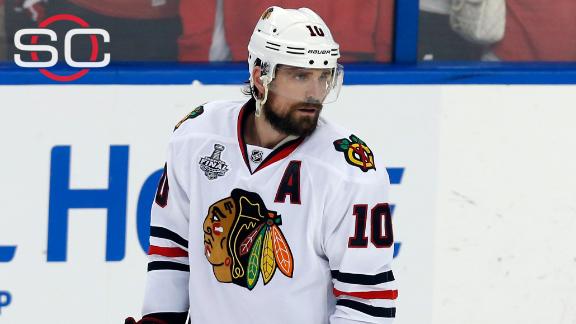 "We thought it was important to acquire some ready-made NHL players," Blackhawks general manager Stan Bowman said on a conference call. "Obviously, it's difficult trading away an established player like Patrick Sharp and a very good young player in Stephen Johns -- he's got a nice career ahead of him. But we felt we wanted to continue to add pieces that can contribute to our team next season, and we're excited for that."

In a statement released by the team, Bowman said: "He was one of our leaders on the ice, most notably as an alternate captain for several seasons, as well as off the ice with his countless contributions and volunteer work with team partners, sponsors and Blackhawks fans everywhere.He will forever be a Blackhawk, and we wish him and his family nothing but the best in Dallas and beyond."

Kane expressed his sentiments on Twitter shortly after the trade was announced:

Dallas is retaining 50 percent of Garbutt's $1.8 million salary in the deal, which will help clear some cap space for the Blackhawks. The Stars will take the full cap hit on both Hawks players, including Sharp's $5.9 million salary.

Johns, 23, was considered one of the Blackhawks' top defenseman prospects. He had four goals and 17 assists in 51 games for the Rockford IceHogs of the AHL last season. He signed with the Blackhawks before the 2014-15 season after spending four years at Notre Dame. He was drafted in the second round in 2010.