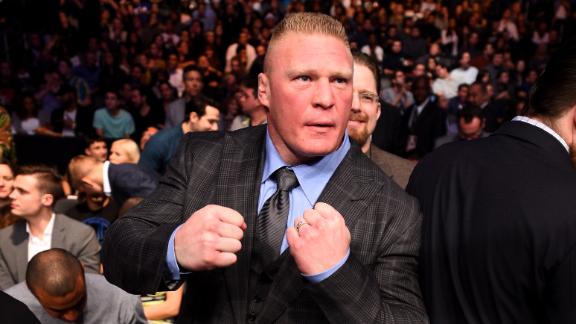 Lesnar, 37, announced on Sportscenter on Tuesday he has re-signed with the WWE, effectively ending all speculation of a potential return to the Octagon.

"I'm officially closing the door on MMA," Lesnar said. "It was hard. I re-signed last night with the WWE."

Lesnar (5-3) is scheduled to appear at Wrestlemania 31 this weekend in Santa Clara, California. His previous professional wrestling contract was scheduled to expire at the end of the month, prompting countless headlines regarding a potential return to the UFC. On Monday, he chose to sign a new WWE deal.

"It was a very hard decision at this stage of my career," Lesnar said. "The fighter inside me wants to compete. The father and husband -- I'm an older caveman now. I make wiser caveman decisions. So, I'm here to say my legacy in the Octagon is over.

"It was a hard decision to make. It took me a year. I've thought about this for a year. At the end of the day, it's all about me wanting to have fun. The last two-and-a-half months I've been training to get back into the Octagon. I felt physically great, but something lacked mentally -- and that's not good."

Late last month, Lesnar was seen cageside at a UFC pay-per-view event headlined by female bantamweight champion Ronda Rousey in Los Angeles. Lesnar said he attended the event purely as a fan and not as a bargaining move.

"He hit me with a text two days before the fight and asked if he could have two tickets," Fertitta said. "It was kind of funny, that fight we had more requests for celebrities than we've ever had but we said, 'of course, we'll get you two tickets.' Then he called back and said he wanted three.

"He just wanted to come to the fight and I think feel it again, feel the energy. Remember what it was like to be part of the UFC."

Lesnar made his professional MMA debut in June 2007. The former NCAA collegiate wrestling champion debuted with the UFC the following year, losing to Frank Mir via submission at UFC 81.

He won his next UFC bout via decision against Heath Herring, which set up a heavyweight title shot against defending champion Randy Couture in November 2008. Lesnar knocked out Couture three minutes into the second round to capture the belt.

After a successful title defense against Mir at UFC 100, which remains the highest-selling UFC PPV of all time, Lesnar was sidelined for one year due to an ongoing battle with diverticulitis, an intestinal disorder. He eventually returned to the cage in July 2010, but lost two of his next three fights.

His last appearance was a UFC 141 in December 2011. Lesnar lost to former Strikeforce champion Alistair Overeem via knockout in the first round.

"I could go back to the Octagon, but what am I going to gain? I was the UFC heavyweight champion of the world. Due to my illness, my career got cut short. That's God telling you, 'it's time to move on.'"