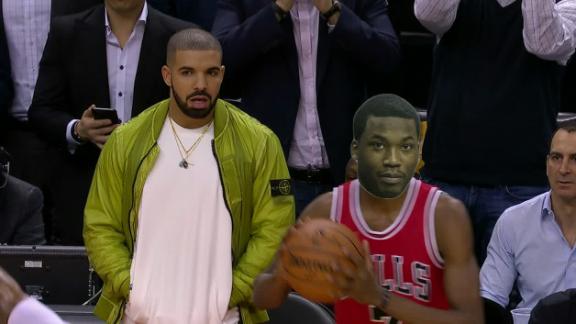 WASHINGTON -- Chicago Bulls swingman Justin Holiday says he did not hear Drake after being called for a five-second violation late in the fourth quarter of Monday night's win over the Toronto Raptors.

The famous rapper was standing directly behind Holiday with 25 seconds left in regulation and the Raptors down 106-103. He appeared to say at least once to Holiday that the Bulls were out of timeouts. After Wednesday's shootaround, Holiday got a good laugh about all the attention the play has received.

"I wasn't paying attention to him," Holiday said. "I was listening to the ref. The ref was talking to me at the time. And I had to focus on getting the ball in the play. I wasn't worried about what Drake was talking about."

Holiday says he is a "big fan" of Drake's and has heard from family and friends about the play.

Holiday didn't think Drake, who serves as an ambassador for the Raptors, deserved as much credit for the play as he has gotten.

"It is what it is," Holiday said. "It's not that big of a deal. He's a fan -- he's a big fan of Toronto, does a lot for them, does a lot as far as supporting them and it's good for him. But at the same time, though, how much credit he's given for that play -- it's people's perspectives but obviously he had nothing to do with the play and what happened with it."

Like many around the Internet, Holiday has seen some of the memes that have appeared after the play.

"That was hilarious," Holiday said. "The one with Meek Mill's face? That mess was funny."

After all the hype surrounding the play, Holiday is just trying to take his new found fame in stride.

"No, he wasn't bothering me," Holiday said. "There were thousands of fans in the building yelling at the same time. It's not like I'm going to hear one guy yelling something. I couldn't hear him that play. Really that play, I wasn't worried about him. I came and took it out again and he said something to me before I got the ball, but that play, no. You can see on my face -- because if I heard him I would have made a face like, ['What?']"