CC Sabathia has swelling in knee 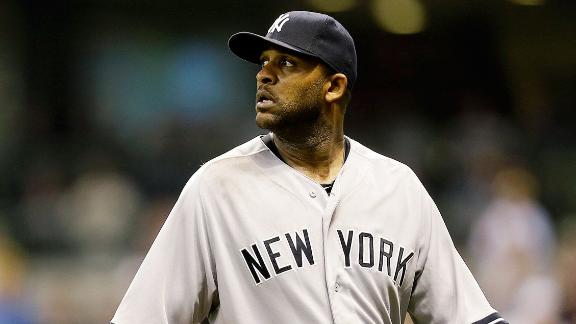 MINNEAPOLIS -- CC Sabathia was aiming to return around the All-Star break, but after waking up with inflammation in his right knee on Thursday, that's unlikely to happen.

Sabathia was roughed up in his rehab start for Double-A Trenton on Wednesday night, lasting 3 1/3 innings, allowing five runs (three earned) on five hits. He had another MRI on Thursday and has been shut down indefinitely, according to manager Joe Girardi.

"We're waiting to see what the next step is," Girardi said. "Can't tell you how long he's going to be shut down. He said nothing during the game about it, he woke up today, and that's the report I got. Today it was swollen, similar to what he's experienced before."

Sabathia's start on Wednesday came off three days of rest and was his second for the Thunder. He's been on the disabled list since May 11 with inflammation in his right knee, and the flare up on Thursday will set back his return date.

The Yankees are 22-26 since Sabathia's last start and were looking forward to getting his arm back in the rotation, as they're 2-8 in their last 10 games entering Thursday. Outside of Masahiro Tanaka, the Yankees' starters have a 4.62 ERA on the season.

Vidal Nuno, who picked up the loss Wednesday against Tampa Bay, has the third-most starts on the season with 14, but has a starter-worst 5.42 ERA.

"It's not what you want," Girardi said of Sabathia. "We were hopeful the swelling would stay away and he'd be in our rotation fairly soon, but that doesn't appear to be the case."

New York transferred Sabathia to the 60-day disabled list on July 1, which ensured he couldn't return until July 11.

With a dearth of quality pitching, the Yankees could be in the market before the July 31 non-waiver trade deadline. But Girardi wasn't about to tip his hand one way or the other.

"Our approach never changes," he said.