Chris Bosh declared out for remainder of Heat postseason 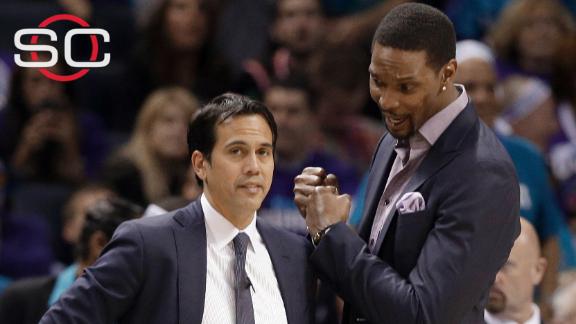 Chris Bosh officially will be out for the remainder of the playoffs, Bosh and the Miami Heat announced in a joint statement Wednesday.

"The Miami Heat and Chris Bosh announce that Chris will not be playing in the remainder of the 2016 NBA Playoffs," the statement read. "The Heat, Chris, the doctors and medical team have been working together throughout this process and will continue to do so to return Chris to playing basketball as soon as possible."

The announcement eases a degree of tension that was building between Bosh and the team over his status. Bosh and the Heat avoided acrimony, and he remained active with the team and traveled to road games on owner Micky Arison's plane, but he appeared to be pushing for a resolution in recent days.

Last week Bosh and his wife, Adrienne, used social media to generate attention to his desire to return to the floor this season. On Tuesday, at Bosh's request, the National Basketball Players Association asked for a meeting with the Heat to address the issue.

It is relevant that Bosh and the Heat released the statement together. Bosh released his own statement in March announcing that he did not have deep vein thrombosis, another name for blood clots in the leg, and said he was positive he would return this season. The Heat had not made a statement on Bosh since February, when an undisclosed medical condition forced Bosh to be ruled out indefinitely.

It is also relevant that the statement indicated the intention for Bosh to return to the playing floor eventually. Players with blood clots have been forced to retire from professional sports in the past. Bosh made it clear with his statement two months ago that he did not believe that would be the case. Until now, the Heat had not clearly stated their position on his future.

The formal meeting requested by the union did not take place, sources said, though it is still planned.

Bosh attended the Heat's practice Wednesday in Toronto but has declined all interview requests.

"I feel for him, and that makes me not want to take any of these moments for granted,"Dwyane Wadesaid. "When you have one of my best friends not able to be out there, and he's doing an amazing job being a great teammate, but I'm sure it'skilling him not to be out there."

"He's been around," coach Erik Spoelstra said. "It's not like he's been away from the team. And I think that's helped. We talk all the time about leadership at all levels. Sometimes it's a different voice at a different time, and the guys have embraced that."

Bosh had expressed a desire to return to action after missing the last 29 games of the regular season and Miami's first-round victory overCharlotte. It's the second consecutive year that Bosh's regular season has ended because of an injury detected over All-Star Weekend.

"Sometimes, the organization feels like they're trying to protect the person,"Heat forward Luol Dengtold ESPN on Wednesday. "It's not just a decision by the organization, it's also the doctors that they trust in. And at the same time, I understand Chris has hisown doctors that he trusts in. At the end of the day, it's got to be between them and sitting down and figuring this out. But I can't say who's right and who's wrong, until you know exactly what's going on, because you're going to hear this and you're going to hear that."

Bosh has blogged several times in recent weeks, on topics including pairing beer with barbecue, sneaker collecting and Kobe Bryant. He also hasthrown out a few Snapchats, including one last week that showed him shooting jumpers, and tweeted that Heat teammates such as Wade and Goran Dragic are his heroes after recent wins.

But he hasn't mentioned his health, and on the Heat injury report, the reason for Bosh's absence is blank.

Bosh did not travel to Canada with the team but flew up to Toronto with Arison in time for Tuesday night's Game 1 win over theRaptors.

"We know we're missing a huge part of our team,'' Wade said.

The Heat wasted a 10-point lead late in Game 1, then went to overtime when Toronto'sKyle Lowrymade a halfcourt shot at the end of regulation. Bosh's words to the Heat going into overtime, his teammates said, helped them get back on trackand win the game.

"It makes you come out and just do a little bit more, because you've got somebody who would kill to be out there, who would do anything just to be on the floor,'' Wade said. "I take that into every game with me, for sure.''

ESPN.com writer Michael Wallace and The Associated Press contributed to this story.