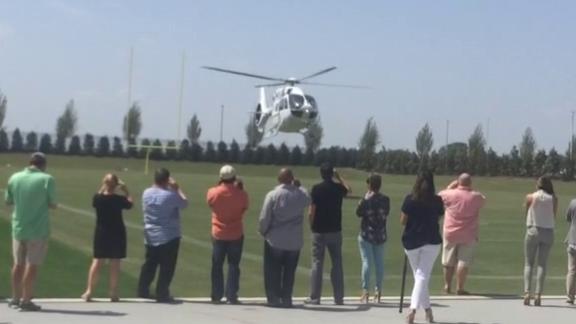 FRISCO, Texas -- With the Dallas Cowboys moving their headquarters to Frisco this summer, who wouldn't need a helicopter?

The Cowboys have purchased an H145 from Airbus Helicopters to help take owner and general manager Jerry Jones, his family and top staff to and from Dallas' new facility, The Star, or AT&T Stadium from Love Field in Dallas.

"It's basically a tool that we want to really use to be a part of the function of the franchise," Jones said.

Jones has a private jet. He has two luxury buses. He now has a helicopter.

The helicopter seats nine with the VIP configuration and can get Jones from his home to Frisco in nine minutes and from Frisco to the stadium in Arlington, Texas, in 13 minutes. It sure beats the traffic that seems to snarl every major highway in North Texas.

"It is state-of-the-art," Jones said. "Certainly it's novel because not many of us ride in helicopters, but this is multiuse, has the best power, has the best speed, has the best range. We're excited about that, and if we could just figure out a way for it to help us make some first downs, we'd really appreciate it."

AT&T Stadium is often referred to Jerry World. Could this be JerryCopter?

"Let's don't call this the JerryCopter," he said. "There's got to be another name there."

How about Jerry Force 1?