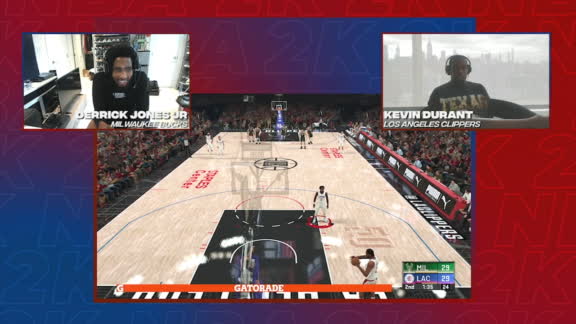 The NBA 2K Players Tournament started with a bang Friday night on ESPN.

No. 16 seed Derrick Jones Jr. upset No. 1 seed Kevin Durant 78-62 to lead off the evening. Jones and Durant faced off in a tense matchup -- this time not on the court, but on the sticks -- as the players queued up for a game of NBA 2K20 in which Jones would select the Milwaukee Bucks and Durant the LA Clippers. Sitting at their homes in Miami and New York, respectively, Jones and Durant competed in a 24-minute game that ended with Jones defeating the Brooklyn Nets superstar.

Evan Turner wasn't at all surprised Jones pulled the upset.

It was a fitting kickoff to the NBA 2K Players Tournament, in which 16 players are competing in NBA 2K20 for bragging rights and a $100,000 donation from the NBA, National Basketball Players Association and 2K to a coronavirus relief charity of their choice. Friday's participants included Jones and Durant as well as NBA notables Trae Young, Zach LaVine, Hassan Whiteside and Patrick Beverley.

Throughout the night, players discussed their home lives amid the coronavirus pandemic that has many Americans, including these players, complying with stay-at-home orders to reduce the spread of the COVID-19 virus. Durant, who is recovering from an Achilles tendon injury suffered in the 2019 NBA Finals, said he has not touched a ball "in a while," while Jones said he has been trying to keep his basketball skills sharp by shooting around on the roof of his Florida home.

Young, who in an Instagram post said he had only started gaming seriously, used the Bucks, who would become a favorite choice across the four matches. The Bucks were picked for three of four games, and players using them averaged 87.7 points per game and held their opponents to a mere 58.3-point average, per ESPN Stats & Information research. During their matchup, Barnes and Young discussed their favorite on-court matchups, with Young saying he enjoyed facing Kyrie Irving and Damian Lillard. Barnes singled outLeBron James, whom he defeated in the 2015 NBA Finals while a member of the Golden State Warriors.

The other two matchups of the night were Chicago Bulls guard LaVine versus Phoenix Suns center Deandre Ayton, and Portland Trail Blazers big man Whiteside versus Clippers guard Beverley. Ayton, using the Houston Rockets, defeated LaVine's Miami Heat 57-41 while the two bantered back and forth over the mic.

During the Whiteside-Beverley matchup, Beverley popped off after a monster virtual slam by Giannis Antetokounmpo. "Stop playing with me, man!" Beverley yelled at Whiteside as he stood up out of his chair. "I'm the best ever!" Beverley would go on to win 84-54 using the Bucks versus Whiteside on the Los Angeles Lakers.