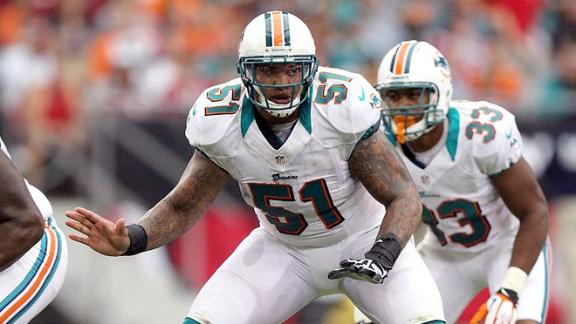 Pouncey is not immune to controversy. In February, Pouncey and former teammates Richie Incognito and John Jerry were named in the Ted Wells report as the primary culprits in the harassment of Jonathan Martin and others.

He found himself back in a tight spot Friday when he posted on Twitter: "Great pick! I can't wait for our gifts he's getting us lol."

The comment didn't sit well with many people on social media after last year's bullying scandal, and even Hall of Fame defensive tackle Warren Sapp weighed in.

Some folks been dumb a long time! pic.twitter.com/Z17T1kOg5T

- Warren Sapp (@WarrenSapp) May 9, 2014Dolphins general manager Dennis Hickey said in a statement released Friday that the matter had been addressed.

The NFL hasn't said if it will suspend Pouncey for his involvement in the bullying scandal.