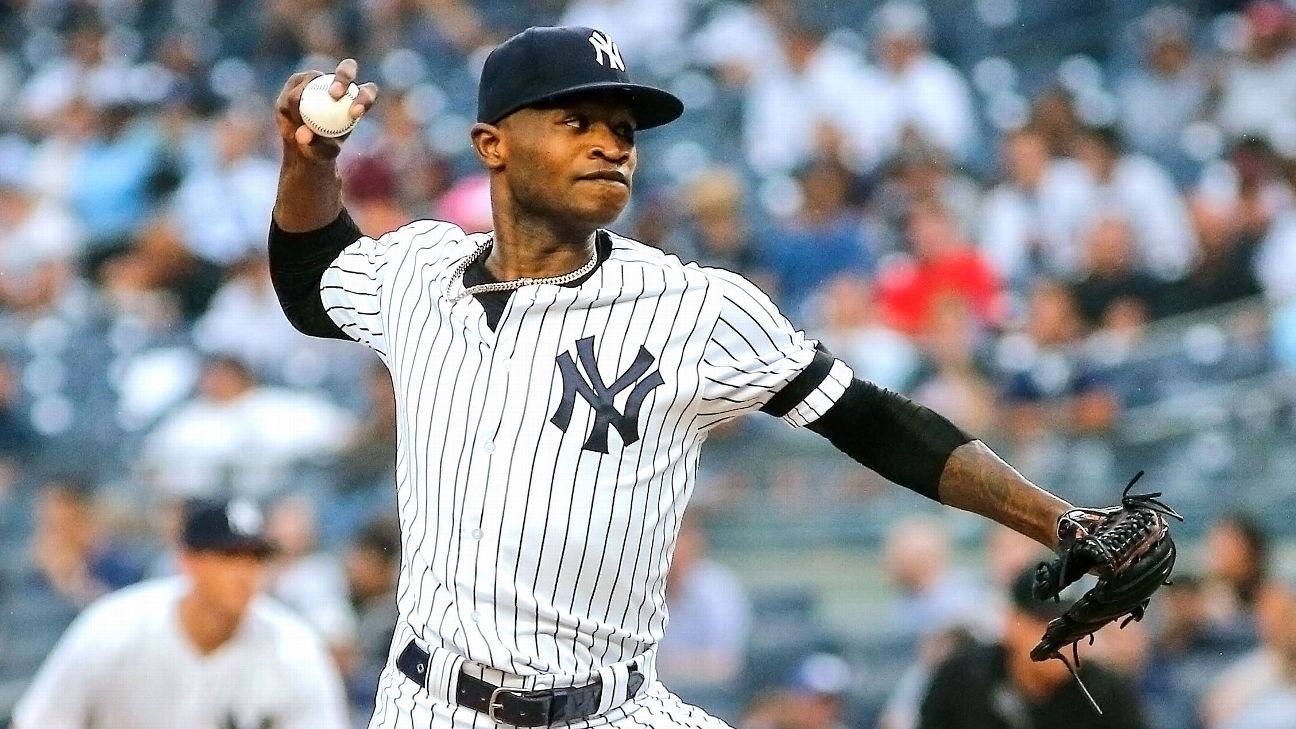 NEW YORK -- Publicly, the New York Yankees manager is continuing to repeat a familiar refrain about his de facto ace. Perhaps it's time he starts to consider stopping.

As good as Domingo German has been, and as good as he projects to be in October, Aaron Boone says that there is no internal worry about his being worked too hard ahead of the Yankees' expected postseason run. As he has reiterated often lately, conversations team decision-makers have yet to happen regarding the pending innings limit their star 27-year-old right-hander should soon be facing.

"We haven't set any hard limits on him. We haven't gotten deep into those conversations yet," Boone said Tuesday night, on the heels of another stellar German gem.

Seven weeks shy of the end of the regular season, the clock is ticking. How long will the Yankees wait before those discussions gain some depth? It shouldn't be much longer.

Maybe ... they already have? On Aug. 2, Yankees general manager Brian Cashman acknowledged on New York's WFAN radio that there was indeed already an agreed upon innings limit for his young pitcher. Asked if he cared to share what it was, Cashman declined.

So why, on the night German improved his record to an MLB-best 16-2 following a seven-inning, seven-strikeout outing in New York's 8-2 win over Baltimore, is his pending innings limit a topic worth discussing?

Namely because he appears to be the Yankees' current best option for shutting down an opposing lineup in the playoffs, and the health of his arm is a paramount concern. Not to mention, with an upcoming Yankees schedule that seems like a comparative breeze, and with the Yankees' ever-widening division lead still expanding, the day when the Yankees consider slowing down German figures to be on the horizon.

"We'll probably get to a point where, as we get some guys back, we may alter some things," Boone said. "But honestly, we feel like he's strong right now and has a lot left in the tank."

Added German, through an interpreter: "I feel really good. Really strong. I feel healthy. I feel like I can pitch for a long time. I just feel that my body's in the right shape and the right place to take on however many more innings are to come."

Including his dominant appearance against Baltimore, German has pitched 116 innings this season. He has in fact lasted six or more innings in 12 of his 20 starts. "Pitch efficiency" has been the catchphrase for the bulk of those outings, as German's tendency to take moderately low pitch counts deep into games has helped him still get deep into the later innings of his starts at this stage of the season.

Tuesday night, for example, he departed after throwing only 93 pitches, just two innings shy of a complete game. German has gone over 90 pitches in a start only eight times all season. He has topped 100 pitches just once.

"That's why he's sitting here having the year he's having," Boone said. "It starts with fastball command, and now you add the other two pitches off of that. That's why he's been so effective."

Set up by his electrifying fastball, a pitch whose velocity was back up a tick Tuesday after being noticeably down in his previous start at Toronto last week, German's breaking pitches caught Orioles hitters off balance. Of the 21 swing-and-misses he induced, 18 of them came off his curve or his changeup.

It has been that pitch-selection balance that has made him the headliner of this year's Yankees pitching staff. While German has shone brightly most of this season, the other starters have either been inconsistent or banged up.

Like seemingly everyone else on the 2019 Yankees, German has had his own injury, a hip issue in June. His worst outings came in starts he made when he tried to play through the injury. But since his return July 3, German has been unbeatable, going 7-0. The Yankees have won all eight of his starts since then.

Cashman and others have been hopeful that time on the injured list earlier this summer would help solve the innings limit concerns they weren't anticipating.

"He already had his time out. That certainly cushioned the blow," Cashman said earlier this month on WFAN. "You'll have to watch how the season played out. But that certainly allowed us to get the breather in there on the arm and the innings limitations that come with him.

"But thankfully we have him. He's really been a breath of fresh air as he's taken the next steps."

If the Yankees found themselves in need tomorrow of a Game 1 starter in the American League Division Series, the choice seems clear -- it would be German.

"He's confident in what he has and what he can do, and it's showing up on the field," catcher Austin Romine said. "He's really getting into a groove and really trusting himself, and trusting his stuff."

At 116 innings, German is just 7 innings shy of the high he set while at the Class A level in the Miami Marlins organization in 2014. It was in November of that year when he was traded to New York, and that following spring, he underwent Tommy John surgery and didn't pitch all of 2015.

Whenever the Yankees do sit down and finally have their sincere conversations about German's innings limit, what will it look like?

"Kind of an evaluation of where he is, how his body is responding, tracking how he's throwing the ball, is it matching up?" Boone said. "How his body is, how we think he's bouncing back, how we think he's holding his lean muscle mass and things like that. All those will be important factors, and then where we are from the standpoint of who we get in here, and where we are in the course of our season, as far as, does there come a time where we skip him? Does there come a time where we shorten an outing, things like that."

In terms of pitching past potential innings limits, the Yankees have done that with young starters in the recent past. In 2017, Luis Severino, the pitcher the Yankees still consider their official ace, blew well past his minor league career high of 113 innings in 2014, throwing 193 innings in his breakout big league season. Severino added 16 innings in the postseason that year.

If that's a guide, maybe the Yankees won't be slowing down German at all. But then again, with the rehabbing Severino able to rejoin the rotation possibly by September, then there will be opportunities for the current ace to be given some relief by his predecessor.

"We'll probably get to a point where, as we get some guys back we may alter some things," Boone said.

It will help making those alterations with Severino's return, but even before then, the conversations about easing German's workload the rest of the way must be had in earnest. 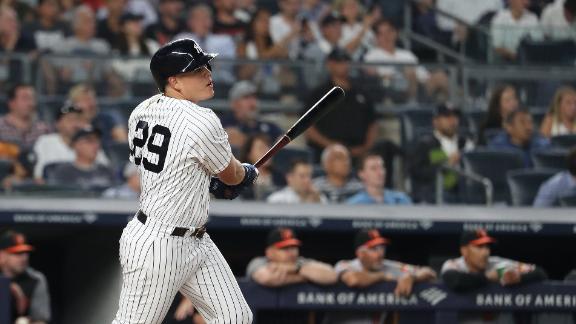