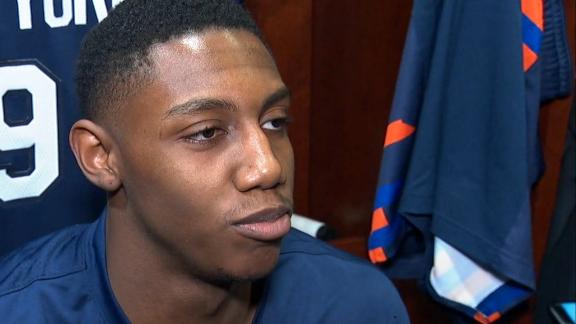 ESPN
NEW YORK -- The New York Knicks didn't have any close games in David Fizdale's final days, then got one right away under interim coach Mike Miller.

Julius Randle's missed free throw ended their chance to win it, but just being competitive again was a good start after a rough couple of days.

Randle missed a free throw with 0.1 seconds left, sending New York to a 104-103 loss to the Indiana Pacers on Saturday night in the Knicks' first game since firing Fizdale.

The Knicks were much more competitive under Miller than they had been in recent games under Fizdale, who was fired Friday. They chased after rebounds and loose balls throughout the fourth quarter, erasing an 11-point deficit and giving themselves a shot at overtime when Randle was fouled while trying to put back the rebound off a scramble.

He calmly made the first free throw but the second was well long, sending New York to its ninth straight loss and a 4-19 record.

"It was tough. Very difficult, but we played really hard," Randle said. "We gave everything that we had. Came up short, but keep doing that and we're going to win a lot of games."

T.J. Warren scored 25 points and Domantas Sabonis had 19 points and 15 rebounds for the Pacers. They bounced back from a loss at Detroit on Friday.

"We knew it was going to be a tough game, whether with the coach or without the coach," Sabonis said. "They are a dangerous team because they play with a lot of energy and the crowd is into it."

The Knicks lost by 44 to Milwaukee and by 37 to Denver in their past two games under Fizdale and he was fired Friday after running practice. The Knicks offered no details about the decision in their news release announcing the firing, and team executives didn't speak Saturday.

Players had held a team meeting Friday to discuss their outlook going forward, even before learning it would be without Fizdale. They responded with a good effort in the first game since the change but couldn't overcome their 40.6% shooting.

Marcus Morris Sr.scored 25 points for the Knicks and Randle finished with 16 points and 12 rebounds.

The Knicks led by two with about 4 minutes left in the third before Indiana outscored them 13-3 to end the period. Warren had a three-point play to start it and Doug McDermott had the final five points of the quarter with a 3-pointer and long 2 to make it 89-81. He made another 3 to open the fourth to make it 92-81.

"When I get to my spots I can be aggressive and productive, kind of make plays just scoring the ball and being myself," Warren said. "My teammates did a great job of finding me early and getting me going."

Pacers: Sabonis, who had a 12-for-12 shooting game here last season, made his first five and finished 8 for 11. ... Malcolm Brogdon sat out because of an injured right hand.

Knicks: Keith Bogans was added to the staff as an assistant coach after previously serving as an assistant for Westchester in the G League. The Knicks also fired assistant Keith Smart on Friday. ... G Wayne Ellington missed the game because of a sore left Achilles tendon.

Knicks players who spoke before the game said they had good relationships with Fizdale and had spoken about the need to step up and take pressure off him. They said management discussed with them the reason for the change, but none of the players shared it.

Knicks: Visit Portland on Tuesday to open a four-game trip.