Fan ejected from Yankee Stadium for yelling out pitch locations 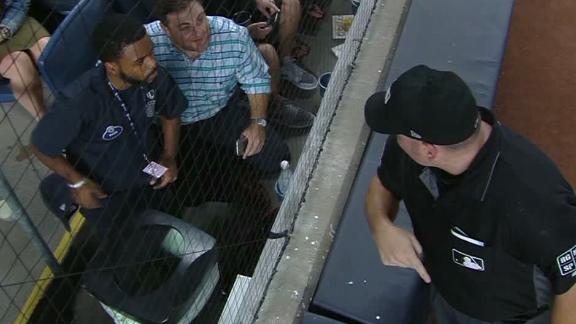 Girardi said the umpire ejected the fan sitting behind home plate for "yelling out location for one or two pitches when Gary was up."

Sanchez was batting with a full count against Austin Pruitt in the eighth inning when plate umpire Dan Bellino walked to the backstop and spoke to a member of the team's security staff, directing that the fan be removed. Bellino then walked toward second base and conferred with crew chief Jerry Layne.

Play resumed after a break of about 90 seconds. Sanchez fouled off a pitch, then hit a bloop RBI single.

Sanchez and Rays catcher Wilson Ramos said the fan had been yelling in Spanish: "Outside! Outside!''

"That was not professional. If you come to the game, you're asked to enjoy the game,'' Ramos said. "Everybody's supposed to see the ball and just react with pitches ... so to me, it's like cheating.''

Both managers praised the ejection.

Said Tampa Bay manager Kevin Cash: "The Yankees handled it really well and got him out of there."

Asked if he was aware of anyone in the Yankee Stadium stands yelling out pitch locations before the umpire alerted him to it, Girardi said, "I heard it one or two pitches."

"That shouldn't happen, and they were removed from the park," Girardi said in reference to the fan's ejection.

Girardi said he had seen something similar happen before, but not at Yankee Stadium.

Said Girardi: "I've heard it at other places."