Five sponsors of Mayweather-Pacquiao fight chip in a record $13.2M 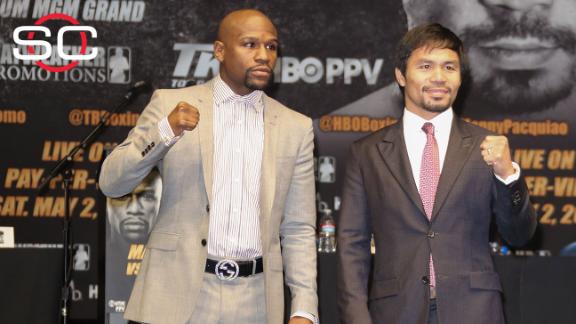 The Floyd Mayweather-Manny Pacquiao welterweight unification megafight on May 2 at the MGM Grand in Las Vegas is expected to shatter all revenue records in boxing history, including for most money generated by sponsors.

Todd duBoef, president of Top Rank, Pacquiao's promoter, told ESPN.com on Friday that their contracts with five title sponsors will add a record $13.2 million to the bottom line of a fight expected to generate at least $400 million, with the vast majority of that money coming from the domestic pay-per-view revenue.

Exact records have not been kept, but the previous sponsorship record is believed to be the estimated $3.5 million to $4 million brought in by some past Mayweather bouts.

Lucia McKelvey, Top Rank's executive vice president of marketing since 2011, made most of the sponsor deals. She also has served as Pacquiao's individual deal agent since 2011.

"We killed it, we blew it out of the water," said McKelvey, who worked with Bruce Binkow of Mayweather Promotions, co-promoter of the fight, on the sponsor deals.

The big one is the $5.6 million sponsorship from Tecate, the official beer of the fight. Tecate has sponsored Pacquiao fights and Top Rank events for several years. Its bid beat the $5.2 million bid from Corona, the beer company that has sponsored Mayweather's recent fights.

The Tecate logo will be prominently featured on the center of the ring mat and adorn fight signage and posters, and the beer will be sold at the arena on fight night.

"We have been sponsoring boxing since 2007 so we have been associating ourselves with boxing and been waiting for so many years for a fight like this," Tecate brand director Gustavo Guerra told ESPN.com. "We know in the past we have had great fights but nothing is going to be compared to what is already called the fight of the century. We wanted to increase our brand awareness and we will achieve it with this fight.

"It is like the Super Bowl of boxing, a gigantic sporting event. It's good for us. It's about credibility. We cannot have the luxury of being out of this fight. This is very important for us."

The other sponsors will also have logos displayed on the ring mat and on various pay-per-view graphics.

Trailers for the new films will be seen between fights on the pay-per-view telecast.

Also sponsoring the fight are the Mexican Tourism Board with its "Mexico, Live it to Believe it" campaign to promote tourism in Mexico, and Smart Communications, a Filipino telecom company that has long sponsored Pacquiao's fights.

Elements of the pay-per-view that will display sponsor logos are the time clock, which will rotate sponsors during the broadcast; the tale of the tape, which displays fighter measurements before each of the three bouts on the pay-per-view telecast; and the CompuBox punch statistics.