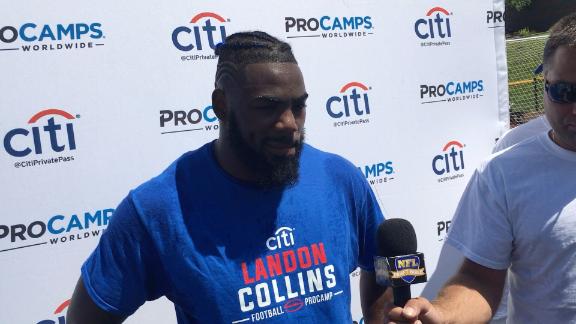 WAYNE, N.J. -- The New York Giants-Dallas Cowboysrivalry is heating up before training camps even open.

Giants safety Landon Collins responded confidently Friday at his Citi ProCamp about his team's chances after Dak Prescott said last week that the Cowboys would win the division.

"I commented right underneath his picture. I said, 'I highly doubt that.' They do not control the [NFC] East. It's over with. We're going to have a run for it. I mean, they're not going to win, I can tell you that much. We're definitely going to take over."

At the ESPYS, Prescott had said:"We're the Cowboys. We're gonna win the NFC East."

The Cowboys (13-3) won the division last season but lost both matchups with the Giants. Prescott threw one touchdown pass in the two games.

The NFC East has not had a repeat winner since the Philadelphia Eagles did it in 2004. The Cowboys have not won back-to-back division titles since 1995-96.

But they're confident entering this year with an offense that is loaded with talent. Many consider Dallas' offensive line the best in football.

It didn't stop Collins from making his bold declaration. He's never shy to express his opinion and confidence.

"Not at all. Coming from the program I can from, the team that I came from, the kind of player that I am, I'm not afraid to say any of those words," he said. "My team, my guys and our organization backs it up every time."

As a burgeoning leader of the Giants, he decided to express his opinion Friday at his inaugural football camp. Some 200 kids in grades 1-8 attended at Passaic County Tech. Institute. His message to the campers was to have fun and work hard, because you never know who is watching.

The rest of the NFL has been watching Collins, and it has made for an interesting offseason after he was named a Pro Bowler and All-Pro for the first time. He said players such as Seahawks quarterback Russell Wilson have come up to him this offseason and complimented him on last year. It's a completely different feeling than the previous year after a trying rookie season.

"Just the respect of knowing who I am, the player that I am and what I bring to the table," Collins said of the reaction he's received.

The Giants are scheduled to report to training camp on Thursday.

"I'm ready to get back. It has been too long," Collins said. "I'm ready to put some shoulder pads in some people. Knock some heads off. "

The Giants open the season on the road against the Cowboys on Sept. 10.