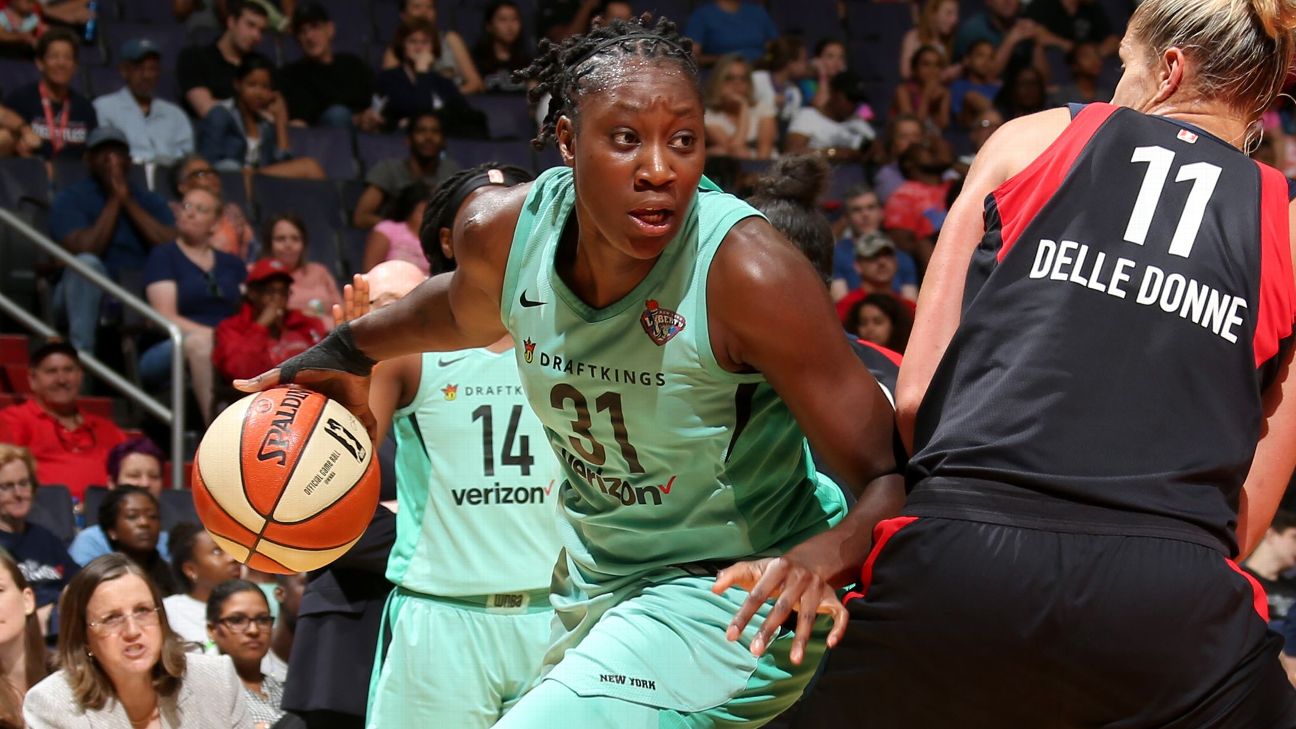 Whenever the Washington Mystics are able to defend their 2019 WNBA championship, they'll have a dramatically different look than the team that hoisted the trophy last October.

The Mystics had already lost All-Star guard Kristi Toliver to the Los Angeles Sparks as part of a more active free-agency period created by the WNBA's new collective bargaining agreement. But Washington made an even bolder change two days before Friday's draft (ESPN/ESPN App, 7 p.m. ET) when the Mystics gave up their first-round pick, entire 2021 draft and reserve wing Shatori Walker-Kimbrough to land 2012 WNBA MVP Tina Charles in a three-team trade with the New York Liberty and Dallas Wings.

Building an offense around Charles, who won MVP playing for Washington coach Mike Thibault with the Connecticut Sun, could require the Mystics to give up part of what made them so special last season --one of the most dominant in league history-- with an aim toward building something just as good or better.

Adding Charles almost certainly means bigger lineups for the Mystics, who typically started 6-foot-2 LaToya Sanders at center alongside 6-foot-5 2019 MVP Elena Delle Donne at power forward last season, with three players 5-foot-9 or shorter around them on the perimeter.

While 6-foot-4 Charles could replace Sanders at center, she's typically preferred to operate alongside another traditional post player who can defend bigger opponents. In New York, Amanda Zahui B. filled that role last season and Kia Vaughn and Kiah Stokes had in previous years. So it's possible Thibault could slide Delle Donne to small forward, filling the hole on the perimeter in the starting lineup created by Toliver's departure.

"It will mean that (Delle Donne) plays more as a 3 (small forward) than a 4 (power forward)," Thibault said on a Zoom chat with reporters Wednesday, "but I think she got a lot more comfortable with that last year than she had been before.

"I don't know if it really matters what you're called in our offense. There are just plays for different people in different spots on the floor."

Washington got experience with bigger lineups featuring sixth woman Emma Meesseman, the MVP of last year's WNBA Finals. According to analysis of lineup data from WNBA Advanced Stats, Delle Donne and Meesseman played somewhat more frequently with another post player (190 minutes during the 2019 regular season) than in smaller lineups as power forward and center (118 minutes).

The distribution changed in the Finals, however, when Thibault wanted to put more quickness and shooting on the court. Of the 73 minutes Delle Donne and Meesseman played together during the five-game win over the Connecticut Sun, just 14 came with another post player.

Going small with Delle Donne, Meesseman and three perimeter players -- five-out lineups that maximize floor spacing because both Delle Donne and Meesseman are dangerous 3-point threats -- will be more difficult to do with Charles on the roster. The durable Charles has averaged at least 31 minutes per game every season of her WNBA career and has missed just 10 games total, which doesn't leave much time for lineups without her.

Even when Washington had multiple bigs on the court, the Mystics' offense rarely revolved around post-ups. Per Synergy Sports tracking, just 8.8% of Washington's plays culminated in a shot, trip to the free throw line or turnover that was generated by a post-up (either in the post or directly from a kick out from the post). That was the league's third-lowest mark. Meanwhile, Charles' Liberty had the third-highest rate of plays concluding from post-ups at 16.8% -- nearly twice as frequently as the Mystics.

Individually, only Brittney Griner of the Phoenix Mercury was responsible for more plays concluding in post-ups than Charles, whose 374 such plays last season was 104 more than anyone else in the league besides her and Griner. That's nothing new. Charles has ranked either first or second in this category every season of her WNBA career, according to Synergy Sports.

Naturally, that includes the three seasons Charles spent playing for Thibault, so he has experience building an offense around her skills. Thibault will be tasked with getting Charles' post-up efficiency back up to where it was prior to last season, when it plummeted as she shot a career-worst 39% from the field.

The spacing Washington can put around Charles -- the Mystics set a WNBA record with 316 3-pointers last season -- should help. On the selective occasions the Mystics did go into the post, they averaged a league-best 1.08 points per play, far better than the runner-up Mercury (1.03).

"In New York, when she was in the low post, she was double- and triple-teamed all the time," Thibault said. "On our team, she'll get more single coverage, or if she gets double-teamed, she's got a lot of really nice options of who to throw the ball to. I think that's a big difference."

Though the Charles deal wasn't completed until this week, Washington has already made a post-friendly move. The Mystics replaced Toliver with veteran point guard Leilani Mitchell, a less dynamic scorer who is one of the league's best spot-up shooters. Mitchell shot 45.5% beyond the arc last season and spent four of the previous five seasons feeding Griner in the post in Phoenix.

Some risk, potential reward for Washington

Though the Mystics ostensibly didn't give up much for one of the WNBA's most accomplished players, there's still risk to this trade. For one, there's the uncertainty over the 2020 season. If the season is cancelled due to the coronavirus pandemic, it's unclear how the league would determine 2021 draft order, meaning a possibility that Washington could send a quality first-round pick to Dallas rather than the late first-rounders the Mystics typically have.

Another risk is financial. Even though Charles will take a smaller salary than what she was guaranteed as a core player, according to Gabe Ibrahim of WInsidr, Washington will only be able to keep 11 players on the roster to start the season. And because Charles has reached the maximum number of possible core designations under the new CBA, she'll be an unrestricted free agent next offseason. Financial concerns limited the Mystics' offer to Toliver, and though Charles is younger, they'll surely be a factor with her next contract too.

Lastly, there's the risk that Washington loses the style of play that made last year's team so special. If Charles is no longer athletically capable of dominating in the post, even with more favorable conditions, the Mystics could end up funneling possessions from more efficient options like Delle Donne and Meesseman to low-value Charles post-ups.

On the plus side, Charles represents something of a hedge for when Delle Donne and Meesseman are unavailable. Delle Donne underwent surgery in January to address the herniated disks that limited her during the Finals, while Meesseman's international residency is a challenge.

"No question that factored into it for us," Thibault said. "Our biggest hurdle with Emma will be getting her in the country once the whole thing is done and whenever we get back to playing. She'll have to go probably through some sort of quarantine once the ban on flying from there is lifted, so hopefully we have enough notice as to when we're going to play to account for all those days, but that certainly was part of it.

"Elena is progressing well with her rehab on her back, but you know, she's had injuries in the past. Both LaToya and Tianna (Hawkins, the team's backup center) have nursed nagging injuries. Tianna had offseason knee surgery. The more depth you can add, it's great."

Meesseman sat out the 2018 season, when Washington was swept by the Seattle Storm in the WNBA Finals, to prepare for the FIBA Women's Basketball World Cup. She also missed a month of the 2019 season for EuroBasket Women, and her Belgian team has already qualified for the upcoming Tokyo Olympics. Charles also gives the Mystics an offensive anchor if and when Delle Donne misses time due to injury. Of the team's eight losses last season, half came in games Delle Donne did not play or left early.

The easy move would have been for Washington to run it back with a team similar to last year's group. Instead, the Mystics will hope that adding Charles' interior presence gives their offense greater diversity.
Report a correction or typo
Related topics:
sportsespnwnbanew york libertydailywashington mysticsuconn huskiesespnw
Copyright © 2020 ESPN Internet Ventures. All rights reserved.
More Videos
From CNN Newsource affiliates
TOP STORIES