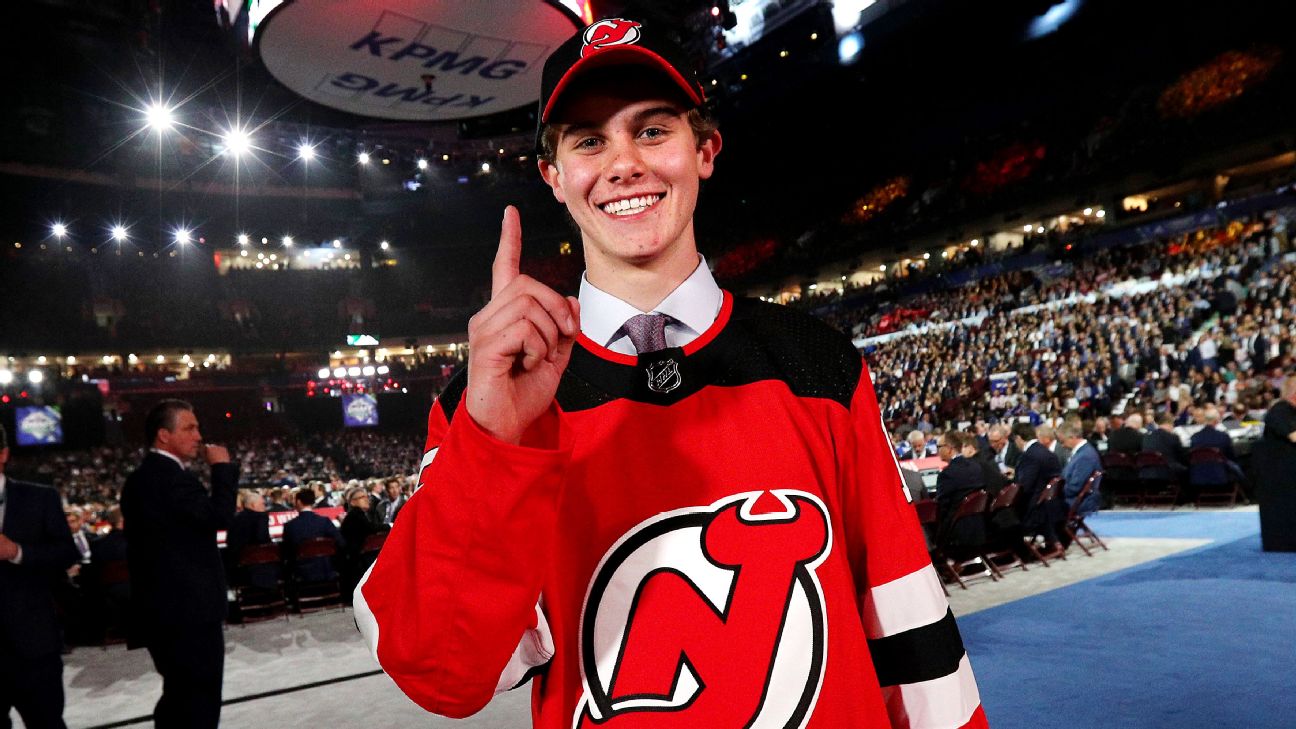 NEWARK, N.J. -- Top draft pick Jack Hughes was a little disappointed on his first night with the New Jersey Devils at their development camp for young players.

Guerrero ran out of gas in the final round and lost to New York Mets rookie Pete Alonso on Monday night.

"It was a fun event to watch. It was pretty cool," said Hughes, who stayed in Toronto after the draft.

There was nothing disappointing for Hughes or the Devils on Tuesday as the NHL team opened its development camp at the Prudential Center.

The 18-year-old playmaking center gave the Devils coaching staff and media a good glimpse of all the skills that made him the No. 1 pick in the draft last month. He buzzed up and down the ice, snapped shots on goal and made passes in tight spots that found open teammates.

Of course, it was just a 45-minute practice and there was almost no hitting. But Hughes showed a lot of the talent that many expect to be on display when the regular season opens in October.

"It was good to get out here and get in a little skate and get our feet under us," Hughes said after the start of the camp which will end on Saturday. "It was good to come out there with the jersey on for the first time."

Hughes, who is wearing No. 86, skated with three dozen other players in the camp, including nine of the 11 players drafted last month. The others are mostly young players who were in the American Hockey League last season and might have had briefs stays with the Devils during the course of the season.

Hughes' hope this week is to learn about playing in the NHL and learning his way around his new home rink.

On the ice, Hughes looked relaxed and right at home.

Hughes is looking forward to some 3-on-3 competition Wednesday and scoring some goals. He had 74 goals and 154 assists in 110 games with the U.S. development program.

"I am focused and ready to play in the NHL," Hughes said. "That's my goal. I want to be successful. It's not really a thing I think about. It's kind of an expectation for me."

Moynihan, who was taken in the sixth round and will play at Providence College next season, has no doubt Hughes will succeed.

"He is an amazing person, first and foremost, and he is a great player," Moynihan said. "With his ability to see the ice, the way he skates, I think he can do anything with this game."
Report a correction or typo
Related topics:
sportsespnnhljack hughesnew jersey devils
Copyright © 2022 ESPN Internet Ventures. All rights reserved.
TOP STORIES
19 children, 2 adults killed by gunman in TX school shooting
Uvalde school shooting: What we know about 19 kids, teacher killed
Jersey City police fatally shoot man after report of shots fired
Fleet Week New York returns to the Big Apple
AccuWeather: Sun and clouds with a cool breeze
'People are getting numb': Texas mom reacts to mass shoot at school
A look at some of the deadliest US school shootings
Show More
Biden to sign policing order on anniversary of Floyd's death
Biden addresses nation on 'horrific' Texas school shooting
Alleged shooter in unprovoked subway murder surrenders
DA: Gang members taunted rivals in rap videos, beat bird to death
Senator begs for gun compromise after Texas school shooting: VIDEO
More TOP STORIES News