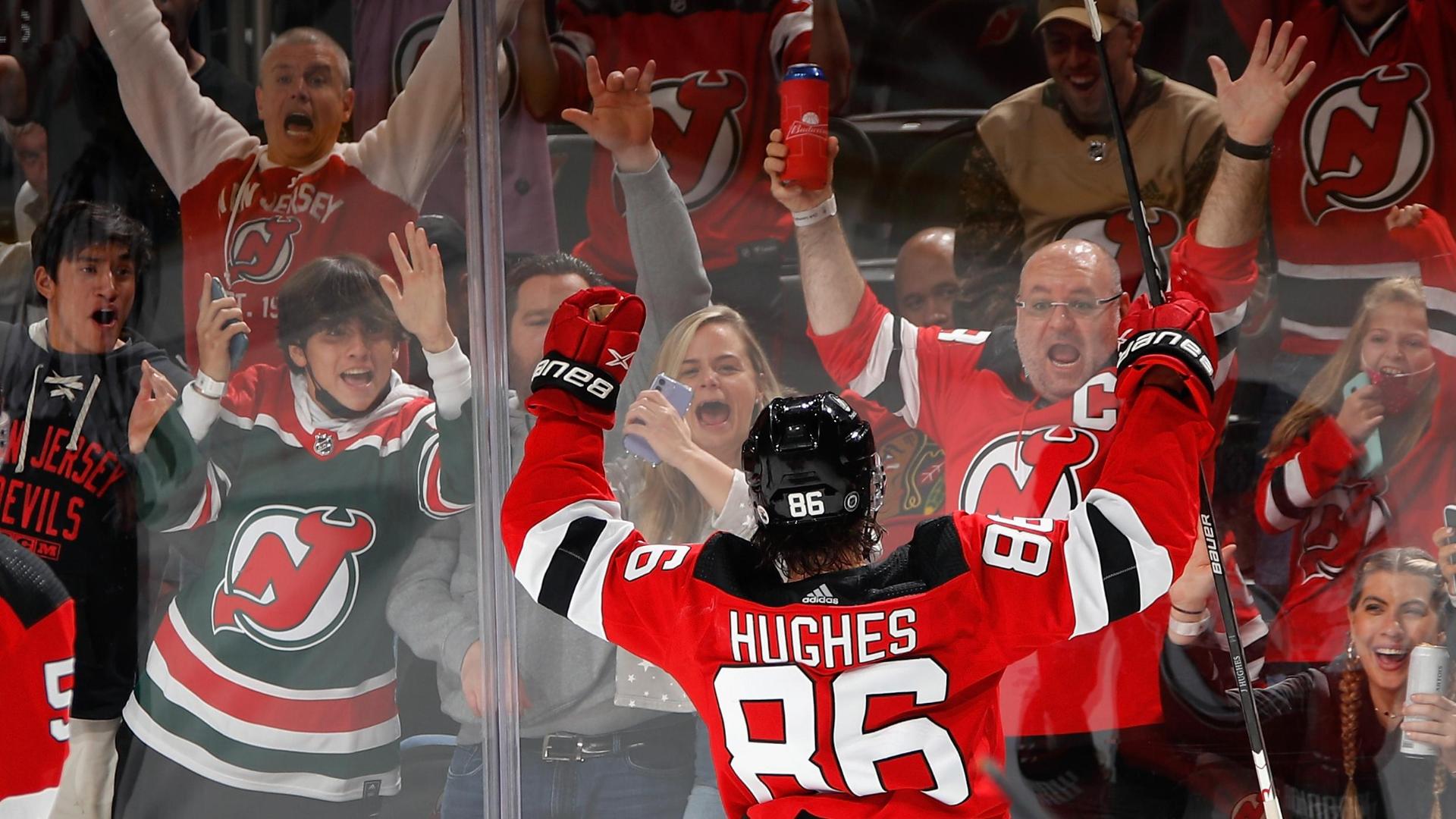 NEWARK, N.J. -- - Not only did defenseman Dougie Hamilton pay instant dividends for the New Jersey Devils, Jack Hughes had a game worthy of a No. 1 overall pick.

Hughes scored his second goal of the game less than a minute into overtime, the high-priced Hamilton scored on his first shot as a Devil and New Jersey posted a 4-3 victory over the Chicago Blackhawks after blowing a late two-goal lead on Friday night.


"I mean it was awesome," said Hamilton, who signed a seven-year, $63 million free-agent contract in the offseason. "It's nice to have that for sure. It's been a while since we had crowds but just to have them back and loud and excited, it was awesome."

The fans got a wild game.

Dominik Kubalik and Kirby Dach of Chicago forced the overtime, scoring in the final 3:53 of regulation with the Blackhawks' net empty.

Hughes got his game winner on an odd-man rush. He faked a shot in close to get Kevin Lankinen out of position and slid the puck into an open net.

"I think it was a 2 on 1 for most of the rink so I had a lot of options going through my mind during the skate and Gravy (Ryan Graves) drove the net so I had the patience and kind of moved the goalie," Hughes said. "I had an empty net after that."

Andreas Johnsson also scored for New Jersey and Jonathan Bernier made 24 saves for the Devils, who are looking to make the playoffs for the first time since the 2017-18 season.

Alex DeBrincat also scored for Chicago, who are off to an 0-1-1 start after revamping their roster. Lankinen made 25 saves after being beaten 17 seconds by Hamilton after the opening faceoff.

"A lot of what they created was when we were sloppy with the puck," said Blackhawks coach Jeremy Colliton, who was happy rallying to get a point.


Dach narrowed the margin to 3-2 with Chicago on a power play after rookie Dawson Mercer was called for a four-minute high-sticking penalty at 12:49.

Dach got his goal on a rebound in close while Kubalik got his second in two games with 25.5 seconds left in regulation.

Hamilton converted a pass from Pavel Zacha between the circles and ripped a shot past Lankinen at 17 seconds. It was the fastest goal to start a season for the Devils. The old mark was 26 seconds by Zach Parise in 2006-07.

DeBrincat tied it 51 seconds into the second period on a power play off a great feed by Patrick Kane.

Hughes put New Jersey ahead with 2:02 left in the period. The No. 1 overall pick in the 2019 draft collected a loose puck in the left circle, spun and beat Lankinen.

Johnsson, who missed the net on a first-period breakaway, poked a loose in the crease into the net after rookie Dawson Mercer hit the goalpost.


The Devils wore the No. 10 jersey and the Blackhawks wore No. 39 during their pregame skate to honor the late Jimmy Hayes. He died unexpectedly in August at the age of 31. He played for both the Devils and the Blackhawks. A video tribute to Hayes was shown in the first period, drawing cheers from everyone in the building. His wife, Kristen, and family members attended the game.

Chicago gave goaltender Marc-Andre Fleury the night off so he can face Pittsburgh. He started his career with the Penguins and won to Stanley Cups with them. ... The Devils were without forward Miles Wood and defensemen Ty Smith and Damon Severson, all with lower body injuries. ... The game was the first between the teams since the Blackhawks beat the Devils 2-1 on Dec. 6, 2019.

Blackhawks: At Pittsburgh on Saturday night.