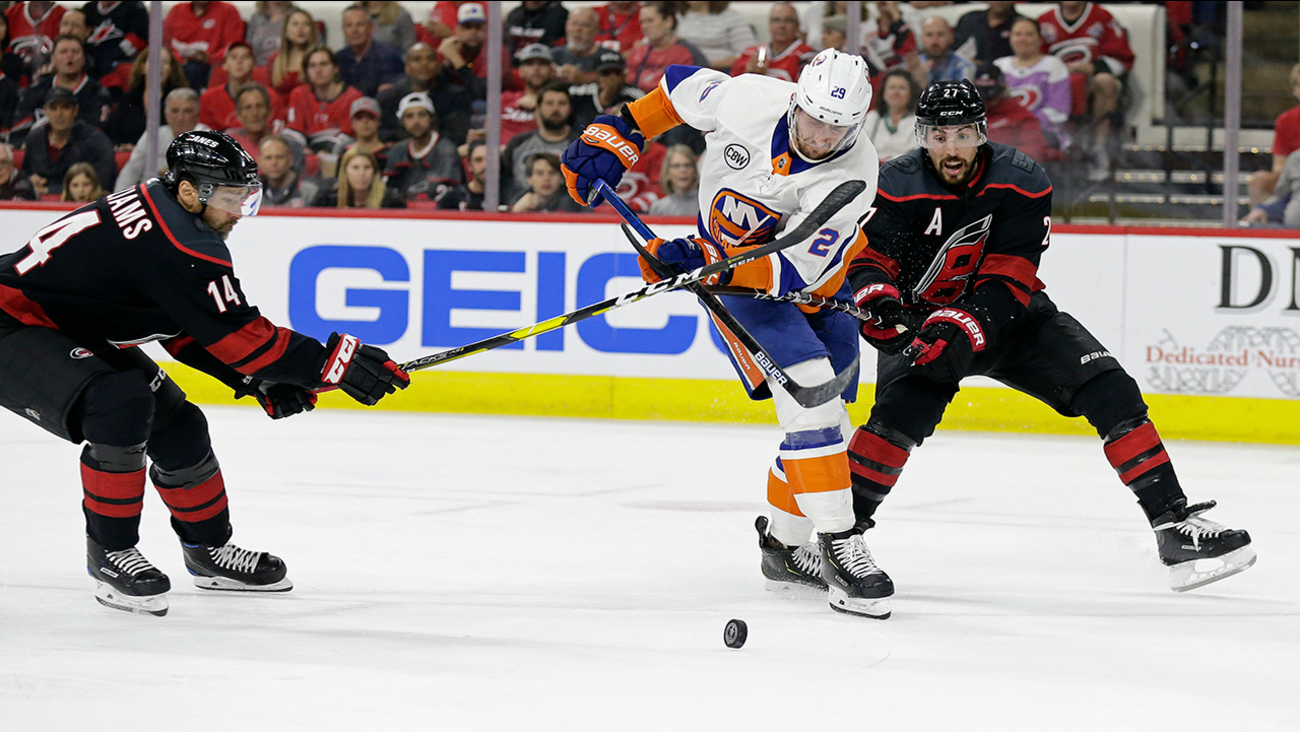 RALEIGH, North Carolina -- Sebastian Aho set up Justin Williams' go-ahead goal with 9:45 remaining, and the Carolina Hurricanes beat the New York Islanders 5-2 on Wednesday night to take a 3-0 lead in their second-round series.

Teuvo Teravainen had two goals, including an empty-netter with 57.1 seconds remaining, Justin Faulk also scored and Aho added another empty-net goal with 4.8 seconds to play.

The wild-card Hurricanes - in the playoffs for the first time in a decade - moved within a victory of a berth in the Eastern Conference final and took a 3-0 series lead for just the second time since they moved to North Carolina in 1997. After losing the first two games of its first-round series with Washington, Carolina has won seven of eight.

Josh Bailey had a goal and an assist and Devon Toews scored on the power play to spark a dormant Islanders offense. New York had scored one goal in the previous two games of this series and its average of 2 goals in its previous six postseason games was the lowest among the eight teams that are still playing.

But it wasn't enough to keep them from a precarious spot. After sweeping Pittsburgh in the first round, the Islanders are in danger of being swept. Only four teams in NHL history have won a series after losing the first three games.

Curtis McElhinney - who at 35 years and 343 days old became the oldest goalie in NHL history to make his first playoff start - stopped 28 shots in place of Petr Mrazek, who is day to day with a lower body injury. After McElhinney made two bang-bang saves in the second period while doing a split, the crowd chanted his first name.

Robin Lehner stopped 34 shots for the Islanders, but his career record against the Hurricanes fell to 0-7.

It took an impressive individual effort for Aho to put the Hurricanes ahead to stay.

After Nino Niederreiter dumped the puck in, Lehner played it behind the net - only to have Aho snatch it in the corner and pass to Williams, who chipped it past the Islanders goalie.

New York couldn't get Lehner off the ice for an extra attacker until about 90 seconds remained, and if Teravainen didn't ice it with his empty-netter in the final minute, Aho certainly did with his.

The Hurricanes have six players dealing with publicly known injuries, but - aside from the injury to Mrazek - they seem to be getting a bit healthier.

Rookie winger Andrei Svechnikov, who had been in the concussion protocol after taking a punch from Alex Ovechkin in Game 3 of the series with Washington, returned to the lineup. And forward Jordan Martinook, who missed the first two games of this series and suffered a lower body injury in Game 4 against the Capitals, also was back.

The most impressive goal of the night belonged to Faulk. As he stormed out of the penalty box after his hooking minor expired, Warren Foegele flipped the puck toward him at the blue line. Faulk plucked it out of the air - like an outfielder tracking a fly ball - and then beat Lehner with a rising backhand with 8:02 left in the second.

The lead didn't last long. Bailey tied it at 2 with 5:47 left when his shot from between the circles got past McElhinney's glove - and then teammate Brock Nelson gave the Carolina goalie's helmet a tap after the play.

It was the second time a Hurricanes lead turned out to be short-lived. Teravainen put them up 1-0 with 13:19 left in the first. Unchecked at the right post, he stopped the rebound of Jaccob Slavin's shot with his left skate, then whacked it in for his fourth goal of the playoffs and third in five games.

Toews - who drew a high stick that sent Warren Foegele to the penalty box - tied it 99 seconds later with a straightaway blast from just inside the blue line through traffic.

NOTES: The last team to win a series after trailing it 3-0 was Los Angeles against San Jose in the first round in 2014. ... Slavin, who assisted on first Teravainen's goal, has a league-best 11 assists during the playoffs. ... Svechnikov rang the post with a wrist shot late in the first, and Williams did it early in the second. ... New York RW Cal Clutterbuck returned after he was helped off the ice during Game 2.