Jadeveon Clowney: I can do it all 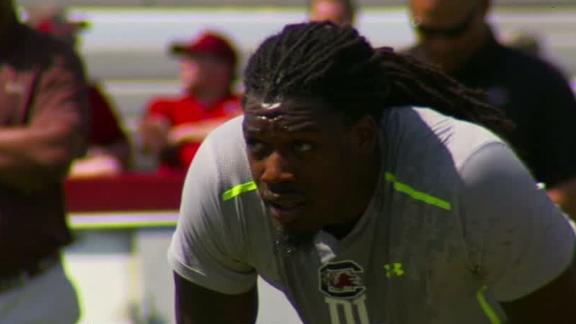 COLUMBIA, S.C. -- South Carolina defensive end Jadeveon Clowney says he should be the first player selected in the NFL draft, and on Wednesday he answered several questions for the Houston Texans, the team with that pick.

The biggest issue surrounding Clowney has been questions about his work ethic, which arose this past season, when he had only three sacks after having 13 the year before. Texans coach Bill O'Brien and general manager Rick Smith said they have no concerns about that after having dinner with the 6-foot-6, 266-pound Clowney on Tuesday and then watching his pro day workout at Williams-Brice Stadium on Wednesday.

"I am satisfied with his work ethic," Smith said. "Those questions have been answered for me. I'm satisfied with the information I got and my interpretation of his level of effort, as well."

A question for the Texans specifically was whether Clowney could play outside linebacker in their 3-4 scheme. O'Brien and Smith said they were satisfied he can after watching him go through position drills for coaches and scouts from 30 of the league's 32 teams. Only the Cleveland Browns and Tennessee Titans did not attend.

"I do," Smith said. "He's athletic enough, he's got enough speed and explosiveness and change ability, all those things that you look for."

But will he be the first pick?

"I'm not telling you," Smith said with a laugh. "We're in our process. We're every day getting closer to draft day and there is an excitement level that is continuing to build."

The Texans also are evaluating whether to draft a quarterback with the first pick. O'Brien said the process remains "wide open."

Clowney has no doubt he should be No. 1, and he explained why.

"I can pretty much do it all," he said. "Anything on defense I can help. I can be a playmaker. I am a playmaker. I've got what it takes, I believe, to go out there and set the tone for the next guy coming up. And to help my team out winning games.

"Every team I've ever played with, we've never had a losing season. Never. Before I got there, I watched them lose. Not just here. Back in high school, middle school. I was like, 'Man, that ain't going to be my team when I play on that team.'"

South Carolina never had won more than 10 games in a season before Clowney arrived. The Gamecocks were 11-2 in each of his three seasons. The Texans are coming off a 2-14 season. Asked if Clowney is the type of player who could turn things around, Smith said, "Any time you've got a guy that has that kind of height, weight and speed ratio with the explosiveness, the instincts, the football instincts that he has, he's a guy that can impact a football game."

"Any time you're drafting in the first round, you look for impact players and he certainly is that type of player," he added.

The Texans already have one of Clowney's former South Carolina teammates on their roster in second-year strong safety D.J. Swearinger.

"I spoke to him," Clowney said. "I said the defense will be one of the best [if they draft me]. With [Pro Bowl defensive end] J.J. Watt up there already, with me playing beside a guy like that, I'll be great."

And Clowney has no doubt he can play outside linebacker.

"I can play every position on the field," he said. "I'm an athlete. Whatever they want me to play, I can be good at it. I have no problem dropping and moving."

Clowney has visits set up with the Atlanta Falcons (sixth pick) and the St. Louis Rams (second and 13th picks). Smith said the Texans also plan to bring him to Houston by the end of the month.

And yet the Texans maintain they are far from ready to commit to Clowney, considered by many to be the best overall athlete in the draft.

"Wide open," O'Brien said. "They moved the draft back two weeks, so we've got plenty of time."

Clowney Wants To Go No. 1
Gamecocks DE Jadeveon Clowney assesses his pro day performance and discusses his desire to be taken No. 1 overall in the NFL draft.