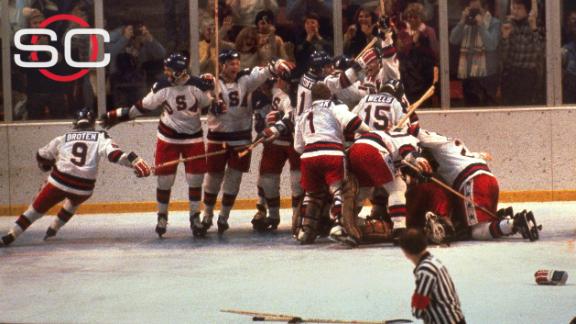 "Miracle on Ice" goaltender Jim Craig hopes to sell nearly all his memorabilia from the 1980 Olympics in one 19-item lot for an asking price of $5.7 million.

The lot includes his game-used jersey from the famous 4-3 game against the Soviet Union, his Olympic gold medal and the famous American flag he draped over his shoulders after the United States defeated Finland in that final game.

Those three items alone were appraised by Lelands.com at more than $1 million each. Lelands.com is selling the collection for Craig.

"For the past 35 years, these items have been at the Hockey Hall of Fame, the Boston sports museum, the New York sports museum, and I think we've done a good job showing them because this moment was so big that I truly believe everyone was a part of it," Craig told ESPN.com. "But after the 35th anniversary [this past February], and after our teammate Bobby Suter died, I thought it was important to be responsible with these pieces to grow and protect the legacy for my family."

Craig, who has made a living giving motivational speeches, has a 26-year-old son and a 24-year-old daughter.

"And my wife certainly doesn't want to see pictures of Jim Craig all over the house," Craig joked.

Craig said he insisted on selling the collection together so that one person could buy it and continue to display it. Continuing to own the items, he said, took its toll on him.

"Unfortunately you think about this stuff getting stolen all the time," Craig said.

Although another person has claimed to have possession of the flag that Craig had draped over himself after the gold-medal game, Craig said the genuine article is the one presented to him in 1998 by Peter Cappuccilli Jr. Cappuccilli said he gave Craig his flag after the game and recovered it when it was lost on the ice.

Eighteen years later, Cappuccilli met Craig at the AHL All-Star Game to give it back. Lelands had the flag photo-matched and authenticated and is confident that Cappuccilli's flag is the genuine article.

Craig wouldn't be the first from the famous "Miracle on Ice" team to sell his items.

Although the price takes most collectors off the market to win Craig's items, Craig said many people might be encouraged to bid because they were touched by the "Miracle on Ice" moment.

"We learned more and more every day how important it was," Craig said. "From letters, to people telling us their stories on Facebook and on Twitter. We were just a bunch of humble guys, and the American people embraced us and our team because we were the truth."

Also included in the lot is the outfit Craig wore at the 1980 Olympics opening ceremony, his 1980 Sports Illustrated Sportsman of the Year Award, his Olympic ring, a gold-medal-winner watch and a 1980 Olympics winter coat that he wore.

The record for the most expensive hockey item at auction was the jersey worn by Canada's Paul Henderson in the 1972 Summit Series against the Soviet Union. That jersey sold for $1.275 million in 2010. The record for the most paid for a piece of Olympic memorabilia was set in 2013, when billionaire investor Ron Burkle paid $1.46 million for a 1936 Olympic gold medal won by Jesse Owens.