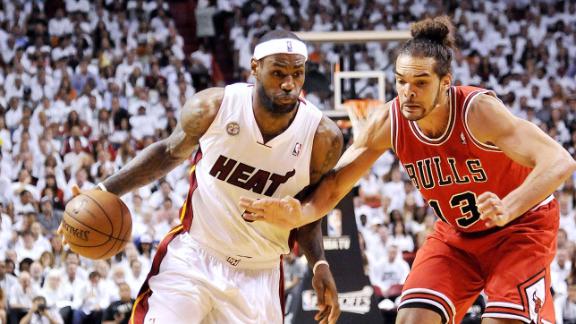 LAS VEGAS -- Chicago Bulls center Joakim Noah knows that in order to win a championship this season, he and his team are going to have to push through an opponent that has repeatedly stood in their way: LeBron James.

"Every time LeBron steps onto the court he's affecting the game," Noah told ESPNChicago.com on Sunday during a promotional event for Adidas. "He's the best player in the game, but that being said, I think we have a chance to beat them. And that's the goal. We want to beat LeBron James, we want to beat the Miami Heat, we want to beat all those teams who are in our way. He's obviously one of the big obstacles."

The emotional leader of the Bulls is excited about the roster moves his team has made over the past few weeks and is confident they can overcome James and the Cleveland Cavaliers this season.

"It's not about him. It's about us," Noah said. "It's about our team and being the best team that we can be, then time will tell."

Noah understands the expectations that are out there for the Bulls, but he is trying not to worry about the hype right now. He is making his way back from arthroscopic left knee surgery he had on May 2 and says he will be "ready" for training camp. He spent some time playing light 3-on-3 on Sunday and realizes that with a healthy Derrick Rose back in the fold, the Bulls will be expected to contend for a title.

"It's hard to say because a lot of things have to go your way to win a championship and I understand that," he said. "But I know that it's a long grind; right now, to win a championship, you have to take it step by step. You have to be focused. You have to be healthy, you have to have good team chemistry, so there's a lot of factors. I think [the front office] put together a good core. And now, the only thing left to do is get to work and see how far we can take it."

Noah is confident in the moves Bulls executives Gar Forman and John Paxson made in the offseason, including adding Pau Gasol, European star Nikola Mirotic and rookie Doug McDermott. The Bulls have also been mentioned as a possible landing spot for Minnesota Timberwolves forward Kevin Love, who recently dropped out of Team USA's training camp because of the lingering uncertainty regarding his status. Whether the Bulls end up with Love or not, Noah sounds emboldened by the group the Bulls have in place now.

"I think we've had a lot of very solid additions," he said. "I think Tony Snell had a very good summer league. He's somebody who I expect to contribute for us, and the rookie as well, McDermott. Then, you see Pau and Mirotic and all those guys, even Aaron Brooks. Everything that [the front office] did, and bringing our guys back, I think is going to be great."

Like many within the organization, Noah is also confident Rose will come back and play at a high level.

"I think he's in very good spirits," Noah said of Rose. "I think he's very excited about getting back onto the court. As an athlete, the hardest thing you can go through is injuries. He's obviously had to go through a lot the last couple years, but he's been extremely focused and I'm excited for him to get back onto the court, see what he does in the world championships, and then get ready for a big season."

Rose is scheduled to begin practicing with Team USA on Monday as it prepares for the World Cup of Basketball in Spain, which begins in late August. He is the great unknown for the Bulls this season. He has played in just 10 games the past two seasons because of two serious knee injuries, but Noah remains upbeat that Rose will be the player everyone remembers.

"I think people's expectations don't mean anything," he said. "I think it's just important not to put too much pressure on yourself and just be the best that you can be. Derrick always has that mindset to be the best. He's sacrificed a lot in the summer to get to where he's at right now and he's somebody who always pushes himself, so I'm never worried about him."

Noah said the idea of winning a title with Rose is something that has pushed him throughout the summer after all that both have endured over the past few seasons.

"Every day I work out, that's all I think about," Noah said, "is just how great that party would be after we win the championship. But I know to get there there's going to be a lot of ups and downs. It's always a rocky road. It's never smooth in the NBA. But I love our team, and now it's on us to get to work."