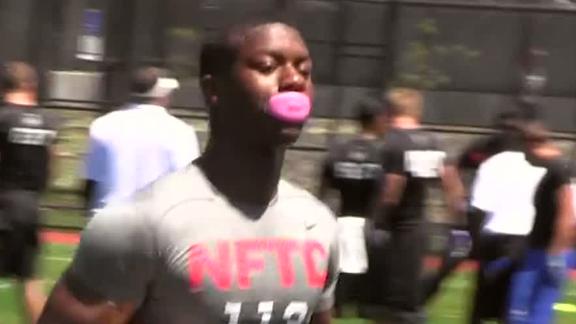 Oklahoma freshman running back Joe Mixon was charged Friday with misdemeanor assault stemming from an alleged incident in which he was accused of punching a woman in the face.

According to the Cleveland County district attorney's office, the penalty for an act resulting in gross injury could be up to one year in jail if convicted.

Oklahoma has not made a decision on Mixon's status.

"The University of Oklahoma understands that charges have now been filed against Joe Mixon based upon an investigation by local law enforcement agencies,'" athletic director Joe Castiglione said in a statement. "Under its policies, the university must independently evaluate student conduct matters and will review the facts as part of its internal process. At an appropriate time, the university will determine Mixon's status."

The alleged incident occurred at Pickleman's Gourmet Cafe on July 25. According to the incident report, Amelia Rae Molitor, a 20-year-old Oklahoma student from Euless, Texas, told police that Mixon punched her, breaking four bones in her face.

Mixon's attorney said his client had done nothing wrong and was protecting himself "from a very intoxicated and troubled young woman."

The district attorney declined Friday to file charges against Molitor after the Norman police department submitted the findings of its investigation.

Mixon was the top signee in Oklahoma's most recent recruiting class. The Oakley, Calif., native was rated the No. 6 running back recruit in the country.

Before the alleged incident, Oklahoma coach Bob Stoops said in an ESPN radio interview on "The Herd With Colin Cowherd" that Mixon would have a chance to start in the backfield for the Sooners.

Mixon was suspended from football-related activities before the Sooners started preseason practice.