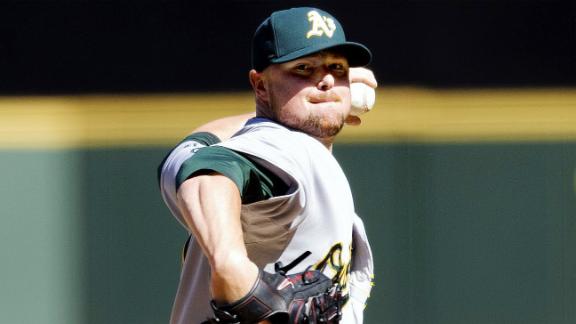 The free-agent pitcher has plans to meet with the World Series champions next week, a source told ESPN's Jim Bowden.

San Francisco has need for a front-line starting pitcher and was expected to get busy in the free-agent market after losing the slugging third baseman to the Boston Red Sox. Lester would join World Series MVP Madison Bumgarner to give the Giants two top left-handers at the top of their rotation.

Lester, who turns 31 in January, was dealt by the Red Sox to the Oakland Athletics at the trade deadline in July and helped the A's reach the playoffs for the third straight year before a 9-8, 12-inning loss to Kansas City in the AL wild-card game.

Giants right-hander Matt Cain is recovering from elbow surgery that ended his season in July and right-handerRyan Vogelsong is a free agent. Manager Bruce Bochy has said two-time NL Cy Young Award winner Tim Lincecum, who played a minimal role this past postseason, will begin the 2015 season in the rotation. Tim Hudson, a 39-year-old righty signed through '15, rounds out the current starting staff.