Jonathan Toews: Blackhawks need to stick together through Kane situation 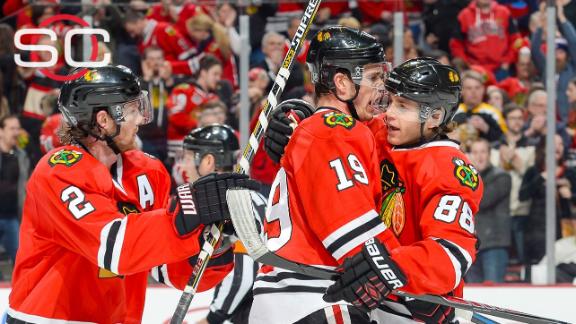 Asked on TSN 1290 how he handles a situation such as Kane's, Toews said: "I think you've just got to have confidence that things like that will resolve themselves over time. And for the time being, you stay together as a team, you support your teammate, teammates that are maybe going through a rough patch."

Toews used an example from last season, when the Blackhawks had to push past rumors involving Patrick Sharp's and Duncan Keith's personal lives.

"We saw it last year with some rumors that spread through social media about several guys in our locker room," Toews said. "It's not the first time we've seen situations like that. Eventually you just deal with it internally, you stay together as a team, and you're confident that as individuals and as a group, everyone kind of stays together. And at the end of the day, we always say to each other what is said and what is done within the locker room is the only thing that really matters. We don't let anything going on on the outside affect the way we do our job and the way we come to work together as a team."

Kane is under investigation for an incident that allegedly occurred at his home in Hamburg, New York. The investigation is of an alleged sexual assault, The Buffalo News has reported.

Kane and Toews agreed last summer to matching eight-year, $84 million contracts. Their deals are set to go into effect this upcoming season.

Kane has 205 goals and 352 assists in 576 career NHL regular-season games over eight seasons with the Blackhawks. He had 11 goals and 23 points in 23 playoff games last season while helping the Blackhawks win their third Stanley Cup in six seasons.

The Blackhawks open training camp Sept. 17 at the University of Notre Dame.