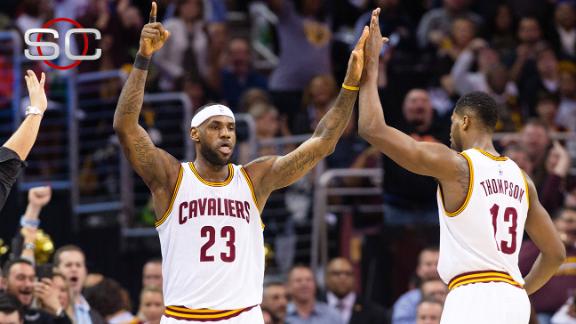 Love was struck in the right eye by Mario Chalmers in the third quarter of the Cavs' 113-93 win over the Miami Heat and did not return to the game.

He was to travel with the team to Chicago on Wednesday night. The Cavs said Love's injury would be re-evaluated Thursday and that they would update his status for that night's game at that time.

"It was blurry for about 20, 30 minutes, but I was able to regain my vision and feel fine now," Love said after the game. "So I'm just happy that we were able to sustain the lead and get the win."

He said it was a scary moment.

"It always is," he said. "That happens throughout the course of a season to a couple guys; it just happened to be me tonight."

The contact occurred when Love was battling for a defensive rebound with 9:48 to go in the third quarter. He immediately covered his face and made his way toward the Cavs' bench, where he rested on the floor while being evaluated by trainer Stephen Spiro.

Love eventually was helped to his feet by several teammates and headed to the locker room.

While being attended to in the locker room, he tried on protective goggles that he potentially could wear against the Bulls.

The injury is the latest challenge for Love after offensive struggles and a social media saga stemming from a LeBron James tweet.

Love finished with 12 points on 5-for-8 shooting, six rebounds and four assists against the Heat.

The seven-year veteran was coming off a season-high 32 points Sunday after an extended slump and was able to impact the Miami game before his night was cut short.

"I thought Kevin was terrific," Cavs coach David Blatt said. "I thought he was the best player on the court until he went down -- passing, shooting, defending, rebounding. Really being a big part of what we were doing during the course of the game."