Manu Ginobili's made 3-pointer on attempted pass confuses all 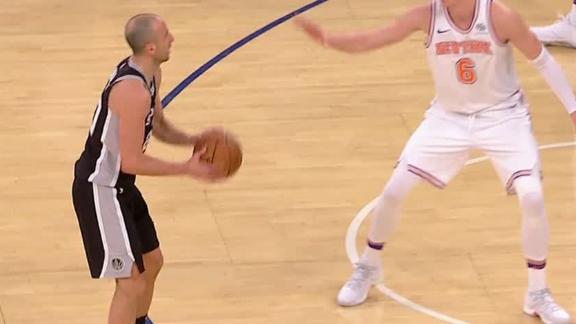 "I did not [see the ball go in], in all honestly. I did not," Popovich said. "Then everybody started grabbing me and saying the ball went in. I said, 'Yeah, the ball went in!' I acted like I knew what was going on."

Popovich, the referees and many players on the court didn't see Ginobili's attempted lob pass to LaMarcus Aldridge go through the hoop midway through the third quarter in the Spurs' win over the Knicks. New York forward Michael Beasley immediately retrieved the ball as it bounced toward the free throw line and started dribbling toward the Knicks' basket.

"I thought it was a rebound," he said. "I definitely didn't see the ball go in."

In a bizarre sequence, referees allowed Beasley to bring the ball down the floor, unaware that the basket should have counted. Ginobili and his teammates tried to get the referees' attention while the Knicks advanced the ball.

"I went crazy because once you make a shot like that you want it to count," Ginobili said after scoring 12 points in the Spurs' 100-91 win. "So yeah, it was very awkward, but common sense, I guess. The refs reviewed it and we got it."

Referees eventually credited the basket to Ginobili but incorrectly ruled it a two-point basket. After a review at the end of the quarter, it was changed to a 3-pointer.

"I've been working on it for a long time, I finally was able to take it," Ginobili said, jokingly. "I just threw it up because [Aldridge] was being fronted. I had to do it quick because he'd been there for a couple of seconds. And I guess I threw it too hard. And it went perfectly."