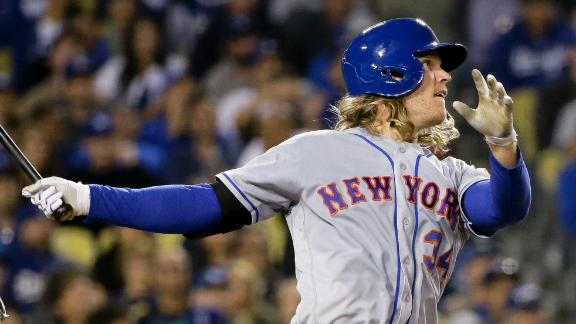 One day shy of the one-year anniversary of his major league debut, Noah Syndergaard became the second pitcher in franchise history to hit two home runs in a game as New York Mets pitchers continue to be lethal with their bats as well as their arms.

Syndergaard hit a solo homer in his first plate appearance then hit a three-run shot in his next trip to the plate against Los Angeles Dodgers starter Kenta Maeda. The Mets went on to a4-3 win Wednesday.

Syndergaard said his immediate thought after his second homer was "that this is a dream, it's not real."

"I don't think I ever hit two home runs when I played little league," Syndergaard said. "To be able to hit two home runs in a big league ballgame, especially with a pitcher like Maeda up there, it's an awesome experience."

Syndergaard became the only pitcher in the majors with three home runs of 400 or more feet since he made his debut on May 12, 2015. Jake Arrieta ranks second with two. Syndergaard's homers Wednesday went 407 and 400 feet.

"I think I'm a pretty decent hitter," Syndergaard said. "I feel like I'm pretty comfortable up there."

It has been an eventful week for Mets pitchers. Colon, 42, on Saturday at San Diego became the oldest player in major league history to produce his first major league homer.

Mets pitchers are 6-for-15 with two doubles, three homers, seven RBIs and four runs scored during this turn of the rotation. The only weak link the past five days might be the best hitter: former college shortstop Jacob deGrom, who went 0-for-2 against the Dodgers on Tuesday.

Colon faces a tough task in trying to answer Syndergaard in Thursday's series finale. He will step into the batter's box against Dodgers ace Clayton Kershaw.

The only other pitcher in Mets history to hit two homers in a game was Walt Terrell, who did it against the Chicago Cubs at Wrigley Field on Aug. 6, 1983. Terrell turned 58 on Wednesday.

Arizona's Micah Owings on Aug. 18, 2007, was the last pitcher with a two-homer game. The Boston Braves' Jim Tobin holds the modern-day big league record for pitchers with three home runs in a game against the Cubs on May 13, 1942.

In a tweet, Owings congratulated Syndergaard on matching his feat, referencingMax Scherzer's 20-strikeout performance for theWashington Nationalsearlier in the night.

Only two major league pitchers have produced four-RBI games since the start of last season. The other? Mets starterSteven Matz, who did it in his major league debut on June 28, 2015, against the Cincinnati Reds. Their four-RBI performances matched the franchise record for a pitcher.

Syndergaard allowed two runs on six hits and one walk in eight innings Wednesday. He struck out six.

He finished 2-for-4 with two strikeouts at the plate, although he twice ripped foul balls before fanning in the sixth. He had been 0-for-8 this season. He had only one previous career homer, last May 27 against Philadelphia, and had just four career RBIs coming into Wednesday.

His power display gave the Mets 51 homers through their first 33 games to lead the majors. They have hit 49 in the past 25 games and lead the majors with 35 homers on the road.