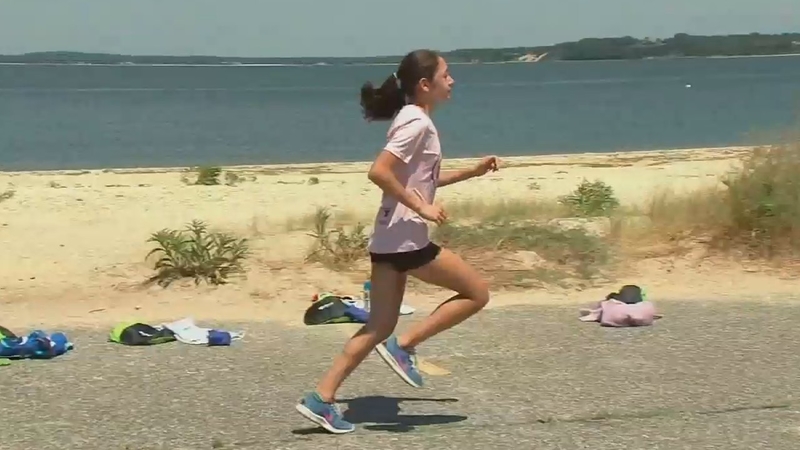 SAG HARBOR, Long Island (WABC) -- This week dozens of middle schools girls will bike, swim and run their way through their first triathlon.

The free program on Long Island isn't just about getting exercise, it's about confidence and pride with one big accomplishment.

If you told these middle school girls a few months ago they would complete a youth triathlon, they probably wouldn't believe you.

"Do you feel like you've learned about yourself during this process?" Eyewitness News Reporter Kristin Thorne asked.

"What have you learned?" Thorne asked.

"That if I can try hard enough I can complete a lot of things," Kiara said.

They're part of a program called i-tri.

"We have 120 girls from six different schools on the East End of Long Island," said Theresa Roden, i-tri.

It's the brainchild of Roden.

"She teaches you to love yourself and love everything around you," said Pamela Ramirez, past participant.

Roden got the idea after completing a triathlon herself.

"I just felt like, wow, I did this, anybody can do this," Roden said.

"It gets them out. It gets them motivated, and they're working as a team," said Kelly Roesel, parent.

"Quite a few of them come to us not being able to swim or riding a bike, and when they tell us that we get so excited because we know what's going to happen, we know those are the girls who are going to have the biggest transformation," Roden said.

The girls' skills will be put to the test this Thursday as they compete against dozens of other young people in the BNB Hamptons Youth Triathlon at Long Beach.

The program is about more than the physical training.

"Once a week we have an empowerment sessions and that's where we work on things like visualization and affirmations and goal setting," Roden said.

Girls who completed the program are invited back as coaches and mentors, like Noely Martinez.

"During the first year that I did it I was going through some personal things, family problems, really," Martinez said. "Theresa was just an answer to my prayers and to my family because she helped me come out of the shell that I had."

"Each and every one of them grows in a way that's pretty impressive, remarkable," said David Powers, board member.