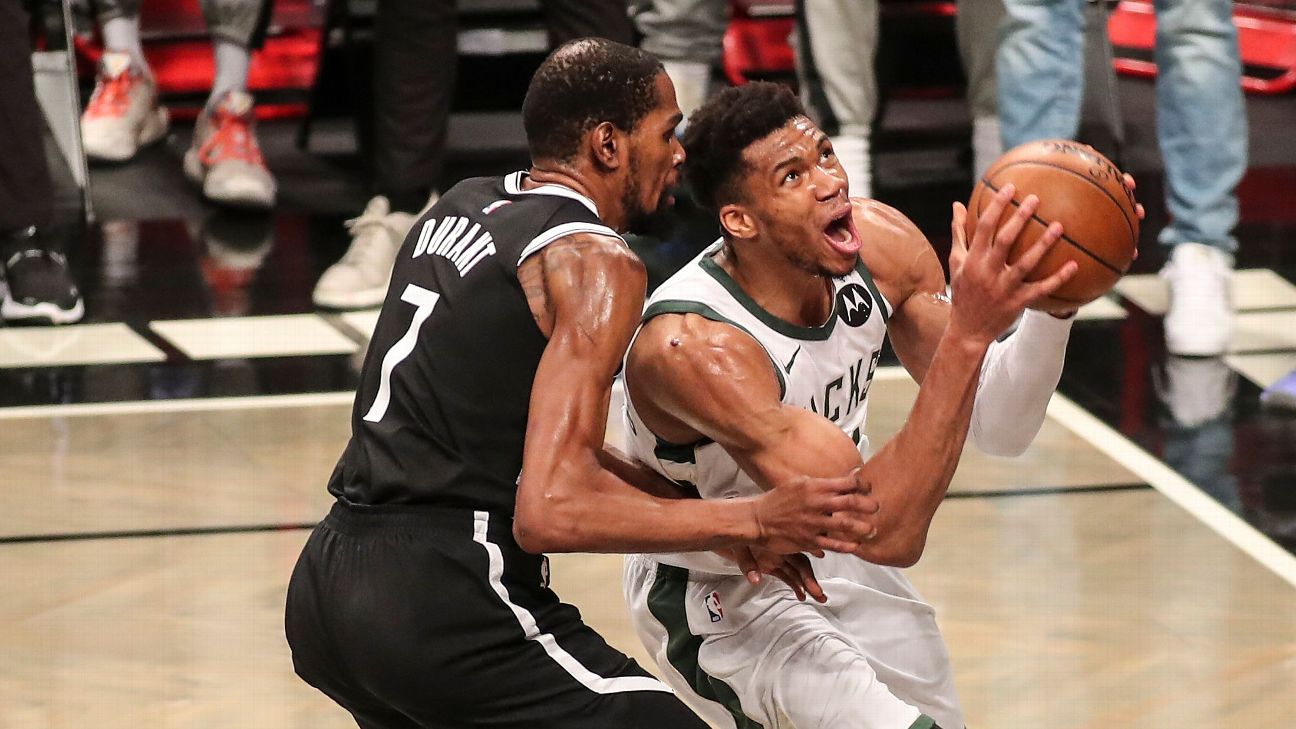 NEW YORK -- When Kevin Durant's unbelievable shot fell through the net with one second left in regulation Saturday night, tying an unforgettable Game 7 between the Brooklyn Nets and Milwaukee Bucksin the Eastern Conference semifinals, it felt like this was destined to be another heartbreaking end to a Bucks season.

Instead, it only briefly delayed their satisfaction. Milwaukee managed to outlast Brooklyn at Barclays Center and won 115-111 in overtime in an instant classic that saw both teams play to the brink of exhaustion.


"That was, like, the longest game ever," Bucks forwardP.J. Tucker said. "It seemed like we were playing for hours. Just like a boxing match [that] just wasn't going to end."

Ultimately, though, it was the Bucks who moved on tothe conference finals, where they will face either the Philadelphia 76ers or theAtlanta Hawks. They overcame Durant's incredible shot -- the ultimate gut punch -- to survive a marathon contest that saw multiple players on both teams hit 50 minutes played, including Durantand James Harden playing all 53 minutes for the Nets.

"We worked extremely hard our whole life for this moment," said Bucks forwardGiannis Antetokounmpo, who finished with 40 points, 13 rebounds and 5 assists. "So we wanted everybody to live up to this moment, to feel this moment, to cherish this moment, because we are built for this.

The Bucks certainly lived up to Antetokounmpo's words Saturday night. The game, like most Game 7s, quickly devolved into a tense, physical affair, with both teams struggling to get consistent offense going outside of their stars, and with those stars playing virtually every minute of the game. The result was a performance that felt more like an endurance contest than a basketball game for all involved.

That was especially true for the game's biggest stars. Durant and Harden never left the game, with Durant setting an NBA record for points in a Game 7 with 48 and Harden finishing with 22 points, nine rebounds and nine assists while playing on what he said afterward was a Grade 2 hamstring strain. Meanwhile, Middleton, who scored 23 points, sat for 39 seconds.

As the night wore on, the weary legs were evident on both sides, with plenty of hands on knees and hips as the game stretched into the fourth quarter. Every player who hit the floor needed a moment to collect himself before slowly climbing to his feet.

But after these two teams each held serve at home in the first six games of this series, the Bucks overcame deficits in both the fourth quarter and overtime to somehow drag themselves into the East finals for a second time in three seasons.


"It's been a heck of a series," Bucks coach Mike Budenholzer said. "You put so much emotion, so much energy and time into it. So for this group to be rewarded with a huge win in a Game 7 in overtime ... you just feel good for the group, feel great for the players."

Milwaukee wasn't feeling great when, after an ugly shot clock violation gave the Nets the ball with six seconds to go and while trailing by two, Durant isolated against his close friend Tucker -- who hounded him all series long -- spun and buried a seemingly impossible shot over near-perfect defense.

Had Durant's foot been a quarter step farther back, it likely would've marked the end of Milwaukee's season. But it wasn't -- meaning that, even after another ugly inbounds play by the Bucks to end regulation sent the game to overtime, they still had life.

It would've been an easy time to fold. And things seemed bleak when the Bucks didn't score for nearly the first four minutes of overtime, missing shot after shot while struggling to contain the offensive glass at the other end.

But unlike Bucks teams of the past, they didn't fold. Instead, Milwaukee dug in its heels and fought, holding the Nets scoreless over the final 4:38 of overtime until the Bucks could finally start making some shots.

They didn't make many. In fact, they made only two -- a post-up by Antetokounmpo with 72 seconds to go, before Middleton hit what proved to be the game-winning jumper with 40.7 seconds to go.

On a night when every ounce of energy was consumed by both sides, however, that proved to be just enough to get the job done.

"We could have finished the game before overtime, and wasn't able to, but we kept our composure."

Since their exit at this stage of the playoffs to the Miami Heat last summer, the Bucks have been building toward this moment -- a Game 7 on the road -- to prove that they had learned from their mistakes. Budenholzer was instructed before the season to focus less on regular-season success, with the goal to have Milwaukee be as prepared for the playoffs as possible. General manager Jon Horst traded for Jrue Holiday before the season and Tucker at the deadline, importing the versatility and toughness the team lacked in its playoff exits in each of the past two seasons.

And, after the disappointments last year against the Heat and the year before in the Eastern Conference finals against the Toronto Raptors, the Bucks showed themselves to be a different team in this series and in Game 7. Antetokounmpo had a dominant performance. Holiday overcame a 2-for-17 start to the game to hit several massive shots down the stretch, plus take over for Tucker on defending Durant at the end of overtime. Middleton shrugged off a similarly slow start to carry the Bucks home.

As a result, their season is still going. But now that they've gotten this far, the Bucks aren't satisfied with simply surviving the Nets. Now, the goal is to get Milwaukee to the NBA finals for the first time in half a century.

"We didn't win the championship. But this is a great step for our organization." 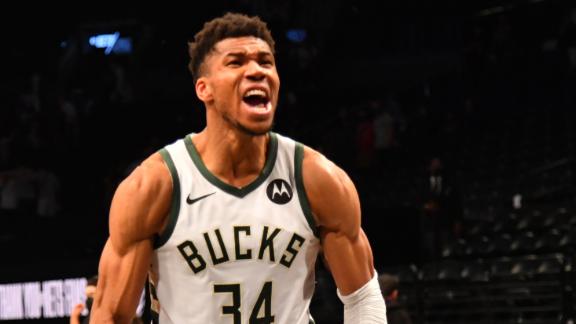