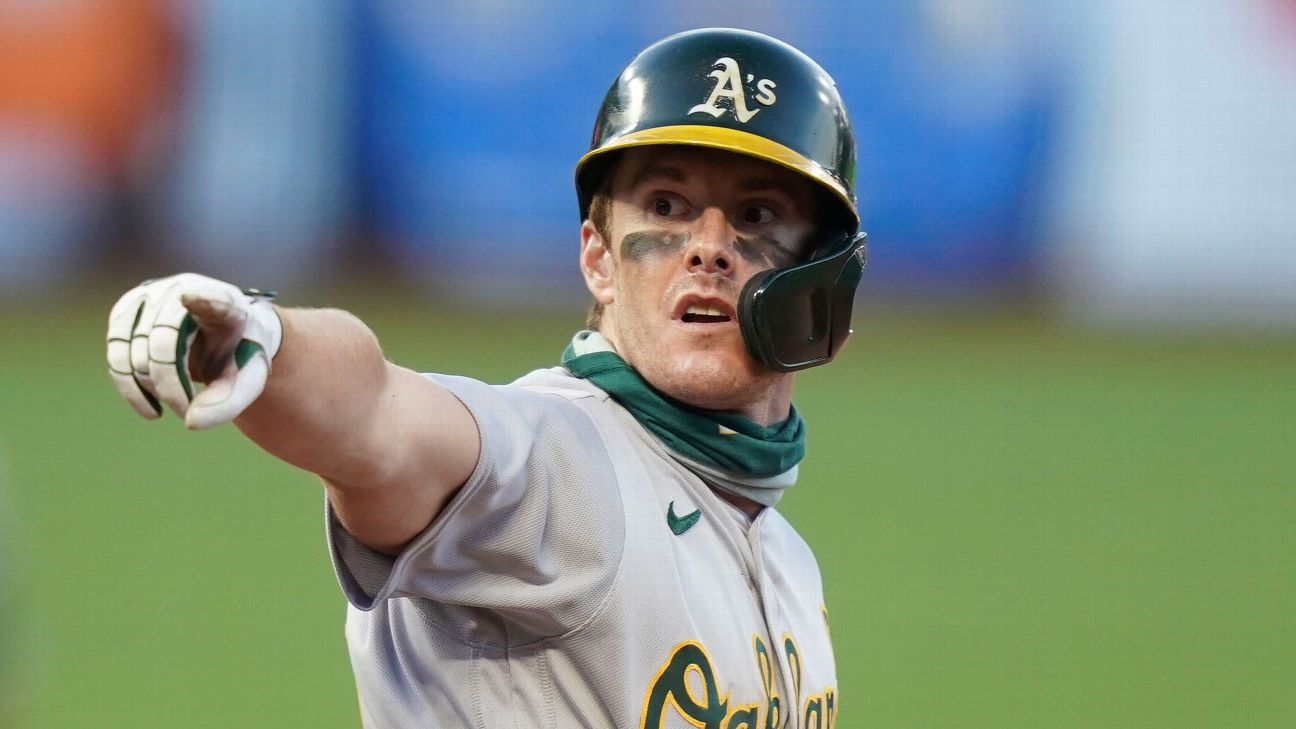 With Major League Baseball teams reaching the midpoint of their seasons and next week's trade deadline looming on the sports calendar, even little more than a month's worth of data is starting to take on meaning for general managers weighing decisions about potential moves they can make. Not least because there's little more than a month of regular-season baseball left to go in 2020's time-crunched campaign.

That limited time to make these judgments also moved our dozen voters in this week's Power Rankings to make some key calls. The Dodgers may still rule the roost as a unanimous No. 1, but the A's and Rays barged past the Yankees to round out a new top three. The Padres bumped the slumping Rockies from our top 10. And watch out for the Cardinals and the Blue Jays, who are both starting to climb as they get more games in.


With the drama starting to mount as the races take shape, national baseball writer David Schoenfield and senior editor Christina Kahrl offered their key stats for every team.

The bullpen has been the huge key so far, ranking second in the majors to the Dodgers with a 2.10 ERA, while ranking first in win probability added and going 9-2. After blowing a save on Opening Day, closer Liam Hendriks is 9-for-9 in saves and has allowed just one run in 13 innings.

With Yonny Chirinos out for the season because of Tommy John surgery, that is now four Rays pitchers out for the year, the others beingColin Poche, Brendan McKay and Andrew Kittredge. The Rays have thrived despite having just one quality start in their first 28 games -- tied with the Pirates for fewest in MLB.

Luke Voit led the American League with a 1.115 OPS entering Sunday (second in the majors behind Bryce Harper), hitting .311/.386/.730. The last Yankees player to lead the AL was Alex Rodriguez in 2007 and the last Yankees first baseman to lead the league was Don Mattingly in 1986.

Which reliever could Cubs land at deadline?

ICYMI:What the Braves could do for deadline deals

Triston McKenzie's dazzling 10-strikeout debut on Saturday -- he was the first pitcher to strike out at least 10 in his first start since Freddy Peralta in 2018 -- was just the latest gem by a Cleveland starter. Cleveland's rotation leads the majors in ERA (2.80), quality starts (19, four more than any other team), strikeouts, strikeout rate and OBP allowed.

It was a historic week for the Padres. They became the first team to hit a grand slam in four consecutive games and then Jake Cronenworth hit one Saturday, giving them five in six games. During that six-game win streak, they hit 17 home runs and scored 51 runs (8.5 per game).

ICYMI:Tatis, Soto breaking the unwritten rules -- and it's great

The Sox entered Sunday tied with the Padres for the MLB lead with 54 home runs. The White Sox were just 25th in the majors in home runs in 2019. In their seven-game win streak entering Sunday, they bashed 27 home runs, including two games with six.

ICYMI:Luis Robert on adapting to life in the big leagues

With Stephen Strasburg out for the season, the Nationals were confronted with the problem of their rotation depth, as just Max Scherzer and Patrick Corbin had thrown a quality start in 2020 before Anibal Sanchez spun his first good turn of the season on Sunday. As muddled as the NL playoff field is, they'll need more of that.

ICYMI:Strasburg to have season-ending surgery

ICYMI:Are Rockies doomed to be also-rans at altitude?

Despite their many moves in the offseason, the 2020 Reds are a lot like the 2019 Reds: good rotation, below-average offense and late-game bullpen issues. The bullpen is 25th in the majors in win probability added, and the lineup entered Sunday hitting just .210. Eugenio Suarez is at .145 and Joey Votto, after homering in the first two games of the season, has hit .186 with one home run since.

The Cardinals have had to piece together their rotation -- using nine different starters in their first 16 games -- but they have a 3.52 ERA and a .195 batting average allowed. There's been some good fortune in there with a .218 BABIP. Getting Jack Flaherty back with no limits will help, as he was limited to 41 pitches in his first start back from the COVID-19 layoff.

Why Cardinals should trade for a starting pitcher

While the Brewers have struggled to break out, the late-game bullpen trio of Josh Hader, Devin Williams and David Phelps had combined for an incredible 45 strikeouts in 27 innings pitched through Saturday while allowing just two earned runs, giving Milwaukee the sort of edge that keeps any game in reach for its slow-starting offense -- and could make the Brewers a fearsome playoff opponent if they make it.

ICYMI:Why the NL East race could go the distance

Teoscar Hernandez hit his 10th home run on Sunday -- when he connects, he hits it hard, ranking in the 99th percentile in average exit velocity and hard-hit rate. The strikeout-to-walk ratio is ugly, so you'd love to see him cut down on that chase rate (34%) and put more balls in play.

Zac Gallen is proving his 2019 rookie season was no fluke, as he has a 2.25 ERA through six starts with 42 K's in 36 innings and has yet to allow more than two runs in a game. The weird thing is that he has no decisions. The Diamondbacks are 4-2 in his starts, however.

ICYMI:Rojas, first Fish to get COVID-19, back in action

The Rangers aren't quite last in batting average on balls in play, but they're among the worst at .262 in part thanks to some bad luck by leading the AL in hard-hit outs with 70. With no Rangers regular outside ofJoey Gallooff to a strong start, Texas needs a teamwide reversal of fortune on contact.

With 10 home runs, Mike Trout is among the MLB leaders. But if L.A. doesn't get turned around soon -- and if Trout wins another MVP award -- he could join Andre Dawson (1987, NL) and Alex Rodriguez (2003, AL) as just the third MVP ever to come from a last-place team. Part of the problem? Angels DHs, first basemen and corner outfielders have combined for MLB worsts in OPS (.593) and wOBA (.256).

If you want a stat that exemplifies this team's improbable run to relevance in the early going, this might be it: Baltimore leads the majors in outs made at home plate with six. After all, if you're the Orioles, why not go for it? What's the worst that could happen? Having snapped last week's losing streak with a pair of weekend wins over the Red Sox, the streaky O's might avoid a fourth straight season in the basement.

The Red Sox have never drafted first overall, but they certainly have a chance to obtain that dubious honor for 2021. Their highest picks came in the first three drafts: fifth in 1965 (Billy Conigliaro), fourth in 1966 (Ken Brett) and third in 1967 (Mike Garman). Since then, their highest pick has been seventh in 1993 (Trot Nixon), 2013 (Trey Ball) and 2015 (Andrew Benintendi).

Trevor Rosenthal is already a much-discussed option for teams looking for bullpen help at the deadline, but he's just one of three 30-something relievers in K.C. with 30-save seasons in their history who are also all free agents at season's end. Rosenthal had seasons with 45 (2014) and 48 saves (2015), Greg Holland notched an NL-best 41 in an All-Star season in 2017 and Ian Kennedy had 30 for the Royals just last year.

George Brett and the magic of chasing .400

An MLB-worst 7.63 ERA from the Tigers' rotation might sound like grim tidings, but it has created an opportunity for the team's much-anticipated changing of the guard as it starts phasing in pitching phenoms such asCasey Mize and Tarik Skubal, both of whom debuted last week.

Kyle Lewis continues to rake -- .373/.463/.569, leading the AL in OBP and hits. He also has drawn 18 walks. In his call-up last September, he had a 33.7% chase rate, but it's down to 20.8%. It's an interesting profile, as his hard-hit rate is actually just in the 23rd percentile and his strikeout rate is below average. Obviously, the .464 BABIP will decline, but the improved approach is a big positive.

The Pirates' season has been ill-starred from the start, but sweeping the Brewers over the weekend reflects their changing fortunes. With Gregory Polanco, Colin Moran, Adam Frazier and Erik Gonzalez all underperforming their expected wOBA by 50 points or more, a teamwide offensive resurgence wouldn't be a surprise. 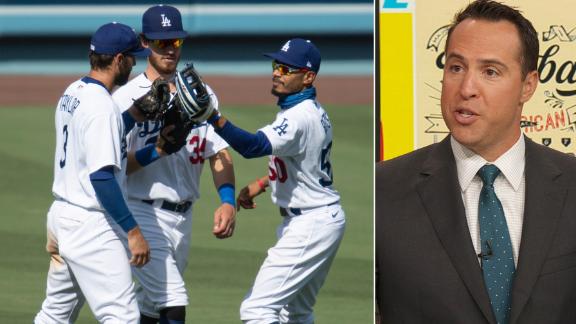 Teixeira: Dodgers are far above the rest of the NL
Mark Teixeira details this week's Power Rankings, looking at the Dodgers' success in the National League and explaining why the AL rounds out the rest of the top five. 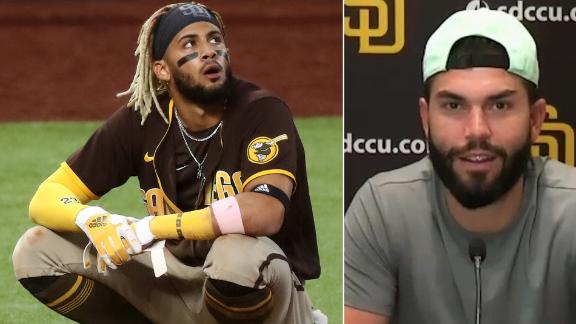 Hosmer: Tatis is a once in a lifetime talent
Eric Hosmer says fans are starting to catch on that Fernando Tatis Jr. is going to be the face of baseball. 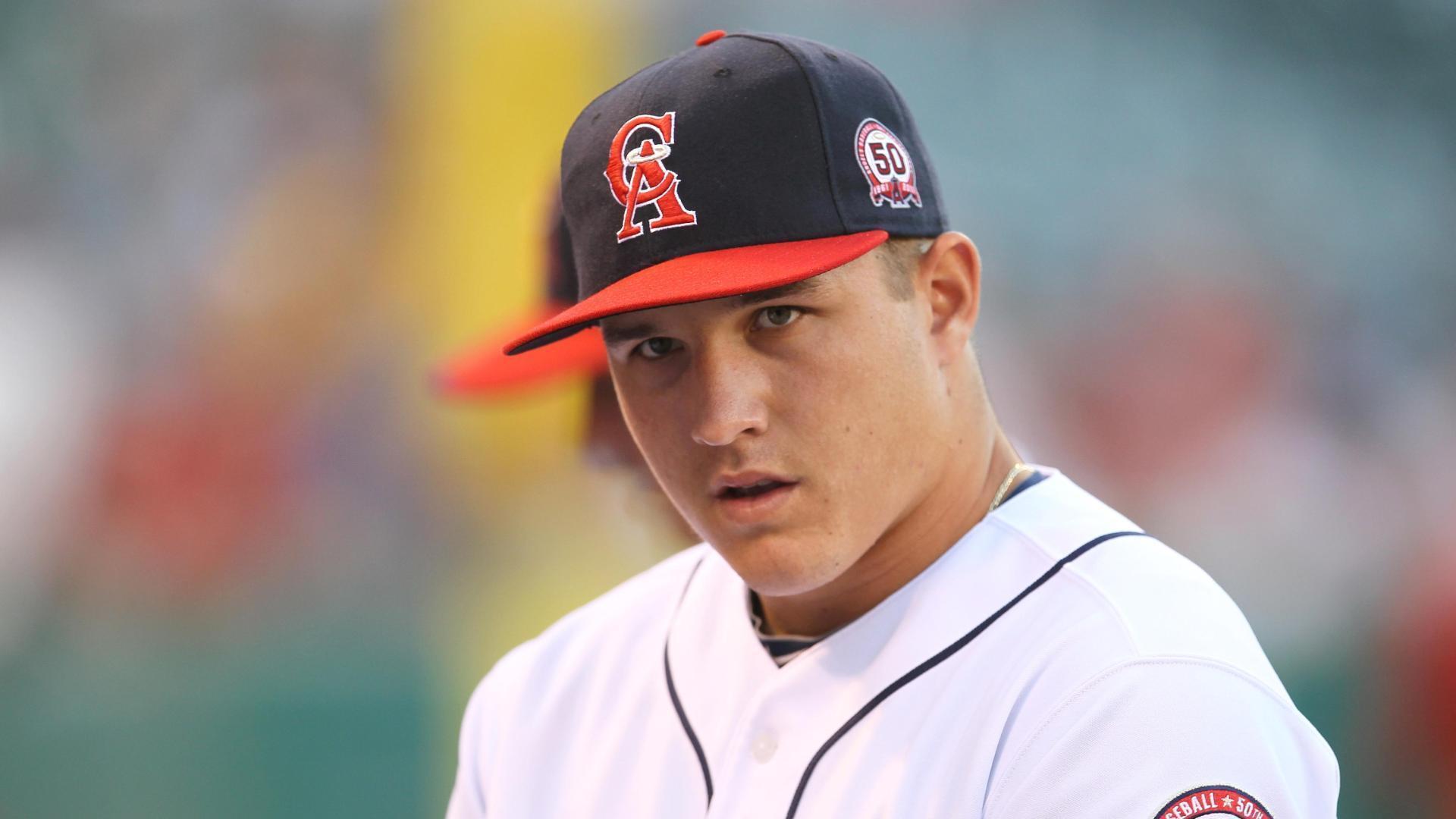