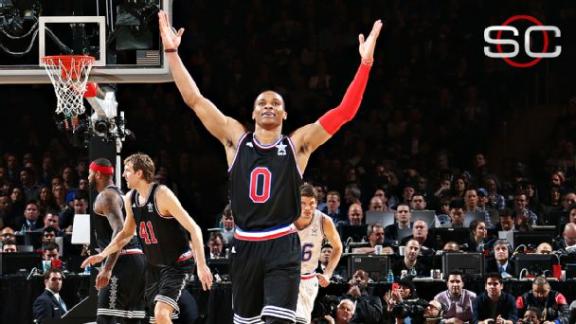 NEW YORK -- Mixing Broadway and basketball, this NBA All-Star Game was a West Side Story.

Russell Westbrook scored 41 points, one shy of the All-Star record, and the Western Conference beat the East 163-158 on Sunday night in the highest-scoring All-Star Game ever.

The Oklahoma City speedster had a record 27 points by halftime and closed out the scoring with two free throws, falling one point shy of Wilt Chamberlain's 42 points in the 1962 game. He was voted the game's MVP at Madison Square Garden.

The NBA's return to New York showed off everything about the Big Apple, and by the time Frank Sinatra's "New York, New York" played after the game, it was clear Westbrook was king of the hill.

"It's amazing. It's a blessing to be here in New York City," Westbrook said during the MVP ceremony.

James Harden added 29 points, eight rebounds and eight assists for the West, which built a 20-point lead in the first half and then pulled away after it was tied at 148 with a little more than four minutes remaining.

The combined 321 points surpassed the 318 scored last season, and the 48 3-pointers smashed last year's record of 30.

LeBron James finished with 30 points but couldn't lead the East to the victory in his favorite NBA arena.

"Don't get no better, man. You play in the Garden in front of these fans," James said.

Harden's 3-pointer snapped the final tie with 4:02 to play and Chris Paul followed with consecutive baskets. Westbrook's fifth 3-pointer put it away at 158-149 with 2:22 to go.

"We just talk about having fun all game long, and then, at a certain point in the fourth quarter, it's time to win," Paul said.

Atlanta's Kyle Korver made seven 3-pointers and scored 21 points for the East, whileWashington's John Wall had 19.

But right from the start, the players were sharing the stage.

Christina Aguilera appeared from behind a giant big apple and belted out some New York-inspired numbers to start the show, joined by the Rockettes.

Entertainment's elite were all over the arena, with players hobnobbing with Jay Z and Floyd Mayweather near their courtside seats at halftime. But the biggest roar came for a star from another sport -- politics.

President Bill Clinton, who had a big night of his own at Madison Square Garden when he was nominated here during the 1992 Democratic National Convention, got a pair of loud ovations when he was shown during Queen Latifah's performance of the national anthem.

Players were quizzed during comedic skits on New York talk and terms, and fuhgeddaboudit, Pau Gasol had no idea what a stoop was. (Stephen Curry knew it was a porch in the front of a building).

Pau won the jump ball against little brotherMarcto begin the first All-Star Game featuring two sibling starters, but for a while it looked as if that wouldbe the East's only win of the night.

The West shot out to a 20-point lead, but the East chipped away and cut it to 83-82 before pop star Ariana Grande's halftime performance.

It was New York's first time hosting the weekend since 1998 and a rare journey to the north for the NBA, which has preferred to stage the festivities in the warmth of the South and West.

Even some of the NBA's most fashionable had to choose bundling up over dressing up, a concession to the frigid temperatures they faced during the weekend. But next year might be worse, when the game heads north of the border to Toronto.

Carmelo Anthony struggled to 14 points on 6-of-20 shooting for the East in what may have been his final game of the season. TheKnicksstar has beenbattling a sore knee for much of the season and may opt for surgery with the team owning the NBA's worst record.

But even the Knicks' misery couldn't dampen the spirits for this basketball-rich city. Players on the floor were surrounded by some of New York's hoops royalty, such as Kareem Abdul-Jabbar and Julius Erving. There was even time to celebrate the Knicks: Willis Reed, Walt Frazier, Bill Bradley, Phil Jackson, Earl Monroe and Bernard King were honored during a break in the action.

Tim Duncan had one basket in his 15th All-Star Game, second only to Abdul-Jabbar's 18. Duncan's first was here in 1998, as was Kobe Bryant's.

Bryant had to sit out along with Anthony Davis and Blake Griffin, leaving the West without three elected starters. But they had more than enough talent left, not surprising in another season where the West is the more powerful conference from top to bottom.

"I thought we would all be out there together quite a bit. We were kind of hand signaling to run a few plays, but you weren't really running plays," Korver said. "It was just up and down. But it was great for the Hawks and for the city of Atlanta. It was really cool."

Westbrook Leads West To Win
SportsCenter Highlight of the Night: Russell Westbrook had 41 points and was MVP as the West took a 163-158 All-Star Game win.

Westbrook Talks MVP Win
Russell Westbrook comments on winning the NBA All-Star Game MVP and how he approached playing in the game.

NBA Top 3 Plays Of The Night
Check out the top plays from the 2015 NBA All-Star Game, including dunks by Russell Westbrook and LeBron James.

Westbrook Leads West To Win
SportsCenter Highlight of the Night: Russell Westbrook had 41 points and was MVP as the West took a 163-158 win in the All-Star Game.

Westbrook Talks MVP Win
Russell Westbrook comments on winning the NBA All-Star Game MVP and how he approached playing in the game.