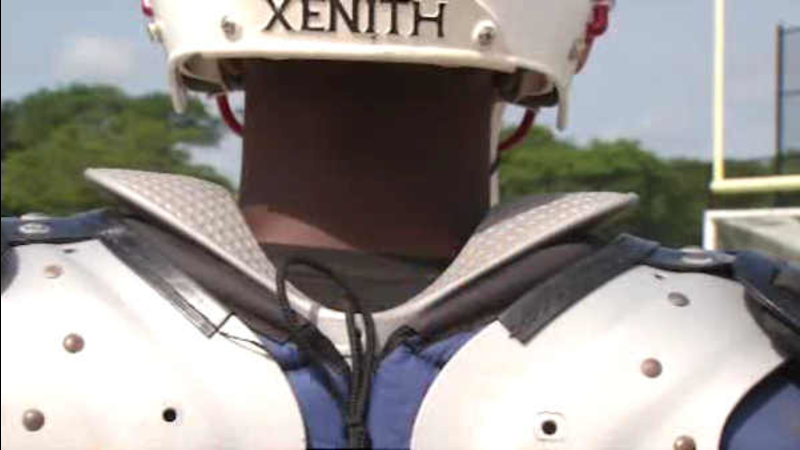 FLORAK PARK, Long Island (WABC) -- A new device will soon be available to high school football players that could potentially protect them from head and neck injuries.

It comes as young players suffering from concussions continues to be a big concern.

It has been a big debate in recent years, as more and more high school football players have suffered life-threatening injuries out on the field.

More and more parents are pulling their children out of the game entirely. "They're very reluctant," said Michael Spina of the Long Island Youth Football Academy. "I've seen all the numbers in the youth programs have dropped."

Spina is hoping programs like his help turn the trend around. And Dr. Patrick Kerr, visiting the camp Wednesday, is a big part of that.

"And we wannt to reduce the amount of force that's going to these kids' neck," said Kerr, a Manhattan chiropractor who's been researching head and neck injuries for years.

Over the past eight years, he developed something called the Kerr "collar", tested by bio mechanics and he says proven to reduce 58 percent of force to the neck.

Also reducing what he calls traumatic movement of the head.

"And we turn these parts into a system, that can work with the helmet, rather than the helmet controlling everything," said Dr. Kerr.

Already, the NFL is using the device. The Miami Dolphins have 18, and ordered 12 more. College teams also using them, like Virginia Tech, LSU, and Alabama.

But it's the high school players, who, arguably - need more protection.

It's why Spina, who's also head coach at Floral Park High School, wants his players to try the collar next season.

"And hopefully we will get approval, and we will put 'em on the kids, if we get the full approval," said Spina.