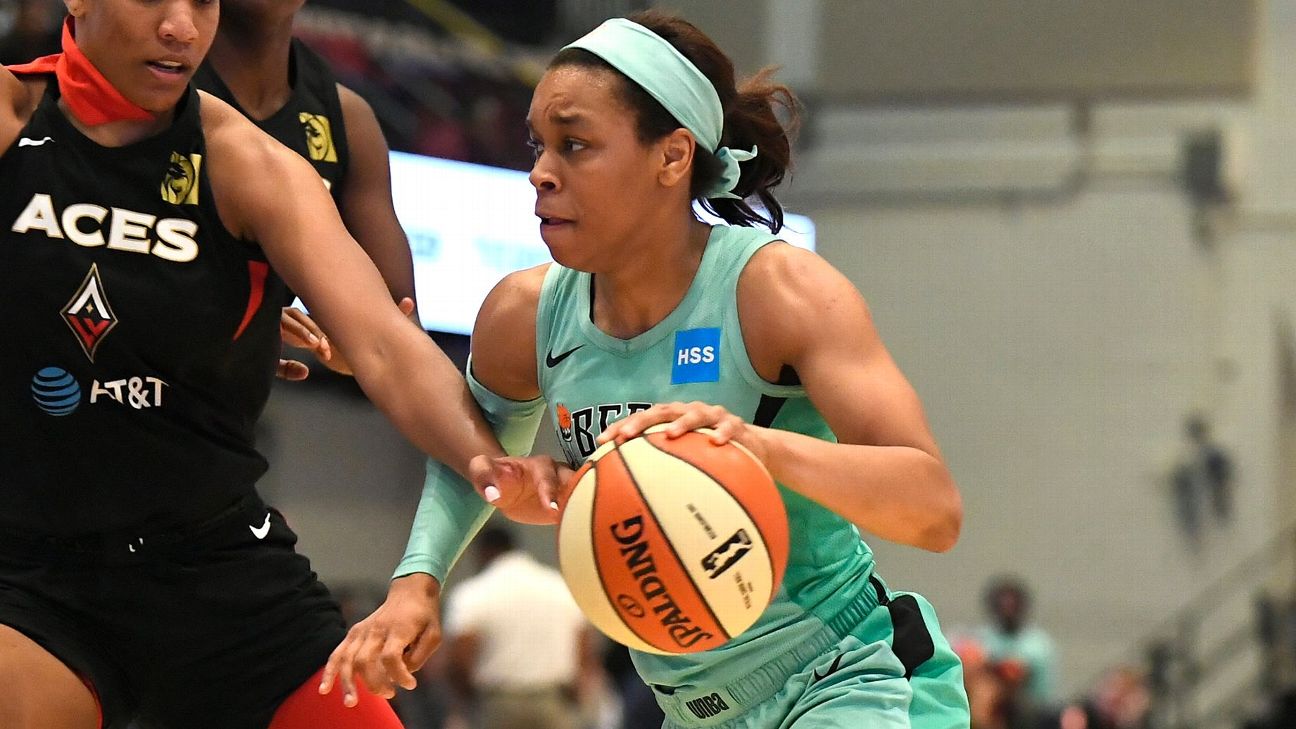 New York Liberty guard Asia Durr said she still is feeling the effects of COVID-19 nearly eight months after her diagnosis, but hopes to play in the 2021 WNBA season. At this point, she said she would be happy to be able to shoot some free throws.

"It's been so unpredictable -- one day, I feel better. The next, I feel terrible," Durr told ESPN on Wednesday. "It's just so much about this is unknown. We're still trying to learn. But I'm doing everything I can. I'm a fighter; I'm not going to quit.


"I can hold a basketball. But I want to dribble. I want to shoot. I want to be a basketball player now, but my body just says no. You feel the sickness in your stomach. You have heart palpitation, you feel like you're going to faint."

Durr, 23, appeared on HBO's "Real Sports" on Tuesday in a feature about so-called "long-haulers" -- individuals whose COVID-19 symptoms linger indefinitely. Even though she has been testing negative for the virus, Durr still deals with many ailments, including fatigue, headaches and a feeling of "fog" when it comes to concentration and memory.

"It's not every single day where I'll have constant stabbing pains in my lungs like I did," Durr said. "But I do still feel that way if I take a deep breath and sometimes even when I'm just sitting still. I deal with nausea still, and stomach pain. Sometimes it's still hard to eat.

"Headache and confusion are things I deal with every single day. Brain fog. I was just watching the episode last night with my family. And after it went off, I was like, 'Wait, what did I say?' I had just watched it.

"It's frustrating to not always be able to hold onto a conversation you have had. I've found myself trying to focus so hard on what's being said, and then I have what they call COVID headaches."

Durr, an All-American who led Louisville to the 2018 Women's Final Four, was the No. 2 overall draft pick by the Liberty in 2019. She averaged 9.7 points her rookie season, but was limited to 18 games because of a hip injury for which she needed offseason surgery. She was expected back at full strength for 2020, but was diagnosed with COVID-19 in June.

Several other WNBA players dealt with the illness, too. Some, like Durr, received medical exemptions for the 2020 season and received their salary. Others were able to recover and play in the bubble in Bradenton, Florida.


Durr, who is from Douglasville, Georgia, has been living in Atlanta and for several months couldn't see her family. She can now because she has been testing negative, but they take precautions.

She keeps in touch with the Liberty and hears from other WNBA players. But at times last year, her only communication with her team and her family was through texts because she found speaking too taxing since it caused shortness of breath and exhausted her.

"So many people have reached out and I'm beyond grateful for that," Durr said, thanking her family, friends, teammates, health care professionals, the Liberty and their fans, the women's basketball community and the Louisville faithful.

Yet the emotional toll is costly. Being isolated, feeling bad physically and not knowing when things might get better has been Durr's life since last summer. She dropped as much as 32 pounds, gained some of it back, but then lost most of that. She has been to the hospital multiple times, though she hasn't stayed overnight.

In August, Durr said she thought she was starting to turn a corner, as she felt a little better. But the symptoms returned in force in September. Since then, she has had good days and bad, but still isn't feeling anything like herself. She misses not just basketball, but any sense of normalcy.

After she was diagnosed, the Liberty assembled a medical team to help with Durr's recovery. She does physical therapy at least three times a day, she said, even if that is just breathing exercises.


"She's been really diligent, working with the medical team," Liberty general manager Jonathan Kolb told ESPN. "Our first priority is helping her just be healthy. After that, we can focus on the basketball side of things.

"Asia is one of the most incredible human beings I've had the privilege to know. And I feel like a big part of her identity is basketball, for a good reason. She's really good at it and has put her life into it. The hardest part is seeing somebody lose part of their identity through no fault of their own."

Durr said she is hopeful of returning to that identity. But the road ahead is long, with no finish line in sight right now.

"I'm striving to do everything I can to get back out there on the court for the 2021 season," Durr said. "I'm so used to if you get hurt playing basketball, they say, 'You'll be out for two weeks or two months, or whatever.' This is, 'We don't know.' Everybody's body is different. That's something I've never heard before. I've been hurt a few times in my career, and I've always been put on a timetable. This is all new."

Kolb said he doesn't have clarity yet from the WNBA on whether medical exemptions with salary will still be in effect for players in the 2021 season. He knows Durr hopes to play and said the Liberty are committed to her well-being.