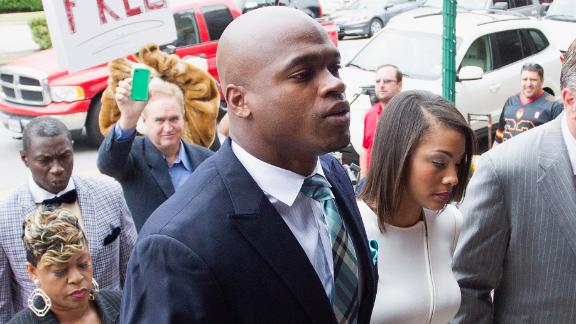 EDEN PRAIRIE, Minn. -- The NFL Players Association has filed an expedited grievance with the NFL to reinstate Minnesota Vikings running back Adrian Peterson.

The NFLPA cited Monday "explicit language in a signed agreement" from Sept. 18, when Peterson was placed on a special commissioner's exempt list after his indictment on felony child abuse in Texas. Peterson pleaded no contest Tuesday to a lesser charge of misdemeanor reckless assault, freeing him from the court system provided he fulfills the terms of his probation.

Under the collective bargaining agreement,a hearing must be held on the expedited grievance within seven days, after which an independent arbiter will render a decision within five days from that date.

The league began a review Thursday of the case under the personal conduct policy, but it said Peterson would remain on paid leave until the process is completed.

That didn't sit well with the union.

The NFLPA demanded in a letter to the NFL last week that Peterson be allowed to rejoin the Vikings immediately until a determination of any discipline.

"As of now, they have failed to respond or comply," the NFLPA said. "It is our obligation to protect all players' rights, and we will pursue any and all breaches of any contract between a player and his team or the NFL."

The league responded to the grievance Monday night.

"We have received the NFLPA's grievance on behalf of Adrian Peterson," the NFL said in a statement. "We have honored our commitment to Mr. Peterson and the NFLPA not to process or impose any discipline until the criminal charges pending in Texas were resolved. When Mr. Peterson decided not to contest criminal charges, we promptly advised both him and the NFLPA that we were prepared to consider what, if any, discipline should now be imposed under the personal conduct policy.

"We asked Mr. Peterson and his representatives, including the NFLPA, for relevant information. We have not received any of the requested information, but remain prepared to schedule a hearing and make a determination as quickly as possible based on as much information as available."

The Vikings come off their bye week still waiting for the NFL to act but are hardly pinning any plans on a possible Peterson return.

"We'd just prepare like he's not going to be here until we hear differently," coach Mike Zimmer said.

The Vikings offered no hints Monday as to what their plan would be if Peterson is reinstated by the league. They play at Chicago on Sunday and in a 48-word statement said their focus is on preparing for the Bears.

"As an organization, we respect and understand the league's process," the Vikings said.

The league has offered Peterson a hearing before issuing any punishment. It also requested he submit relevant information regarding his case and meet with designated experts who will make recommendations for discipline to commissioner Roger Goodell.

Goodell announced in August a stiffer penalty for players involved with domestic violence. The guideline now calls for a six-game suspension for a first offense, although the injuries Peterson acknowledged causing his 4-year-old son occurred in May. Peterson has said he didn't mean harm in hitting the boy with a wooden switch. He said he was applying the same type of corporal punishment he received as a child.

Zimmer said the league has not given the Vikings a timetable for a conclusion.

"When those decisions are made, then we can make decisions," he said. "Until then, really, our hands are tied."

Coaches and players have said they would welcome Peterson back. There was no concern expressed about a distraction, either during the wait or after a potential return.

"More than the distractions that we've had this season? No. This team has been pretty resilient," Zimmer said.

Said wide receiver Greg Jennings: "We focus on the Bears and let everyone who's dealing with the whole Adrian situation deal with that. I'll continue to pray for him and his family and things like that, but we have to focus on what we can control."

Information from ESPN NFL Insider Ed Werder, ESPN.com's Dan Graziano and Ben Goessling and The Associated Press is included in this report.