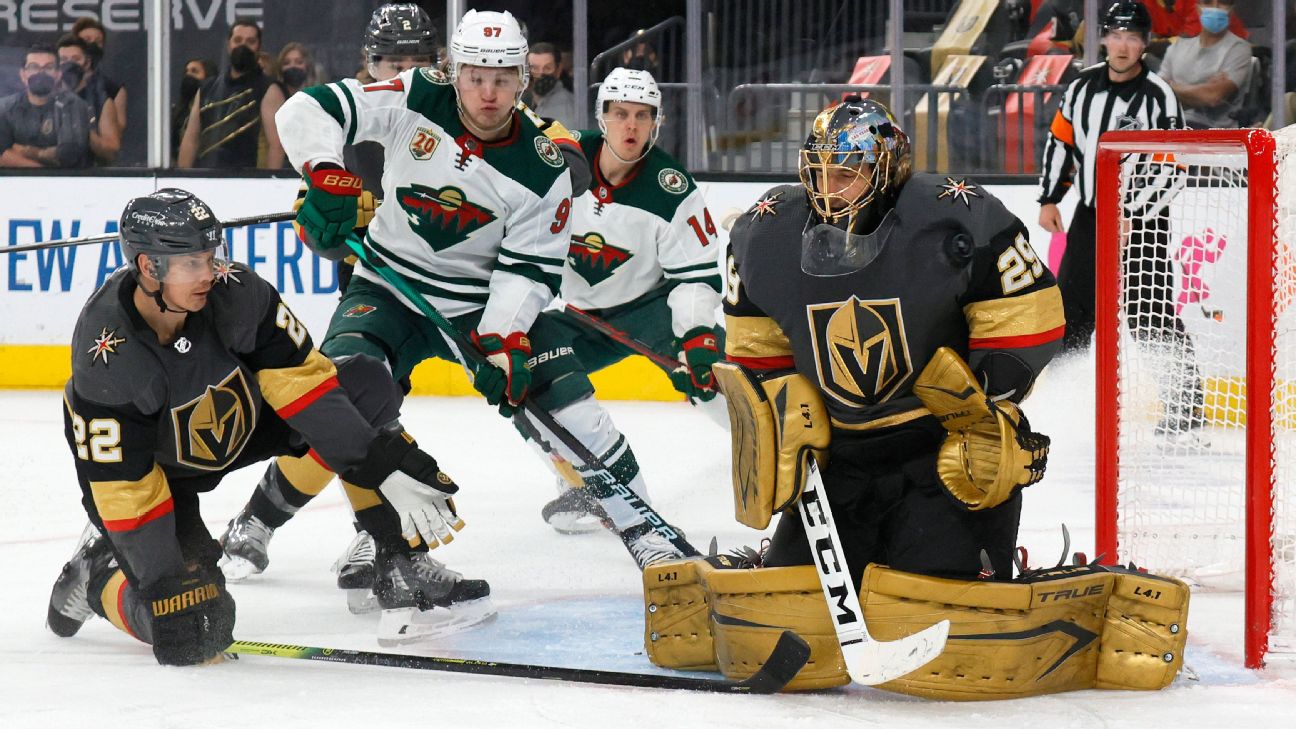 After the Carolina Hurricanes punched their ticket for the second round on Thursday with a thrilling overtime win over the Nashville Predators, either the Minnesota Wild or Vegas Golden Knights will join them on Friday night, as they play the first Game 7 of the 2021 Stanley Cup playoffs.

The Wild have won two straight games, outscoring the Golden Knights 7-2 to force a Game 7. Is that going to be enough to chase Marc-Andre Fleury from the Vegas crease in favor of Robin Lehner, who hasn't appeared since May 10? Coach Pete DeBoer, who is 5-0 in Game 7s, isn't tipping his hand. The Wild have won two playoff games at T-Mobile Arena, and they were 2-1-1 there in the regular season. Home teams own a 105-76 (.580) advantage overall in Game 7. The first goal will be critical: The team that strikes first is 135-46 (.746) in the 181 Game 7s in the Stanley Cup playoffs.

Max Pacioretty is a game-time decision for the Knights, while Peyton Krebs, Brayden McNabb and Ryan Reaves were all on the NHL's COVID-related absences list on Thursday.

Closing out a series is difficult. The Maple Leafs found that out the hard way in Game 5, as the Canadiens needed just 59 seconds of overtime (and one disastrous turnover) to extend the series. Montreal took a 2-0 lead on a pair of Joel Armia goals in the first period. Jesperi Kotkaniemi made it 3-0 at 4:52 of the second period on a turnover by Leafs defenseman Rasmus Sandin, one of the defenseman's two flubs that led to Montreal goals. But the biggest gift from the Leafs would come in overtime, as Alex Galchenyuk passed the puck to Montreal's Cole Caufield, springing the rookie on a 2-on-0 breakaway with Nick Suzuki, who converted for the game winner. Full recap


The Hurricanes and Predators battled in a thrilling Game 6, but Carolina finally put away the pesky Preds in Nashville. Sebastian Aho scored his second goal of the game at 1:06 of overtime, redirecting a shot from defenseman Jaccob Slavin. Dougie Hamilton's goal at 13:59 of the third period, on a Slavin feed, completed a two-goal rally for the Hurricanes. Aho, Hamilton, Brock McGinn and Slavin all had two-point games for Carolina, who advances to take on the Tampa Bay Lightning for the Central Division title. Full recap

The Hurricanes are 3-0 with Slavin the lineup, and he went above and beyond his usual defensive effectiveness in Game 6. Slavin's perfect pass gave Dougie Hamilton a layup at 13:59 of the third period to tie the score. His shot got through in overtime, allowing Sebastian Aho to tip it home for the game winner just 1:06 into the extra session for the win. "In overtime, you're just trying to throw pucks to the net and anything can happen. That's huge. On to the next series," Slavin said.

The Canadiens' biggest issue this series has been offense. After winning Game 1 against the Leafs, they managed just two goals over the next three games. Armia's two in the first period didn't end up being game-winning goals, as the teams needed overtime to settle Game 5. But they set the tone and bolstered the Habs' confidence, which was essential to their victory.

Saros made 27 saves in Game 6, many of them with a high degree of difficulty, before getting beaten on the tip-shot game winner. He carried the Predators to the playoffs, and finished postseason with a .921 save percentage. "He kinda drove the bus for us the last couple of months. He deserves all the credit that comes his way," defenseman Ryan Ellissaid.

Gaffe of the day

Alex Galchenyuk has had many shining moments in his resurgent stint with the Maple Leafs. This was not one of them. Galchenyuk passed the puck directly to Cole Caufield, who sprinted out to an unforgivable 2-on-0 breakaway, ending the game 59 seconds into overtime. "I think it's like any other mistake that you make. You want the player to be aware of the mistake, and then you park it and move on. Hockey is a game of mistakes," Toronto coach Sheldon Keefesaid.

Absence of the day

Roman Josi didn't return to Game 6 after taking this hit from Jordan Martinook early in the third period. Coach John Hynes did not have an update on his status.

Special guest of the day

After lightly skating for about 18 minutes in the morning, injured Leafs captain John Tavares was a spectator for Game 5 vs. Montreal.

"We're going to win a game. We haven't had some fans in a while, so it'll be exciting. But it's another opportunity for us to obviously close out this series."

-- Toronto Maple Leafs star Auston Matthews, when asked about playing Game 6 in front of a small capacity of fans in Montreal.

Stapp of the day

Scott Stapp, the former Creed lead singer, played Game 6 in Nashville. He did not take the Predators higher.

The Hurricanes had this to say:

What's this life for, if not for internet trolling? 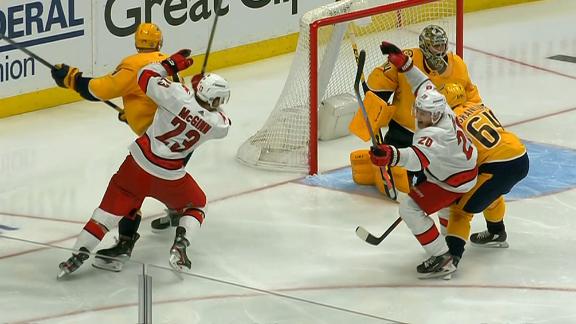 Sebastian Aho's quick OT goal sends Hurricanes to next round
Jaccob Slavin shoots off a faceoff, and Sebastian Aho gets a piece of the shot to win it for Carolina and knock off Nashville in the series. 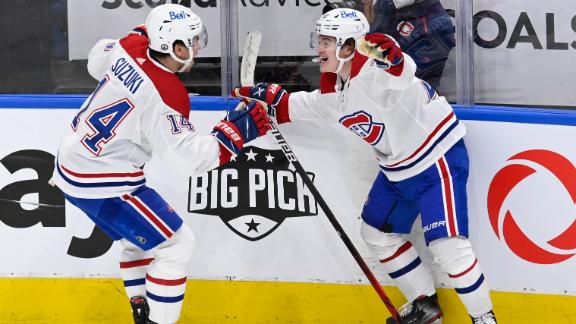