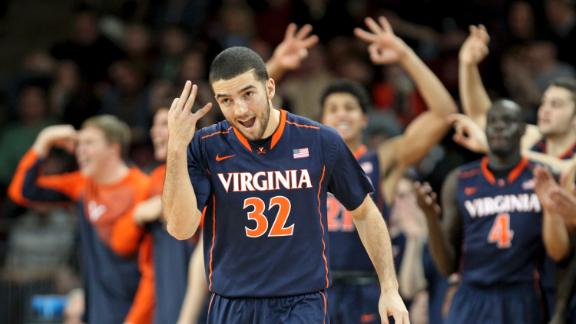 BOSTON --Virginia's players knew it was their time to show their signature defensive style of play.

Malcolm Brogdon scored 20 points, Anthony Gill had 11 points and 10 rebounds and the No. 2 Cavaliers pulled away in the second half for a 66-51 victory overBoston Collegeon Saturday.

Virginia was down by five points with a near capacity crowd roaring after Boston College's Olivier Hanlan pounded the floor, imploring his Eagles teammates to play tougher defense. But the Cavaliers were the ones who turned the game around with their best-in-the-nation defense (50.6 points allowed).

"You feel it. You definitely feel it," Virginia guard Justin Anderson said. "You look in coach's eyes, he's so passionate. Guys like Malcolm and London (Perrantes) look back when they're guarding the ball and say, Let's go guys. Let's get a stop.' You just see it in each other's eyes."

"We don't knock people out," Virginia coach Tony Bennett said. "We're not a knockout team. It's knowing you're going to have to stay in there and hang in there against their stuff."

Trailing 38-33 early in the second half, the Cavaliers tightened up the defense and answered by scoring the next 10 points. Isaiah Wilkins hit a pair of jumpers from the right wing during the stretch.

Hanlan had just pounded on the floor to rouse the home crowd before Wilkins made his first jumper, triggering the run.

"I feel like every individual player knows that we're about to turn it up," Gill said. "We're just waiting for that one moment where we say All right, let's go for it as a team collectively. Let's do this. Let's get it going and let's win this game."

"We struggled. We've got to get some other guys going," Boston College coach Jim Christian said. "We had a lot of point-blank shots. I mean, if you're going to beat the No. 2 team in the country -- an unbelievable defensive team -- when you get there and you get angles, you've got to finish those shots."

Virginia has won its first five ACC games for the first time since 1980-81.

After Virginia's 10-0 run, the teams traded points before Justin Anderson's three free throws made it 49-42 with just under seven minutes to play. It was the first time either team led by more than two possessions.

London Perrantes' consecutive baskets -- the first a 3-pointer from the wing -- gave them a comfortable 58-48 lead with just over four minutes left.

Virginia coasted the rest of the way.

"We knew coming into the game that Virginia is a very good basketball team and how they play physically on defense," Hanlan said.

Boston College had opened the second half by outscoring Virginia 14-6, turning a three-point deficit to a 38-33 lead on Hanlan's driving basket in the lane. Heckmann scored nine of the points in the spree, hitting a 3 and driving past defenders on each of the other three baskets.

Neither team held more than a one-possession lead in a tightly defended opening half. The teams went up and down the floor, playing right past the first and second TV time-outs until a whistle with just over 11 minutes to play.

The Cavaliers used their size to grab a handful of offensive rebounds late in the half, but BC stayed close thanks to a couple of timely 3-pointers.

Virginia: It was the 17th time this season the Cavaliers held an opponent without a point for five or more minutes. ... Virginia was just 1-4 on the road against BC before the victory.

Twice BC's 6-foot-11 forward Will Magarity entered in the first half and nailed a 3-pointer the first time he touched the ball.

The teams went over 6 minutes without a whistle, from just under 18 minutes to the next stoppage with 11:06 to play in the opening half.

Boston College: At Syracuse on Tuesday.

Virginia Beats Boston College On The Road
Jay Williams and Seth Greenberg break down No. 2 Virginia's 66-51 win over Boston College, improving its record to 17-0 on the season.