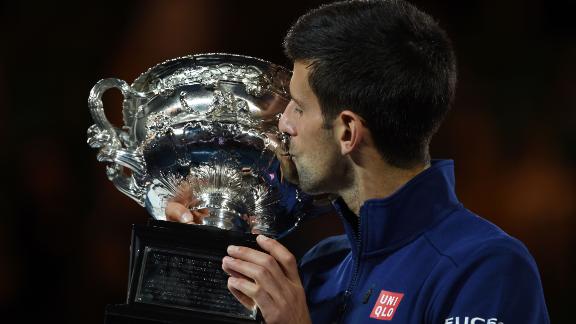 MELBOURNE, Australia -- The pantheon of tennis' all-time greats is getting awfully crowded at the top.

With a 6-1, 7-5, 7-6 (3) win over No. 2 Andy Murray on Sunday, No. 1Novak Djokovic captured his record sixth Australian Open title and tied legends Rod Laver and Bjorn Borg with his 11th Grand Slam title.

For more than a year, Djokovic has taken the game to an extraordinary new level. He has now seized three consecutive major titles for the second time in his career.

Impressively, Djokovic is doing this in an era that still features Roger Federer and Rafael Nadal.

"Every Grand Slam title is very significant in its own way," Djokovic said. "Here, because of the fact that I managed to make history tonight and equal Roy Emerson's six Australian Open titles. Very honored to be mentioned alongside legends of our sport by Bjorn Borg, Rod Laver, win as many Grand Slams as they did.

"I can't lie and say I didn't think about it. Of course it was in back of my mind. Coming into the court, I knew that I have a chance to make the history. Of course it served as a great motivation, as a great imperative to play my best."

A year after going 82-6 with 11 titles -- a season that was thrust into the conversation of the greatest ever -- Djokovic is off to another sterling start.

But the manner in which he beat his final two opponents in Melbourne truly speaks to Djokovic's stranglehold on the game. Despite a valiant effort from Federer in the semifinal, Djokovic lost only one set in his final two matches -- this against the next two best players in the world.

"I don't want to allow myself to be in that frame of mind," Djokovic said. "Because if I do, the person becomes too arrogant and thinks that he's a higher being or better than everybody else. You can get a big slap from karma very soon. I don't want that.

"I try to, you know, still follow the same kind of lifestyle and routine, you know, things that I've been doing all these years that have been helping me to get to where I am."

Djokovic believes time away from the frenetic life that comes with chasing a Grand Slam title has kept him focused. On Friday, he visited the botanical gardens on the south bank of the Yarra River to mentally reset.

His path through the draw came with some difficulties. In the fourth round, Djokovic committed an astonishing 100 unforced errors against Gilles Simon. Out of sorts, Djokovic failed to capitalize on one drop shot after another. Against Kei Nishikori a round later, he remained off form despite prevailing in straight sets.

It wasn't until his semifinal encounter against Federer that Djokovic cleaned up his game, a win he attributed to his self-belief and intensity.

"It's actually many years of obviously commitment, hard work, sacrifice and dedication, not just to training sessions, the things that you are obliged to do as a tennis player, but also to a lifestyle," Djokovic said. "Trying to devote most of your time, energy, thought to make yourself the best person and the best player possible."

That level carried over against Murray, now a five-time Australian Open runner-up.

Djokovic won almost 60 percent of his second-serve points, compared to Murray's 35 percent, and was broken only twice. It didn't help Murray that he committed 65 unforced errors, 24 more than the Serb.

The opening set got away in a hurry. After 16 minutes, Murray was already down two breaks. Fourteen minutes later, it was over.

But Murray, who was awake until 1:30 a.m. watching his brother win the men's doubles title, began to show a fighting spirit in the second set. In the opening game, he won a draining 28-shot rally and exulted loudly. At 1-1, he withstood an 11-minute service game. For the first time, it looked like a match worthy of a Grand Slam final.

After a quick exchange of breaks later in the set, Murray hung on to an ultra-tense 14-point game to take the lead at 5-4 when Djokovic dumped a backhand into the net.

The turning point came a game later, when Murray dropped a 40-love lead. The game featured a 36-point rally, the longest of the match, that appeared to wipe out the Scot. Djokovic won the next game to take a commanding two-set lead.

Murray, enraged at himself for not capitalizing on a key moment, smashed his racket into the court.

In the third set, Djokovic finally showed some nerves. Up a break after the first game, he was broken soon after. The frame went into a tiebreaker, where he seized control immediately.

An ace down the middle on the third match point clinched his latest title. Djokovic clenched his fist, walked over to his entourage for a few hugs and then went back to his chair, a relatively subdued reaction from a player who has owned this tournament for more than a half-decade.

"He definitely made me work," Djokovic said. "There were a lot of long rallies, long exchanges. We were both breathing heavily towards the end of the second and the third set. But that's what you expect.

"As I was saying, I knew coming into the match against Andy I'm going to have to be patient and construct the point. Obviously trying to be the one to take the first initiative and be more aggressive."

Much like Serena WilliamsversusMaria Sharapova, this appears to be the next great nonrivalry in tennis. Murray has unseated the world No. 1 just once since the Scot's historic 2013 Wimbledon championship.

The lopsided history aside, Murray was marred by distractions throughout the two weeks in Melbourne Park. First, he vowed to leave the tournament at any time if his wife, Kim Sears, who is eight months pregnant, went into labor. Then last week, Nigel Sears, his father-in-law and coach of Ana Ivanovic, collapsed at Rod Laver Arena.

"Regardless of today's result, it's been hard," Murray said. "Had I lost in the third or fourth round, it still would have been difficult with everything that's happened. [My wife] has been amazing. Handled everything unbelievably well. Yeah, I have to thank her for allowing me to play and sort of stay here with everything that was going on."

As much as the Scot attempted to calibrate his focus on his game, he said he felt emotionally drained in a three-set win against Bernard Tomic in the fourth round.

"A lot's been going on," Murray said. "You know, I started the last couple of matches quite slowly, I think, understandable in some respects. Obviously, you know, it's not good to begin matches like that against someone like Novak.

"But I'm proud of the way I fought and managed to get myself back into the match and create chances for myself."

For Djokovic, the next question becomes whether he can complete his career Slam at the French Open in May.

"I can't allow myself to relax and enjoy," Djokovic said. "Of course I want to enjoy, and I will, but it's not going to go more than few days. After that I already thinking about how can I continue on playing well throughout the rest of the season each tournament." 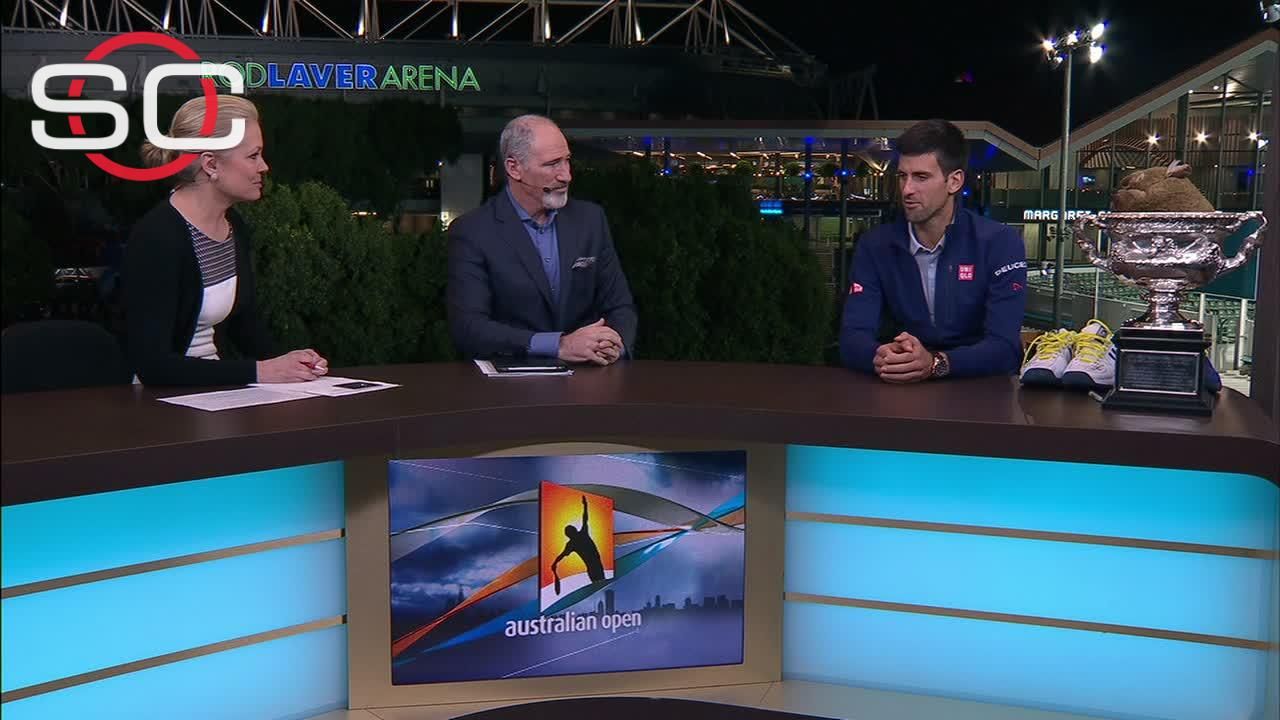