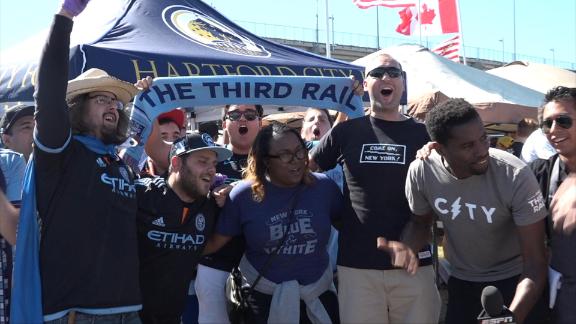 New York City FC will make a proposal to build a soccer stadium next toBelmont Park Race Track, according to a report by Newsday.

A source with knowledge of the situation confirmed to ESPN FC that the Belmont site is one of many under consideration by NYCFC. Major League Soccer declined to comment.

Empire State Development has put a deadline of Thursday for bids to develop entertainment options on the 43 acres of vacant land around the state's race track. The site is just outside of Queens in Elmont on Long Island.

NYCFC, which has shared Yankee Stadium since beginning play in MLS in 2015, would prefer a different site in New York City proper but wanted to place a bid to retain the option, Newsday reported.

The club is likely to go up against a rival bid from the NHL's New York Islanders, who are looking to get out of their lease at Barclays Center inBrooklyn.

A proposal from the New York Cosmos of the NASL was among those rejected by Empire State Development last year.

NYCFC was forced to move its game on Saturday to East Hartford, Connecticut, after Yankee Stadium's primary tenants needed to prepare for a rescheduled baseball game on Monday.

The move drew ridicule from fans and renewed calls for a long-awaited stadium for NYCFC, which is run by the City Football Group that also controls Manchester City.

WATCH: NYCFC's home away from home
Hear from NYCFC and their fans as Alexis Nunes recaps the club's home match played more than 100 miles from Yankee Stadium.