Odell Beckham Jr. flagged for simulating dog urinating on the field; has 2 TDs in loss 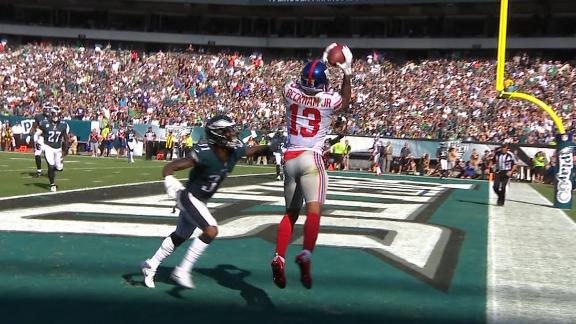 The New York Giants wide receiver caught a 10-yard pass early in the fourth quarter against the Philadelphia Eagles, dragging both feet in the end zone, and in his celebration, he appeared to walk like a dog and simulated a dog urinating on the field.

"I'm a dog, so I acted like a dog. I don't know if the rulebook said you can't hike your leg. He said I peed on somebody, so I was trying to find the imaginary ghost that I peed on. But I didn't see him," Beckham told reporters following the Giants' 27-24 loss.

Beckham didn't think there was anything wrong with the celebration.

The Giants were penalized 15 yards on the ensuing kickoff. The Eagles returned that to the 29-yard line.

"It does [pick up a penalty]," Beckham said. "[Kicker Aldrick] Rosas covered it. It didn't end up being detrimental, which is the main thing."

Giants coach Ben McAdoo said he didn't have an opinion on the unsportsmanlike penalty.

"I'm going to have to see what took place there," he said.

He did see the result.

"We don't want to be kicking off from the 20-yard line," McAdoo said. "That's not smart football, and we aren't playing smart football."

Beckham missed his team's opener because of an ankle injury. He returned last Monday night against the Detroit Lionsbut was limited.

He said he felt better on Sunday, and it showed. Beckham scored again late in the quarter on a one-handed, acrobatic catch in the corner of the end zone, and afterward, he raised his fist in the air to celebrate.

The protest, one of several around the NFL on Sunday, came in the wake of President Donald Trump's recent comments and tweets on NFL player protests during the anthem.