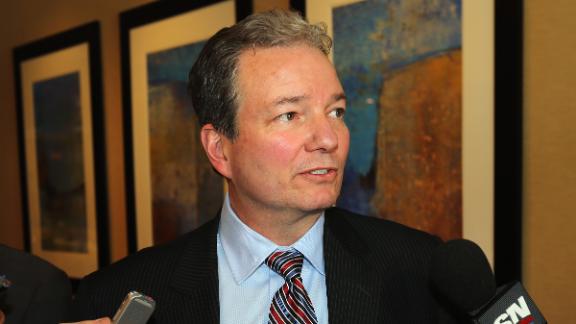 PITTSBURGH -- The Pittsburgh Penguins fired general manager Ray Shero on Friday while the status of coach Dan Bylsma will be evaluated.

Team co-owners Mario Lemieux and Ron Burkle said it was time to take the franchise in a new direction after the team's latest playoff flameout. The Penguins lost to the New York Rangers in the Eastern Conference semifinals this week.

Assistant general manager Jason Botterill will serve as general manager on an interim basis while the team searches for Shero's replacements. There were media outlets that initially reported Bylsma had been fired along with Shero.

The Penguins rolled to the Metropolitan Division title this season but failed yet again to produce a bookend to the championship they won with stars Sidney Crosby and Evgeni Malkin in 2009. Pittsburgh is just 4-5 in playoff series since raising the Stanley Cup after blowing a 3-1 series lead against New York.

"We share the disappointment of our fans that we have not had success in the playoffs over the past five seasons," Lemieux and Burkle said in a joint statement. "We believe that new leadership in the general manager's office will bring a new approach and new energy, and help us return to championship form."

"This is a decision that's been in the works for a long time since we've won the Cup," Morehouse said. "We wanted to get back to the Stanley Cup finals and we haven't and we're going to make some changes."

The Penguins hired Shero in 2006 and tasked him with building a foundation around Crosby that could turn Pittsburgh into a dynasty. The Penguins reached the finals in 2008 and won it all the following season thanks in part to Shero's ability to find the right supporting cast to build around Crosby and Malkin's otherworldly offensive talent.

Shero remained aggressive in investing in a "win now" mode as the ensuing disappointments piled up. He wasn't afraid to go "all in" as he put it last year after trading for Jarome Iginla, Jussi Jokinen, Brenden Morrow and Douglas Murray at the deadline. The moves often created headlines but little else, and splashy moves and a sellout streak seven years and counting proved no longer enough for Shero to keep his job.

Morehouse believes Shero's replacement won't need to make an overhaul. It's why the team started what will be a busy offseason by focusing on who will call the shots, not take them.

"What we wanted to do first is address the situation at the top and the leader of the organization is the general manager," Morehouse said. "It's not a complete rebuild. This is a team that has had a level of success. What we're trying to do now is get from good to great."

Whether Bylsma will be along for the ride remains unclear.

The affable, open-minded Michigan native was a revelation when the Penguins promoted him from their American Hockey League affiliate in the spring of 2009, hoping his optimism would help a loaded team break out of a midseason funk.

It worked brilliantly. Four months after taking the job, the former NHL nomad who spent nine seasons as a gritty fourth-line forward was raising the Cup in triumph. Considering Crosby and Malkin were both in their early 20s at the time, more parades were expected.

Five years later, the wait continues. While Pittsburgh enjoyed nearly unparalleled success in the regular season -- including easily capturing a division title this year despite losing more than 500-man games to injury -- the Penguins again struggled to adapt in the postseason.

Morehouse said the new general manager will determine whether Bylsma and the rest of the stack gets another shot. The 43-year-old Bylsma has two years remaining on his contract, the product of an extension he received last June as a vote of confidence from Shero following a four-game sweep at the hands of Boston in the Eastern Conference semifinals.

The extension came with a promise to adopt a more defensive-minded approach. The Penguins even brought in longtime NHL coach Jacques Martin as an assistant, an old-school yin to Bylsma's new-school yang.

It led to a similar destination: the Penguins watching the final stages of the two-month slog to the Cup go on without them. Now they'll try to get back to the top with a new architect.

"A lot of teams would like to be where we are," Morehouse said. "However we do have high expectations and we do want to get to them."

Breaking Down The Rangers' Game 7 Win
Scott Burnside and Katie Strang discuss the the Rangers' big win over the Penguins in Game 7.