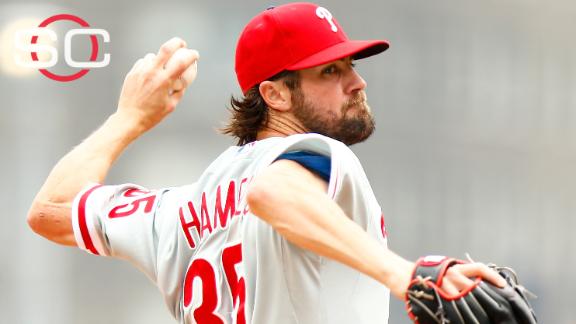 Cole Hamels will miss his scheduled start Friday with what the Philadelphia Phillies called a right hamstring strain.

Some members of his team thought the news, combined with a 2-1 win over the Baltimore Orioles on Thursday, made for a perfect spot to play a prank.

When the clubhouse opened following the victory, which ended a nine-game losing streak, Hamels' locker was empty and his nameplate above it was gone. With the ace left-hander the subject of trade rumors for much of the past six months, it appeared perhaps the Phillies had struck a deal.

Not so, a team spokesman said.

No player owned up to the deed, though several were laughing about it. The team spokesman said he didn't know who was responsible.

"I don't know anything about Cole," he said.

Hamels has been one of the lone bright spots for Philadelphia this season, compiling a 5-5 record with a 2.96 ERA.

The three-time All-Star threw seven innings of shutout ball last Sunday against the Pittsburgh Pirates. It's not clear if he was hurt in that game.

Right-hander Phillippe Aumont will be called up from Triple-A and start for the Phillies on Friday against the St. Louis Cardinals. It will be his major league starting debut.