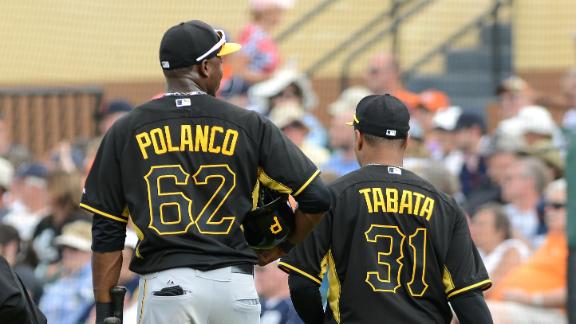 PITTSBURGH -- Gregory Polanco is ready for his major league debut.

The Pittsburgh Pirates called up their coveted outfield prospect late Monday night after placing second baseman Neil Walker on the 15-day disabled list, and he will hit second and start in right field against theChicago Cubs on Tuesday night.

Pirates fans have been waiting eagerly for Polanco to arrive. The 22-year-old from the Dominican Republic was hitting .347 with seven home runs in 62 games for Triple-A Indianapolis.

ESPN Baseball Insider Keith Law ranked Polanco as the 13th-best prospect in baseball entering the 2014 season and moved him up to No. 3 in his latest rankings released late last month.

Polanco's 47 runs scored lead the International League, and his batting average and OPS (.945) each rank second.

The wait is over.... My dream has officially come true ⚾️ Pittsburgh, see you mañana!!

- Gregory Polanco ☕️ (@El_Coffee) June 10, 2014Polanco's arrival will likely move utility player Josh Harrison to second base. Harrison has sparkled in right field since being given the job on a full-time basis last month. He played second Monday night after Walker was scratched.

Walker experienced abdominal pain shortly before Pittsburgh's 6-2 win over the Cubs on Monday and underwent an emergency appendectomy.

Thank you all for the well wishes, I'll be back soon! Ticked I won't get to see Polanco debut in person. pic.twitter.com/QfMjTlr7zy

- Neil Walker (@NeilWalker18) June 10, 2014Information from The Associated Press was used in this report.