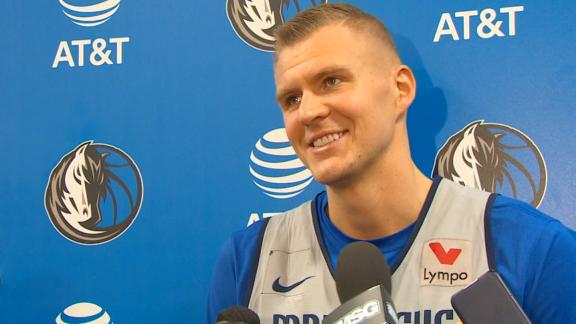 On Jan. 31, the New York Knicks made a stunning trade, sending Kristaps Porzingis to the Dallas Mavericks. Their hope was that saving approximately $70 million in salary cap space gained by dealing Porzingis and shedding Tim Hardaway Jr.'s contract (he was also part of the trade) would lead to some big results in free agency.

Instead, the Knicks struck out on a superstar class headlined by Kyrie Irving and Kevin Durant, and now own the NBA's worst record heading into their visit to Porzingis and the Mavericks on Friday night.

The Knicks used the fourth pick in the 2015 draft on Porzingis, who was booed on draft night by some fans. In 186 games for New York, Porzingis averaged 17.8 points, 5.4 rebounds and two blocks while shooting 36.1 percent from 3-point range. He drew comparisons to recently retired Mavericks legend Dirk Nowitzki and was called a "unicorn" by Durant.

Porzingis last played for the Knicks on Feb. 6, 2018, when he tore the ACL in his left knee on a dunk in a game against Milwaukee. When he met with the front office in late January 2019, management believed Porzingis wanted a trade, so the club dealt with him Trey Burke, Courtney Lee and Hardaway for DeAndre Jordan, Wesley Matthews, Dennis Smith Jr and first-round picks in 2021 and 2023.

The Knicks aspired to use the cap space on a star but wound up signing several forwards, including Marcus Morris and Julius Randle, to join a young group that includes first-round pick RJ Barrett and last year's draft class of Kevin Knox and Mitchell Robinson.

So far, it has led to seven losses in eight games, matching New York's second-worst eight-game start in team history and worst since 2009-10, when the Knicks were saving cap space in an attempt to land LeBron James.

Meanwhile, Porzingis signed a five-year, maximum contract worth $158 million, and the Mavericks are off to a 5-2 start while pairing Porzingis with second-year guard Luka Doncic. Doncic is averaging 26.7 points, 9.9 rebounds, 9.1 assists, while Porzingis is averaging 19 points, 8.1 rebounds and 2.3 blocks.

Porzingis enters Friday shooting (17-of-44) in his last three games and tied a season-low with 10 points Wednesday, but the Mavericks got 27 from Doncic and held on for a 107-106 victory over Orlando.

"I have to get the feel back. I have to get it back," Porzingis said. "The spots that I'm getting to get my shots are not maybe the usual spots that I was getting used to when I played in New York.

The Knicks head into Friday on a four-game losing streak since Bobby Portis led a pulsating comeback Oct. 28 against Chicago. After losing on a last-second shot by Jayson Tatum last Friday in Boston, the Knicks were blown out against Sacramento and Detroit.

On Wednesday, the Knicks lost Robinson to a possible concussion that could keep him out Friday. They also did not have Smith, who is out due to the death of his stepmother. In their latest loss, Randle scored 20 points, but the Knicks were outscored 58-43 after halftime.

"It's tough," Randle said. "You try to look at the long-term perspective of where we'll be at the end of the season, and are we taking the right steps to get there. I think we are, but in the short term, it's tough losing."

Dallas has won 27 of the last 35 meetings with the Knicks. Coincidentally Dallas recorded a 114-90 win in New York the night before the Porzingis deal, when Smith recorded a triple-double (13 points, 15 assists and 10 rebounds).