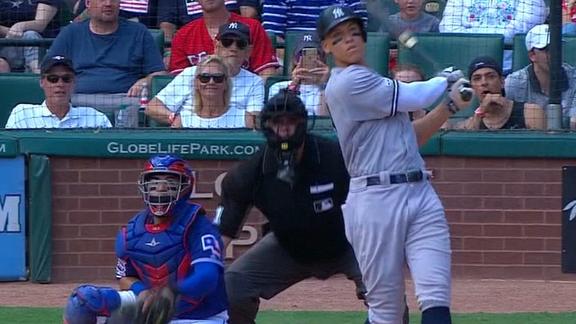 ARLINGTON, Texas -- Lance Lynn took the mound treating the finale at the Texas Rangers' ballpark like a playoff game.

The AL East champion New York Yankees are actually headed to the postseason after their most wins since the 2009 team that went on to the World Series title.

Lynn struck out 10, getting his career-high 16th win as the Rangers closed out the 26th and final season at their ballpark with a 6-1 victory Sunday over the Yankees, the team he finished with last season.

"What he did today was showed our team the possibility of what it would be like for our team to be a in a playoff game," first-year manager Chris Woodward said. "Our guys competed, in every aspect of the game, applied pressure to a really good team and we beat them the last two games."

"It's been something special, but I always grade our season, to be honest, on how we do in the postseason," Judge said. "My motivation is I've never been" to the World Series.

In the latest injury in a season filled with them, New York third baseman Gio Urshela left in the fourth inning after spraining his left ankle sprain after he fielded Nick Solak's grounder toward the foul line and made a jump throw to first. The Yankees said the sprain was mild and manager Aaron Boone said there was no swelling.

"We just obviously decided to get him out of there right away just in case to get some ice on it, make sure we didn't have swelling in there," Boone said. "I don't expect it to be anything."

DJ LeMahieu was 0 for 3 and finished his first season with the Yankees with a .327 batting average, second in the AL to Chicago's Tim Anderson (.335). LeMahieu, who set career highs with 26 homers and 102 RBI, said he wasn't disappointed in a batting race he hadn't followed.

"I feel like I had a good year. ... Definitely happy with where I'm at and where we're at," LeMahieu said. "If it came down to the last couple days, I probably would have been locked in on it, but it wasn't that close."

Judge's homer was the Yankees' 306th, but Minnesota hit three Sunday to set a big league record with 307.

Nolan Ryan threw out the ceremonial first pitch at Globe Life Park in Arlington, and his catcher was Kenny Rogers, who threw a perfect game in the park's first season in 1994. President George W. Bush -- the team's former owner -- was in the stands for the 2,081st regular season game at the stadium, where the Rangers went 1,145-936. New York was 57-48, a .543 winning percentage that was the best for any visiting AL team.

Home plate was moved after the game to Globe Life Field, the $1 billion-plus new stadium with a retractable roof across the street.

Rangers second baseman Rougned Odor, who had 30 homers and 93 RBI, was 1 for 3 and finished with a .205 average, the lowest among 136 major league qualifiers.

Texas went ahead in the third when Shin-Soo Choo doubled and scored on an errant pickoff throw by Masahiro Tanaka (11-9). Danny Santana had an RBI single later in the inning to make it 3-1.

Lynn set career highs with 246 strikeouts and 208 1/3 innings in the first season of a $30 million, three-year contract. He joined Mike Minor to give the Rangers their first duo with 200 innings and 200 strikeouts in the same season since Ryan and Bobby Witt in 1990.

Yankees closer Aroldis Chapman pitched a perfect eighth with a strikeout and heads to the postseason with 15 scoreless outings in 16 appearances since Aug. 2. ... DH Giancarlo Stanton was 0 for 4 with two strikeouts and went 8 for 25 with two homers in nine games since his return from the injured list on Sept. 18. He played just 18 games this season.

Yankees: LHP James Paxton played catch before the game, and Boone remained optimistic that the lefty starter would be fine. Paxton was removed after the first inning of the series opener Friday because of tightness and discomfort in his buttocks. An MRI on Saturday showed only nerve irritation. Paxton will likely throw a bullpen or side session Tuesday or Wednesday. ... All-Star C Gary Sanchez played for the second time in three days since missing 10 games with left groin tightness. He was 1 for 3 with a single and strikeout while playing six innings behind the plate.

Rangers: The official opener at the new ballpark is March 31 against the Los Angeles Angels.