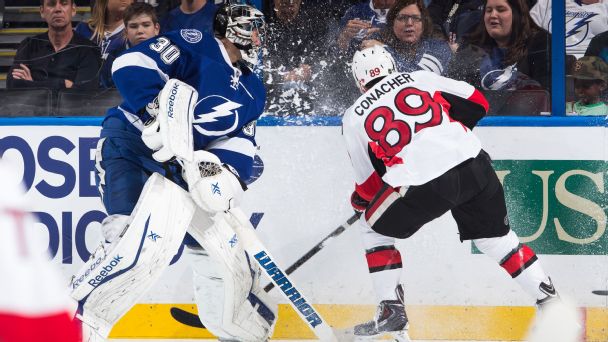 ESPN
By Rob Vollman
Since the salary cap was introduced to the NHL for the 2005-06 season, contractual matters are a heightened consideration in the weeks leading up to the trade deadline.

It's no longer enough for teams to get the right players, as cap considerations must be kept in mind for that season and down the line. Here are the 10 best examples of teams that have struck the perfect balance in getting the help they need without wrecking their cap situations in the short or long term:

At the time, Bishop was a 26-year-old backup with a career .911 save percentage in 36 games, and he was on a one-year contract with an annual cap hit of just $650,000. That's why the Senators might be excused for getting so little in exchange. Little did everybody know that he would soon be considered one of the league's best goalies. Since that date, Bishop ranks fourth in games played, with 277, and his .920 save percentage ranks ninth among those who have played at least 100 games in that span.

There's no question that Tampa Bay received tremendous value from Bishop. On April 15, 2013, Bishop signed a two-year extension with the Lightning, with an annual cap hit of $2.3 million. He went on to finish third in Vezina Trophy voting in 2013-14, and his stellar play in the 2014-15 postseason helped guide his team to the Stanley Cup Final.

In August 2014, Bishop signed another extension for 2015-16, but this time with a more representative annual cap hit of $5.95 million. He was runner-up in Vezina voting in the first season and was traded to the Los Angeles Kings at the trade deadline in the second.

Nashville was at risk of missing the playoffs and looking to reload, and Washington was poised to win its division for the fifth time in six seasons but had struggled in the playoffs, so it made sense for the two teams to swap a trusted veteran for a promising prospect. It just didn't make sense when considering the contractual value involved.

Erat had a strong reputation but was on the decline at age 31 and carried a healthy $4.5 million cap hit for two additional seasons. Meanwhile, Forsberg had three more seasons on his entry-level contract, which carried an annual cap hit of just $894,167. He used the latter two to lead the Preds in scoring, with 63 points in 2014-15 and 64 in 2015-16. After signing a six-year, $36 million contract the following summer, Forsberg led the Predators with 16 points on their way to the Stanley Cup Final in 2016-17.

It's not all bad for Washington, who had acquired Forsberg from Nashville in the first place, in a roundabout way. The Capitals acquired the pick used on Forsberg from the Colorado Avalanche in a trade for Semyon Varlamov, who had been drafted using a pick that had been acquired at the 2006 trade deadline from the Predators for Brendan Witt. In a sense, everything came full circle in the end.

One of the key factors behind Pittsburgh's Stanley Cup victory in 2008-09 was the instant chemistry between Kunitz and Sidney Crosby. Kunitz scored 18 points in 20 games down the stretch and added 14 more in 24 games in the playoffs.

Kunitz's contributions didn't end there, as he spent eight more seasons with the Penguins, helping them win the Stanley Cup on two more occasions. He initially struggled with injuries, but then he scored 181 points in 208 games between 2011-12 and 2013-14 and was named a First-Team All-Star in 2012-13.

The Penguins even saved a little bit of cap space on the deal. Kunitz was on the first of a four-year deal with an annual cap hit of $3.725 million, which is $275,000 less than the $4.0 million cap hit for Whitney, which would continue for four additional seasons after the trade.

As for Whitney, he was traded at the following year's deadline, this time for Lubomir Visnovsky, who scored 68 points in 81 games the following season, while finishing fourth in voting for the Norris Trophy and being named to the Second All-Star Team.

It can be hard to separate one deadline acquisition's impact from another, so we'll place Pittsburgh's two big moves from its 2008-09 Stanley Cup season side by side. In this case, Guerin was acquired for virtually nothing and scored 12 points in 17 games down the stretch and then 15 more in 24 playoff games.

Proving to be more than just a solid rental, Guerin signed an extension for one more season for just $2.0 million. Still in strong form, he scored 21 goals and 45 points in the regular season and added nine points in 11 games in the playoffs.

Since the winger was 41 at the time of the trade, it's excusable if the Lightning felt that Recchi's contributions were essentially at their end. Surprisingly, the Hall of Famer had one more Stanley Cup and 137 points left in the tank, including 30 in the playoffs. To make matters even better for the Bruins, Recchi re-signed for just $1.0 million per year for both of those seasons.

This wasn't the first time Recchi proved to be a great trade-season pickup. Three years earlier, he was acquired by Carolina, scored 16 points in 25 games down the stretch and helped the Hurricanes hoist the Stanley Cup.

In the salary-cap era, acquiring a versatile two-way player who signs a two-year extension with an annual cap hit of just $1.7 million is just as significant as landing an All-Star.

That's not to suggest that Jokinen was a secondary player. His league-leading three game-winning goals helped the Hurricanes reach the Conference Final that season. He scored 30 goals the following season, and his 185 points in 288 total games with the Hurricanes ranked second on the team in that time, to Eric Staal's 293.

He might not have the same reputation as Ilya Kovalchuk, Dany Heatley or Marian Hossa, but Wheeler has been the Thrashers/Jets organization's top scoring machine since the day he arrived.

Wheeler scored 17 points in 23 games down the stretch of the 2010-11 season and has finished top two on the team in scoring ever since, including three seasons in the top spot. Given that his 60 points currently lead the Jets by 18, he's nearly a lock to make that four. In total, Wheeler has scored 464 points in 532 games since he was acquired, which ranks 10th in the NHL and well ahead of Bryan Little's 330 for the franchise lead in that time.

Contractually, Wheeler was a pending free agent, and he tested the market before re-signing a two-year deal with an annual cap hit of just $2.25 million. This trade might have been what helped tilt the negotiation in this franchise's favor.

Staring down the prospect of a franchise-worst sixth consecutive postseason absence, the Kings' acquisition of the future poster child for shot-based metrics helped lead to five straight appearances, which included two Stanley Cups.

In Williams' six full seasons with the team, the Kings outshot opponents 6,149-4,277 with Williams on the ice at 5-on-5, for a league-leading Corsi differential of plus-1872 between 2009-10 and 2014-15. In terms of percentages, the Kings' share of on-ice shot attempts improved from 52.60 percent to 58.98, giving Williams a relative Corsi of plus-6.38 percent, which ranked second in the NHL to that of teammate Jake Muzzin.

Contractually, Williams had two more years with an annual cap hit of $3.5 million, which was only $575,000 more than what the Kings cleared by moving O'Sullivan ($2.925 million). That's a small price to pay for one of the key ingredients to the team's two-time Stanley Cup success.

With 26 points in 20 games, Hossa was a key factor in helping the Penguins advance to the Stanley Cup Final for the first time since their back-to-back victories in 1990-91 and 1991-92.

However, the trades on this list are more than just effective free-agent rentals. In this case, Dupuis immediately re-signed with the Penguins and earned a total of $7.3 million in the following five seasons, which is less than half that of the players given up, who earned a combined sum of $14.75 million. In exchange, Dupuis scored 227 points in 441 games, almost matching the 252 points in 642 games by Christensen & Co.

Some of the appeal of this trade has faded due to the fallout from the 15-year, $100 million contract Kovalchuk signed the following September and his retirement to the KHL three years later. However, his arrival had such a transformational impact on the organization, and acquiring him late that season is what gave the Devils the edge in signing the hotly pursued free agent the following summer.

In particular, Kovalchuk was pivotal in getting the Devils to the Stanley Cup Final in 2011-12, leading the league with eight goals in the playoffs. Since then, the Devils haven't made the playoffs, the closest anyone has come to Kovalchuk's 83 points that season is 67 by Jaromir Jagr in 2013-14, and the closest any Devils forward has come to his jaw-dropping average of 24:32 minutes per game during his final two seasons with the team is the20:18 averaged byTravis Zajacin 2013-14.