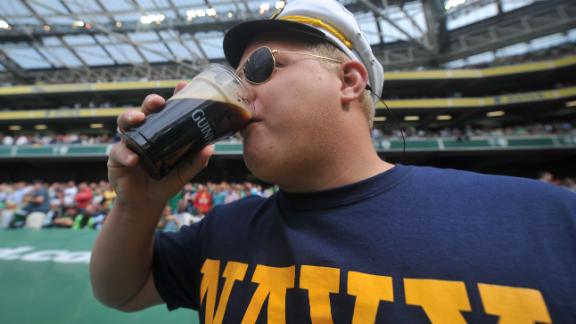 ESPN
Some cash-strapped athletic departments outside the Power Five conferences have started to use beer sales as an alternative revenue stream -- and more could soon be following suit.

While beer drinking is a common sight at tailgate parties outside of college football stadiums, a growing number of schools are bringing the party inside, opening taps in concourses that traditionally have been alcohol-free zones.

North Texas, SMU and Troy University will begin beer sales to the general public this season. They're among 21 on-campus football stadiums where any fan of legal age can grab a brew. That's more than twice as many as five years ago.

"Every institution is looking at how they can increase revenue streams, and alcohol is one of those," said Jeff Schemmel, president of consulting firm College Sports Solutions LLC. "Everything is on the table."

Most schools continue to keep alcohol restricted to premium seating areas, if they allow it at all. But offering alcohol is increasingly attractive for some campuses, especially as schools look for ways to keep fans from staying at home.

They're also encouraged by the schools that were among the first to sell alcohol and didn't report an increase in bad behavior from students and other fans.

There are 11 municipal stadiums where FBS teams are tenants and alcohol is available to the general public. The municipality usually keeps most, if not all, of the alcohol proceeds. The NCAA does not sell alcohol to the general public at its championship events. Schools and conferences are allowed to make their own policies.

According to an Associated Press survey of the 21 beer-selling schools that own and operate their stadiums, about half their concessions revenue is derived from alcohol. All but four of those schools are in conferences outside the Power Five that don't earn significant television money.

Troy athletic director John Hartwell estimated that beer would account for $200,000 in commissions this season. According to its contract with concessionaire Sodexo, Troy will receive 43 percent of gross beer sales at its 30,000-seat stadium, or better than $2 for every $5 beer.

"That's more impactful to a bottom line for a Troy than it is for a Texas or West Virginia or institutions similar to that," said Hartwell, whose program runs on a $20 million budget. Alcohol proceeds will be used to pay debt on a $25 million expansion of Troy's football facilities.

The Big 12's West Virginia, with a budget of more than $80 million, began beer sales in 2011 in part to counter a problem with drunken fans coming and going from tailgate parties during games. Fans no longer are allowed to re-enter the stadium once they leave.

Beer sales have produced no less than $516,000 each of the past three years for West Virginia, and campus police report that alcohol-related incidents at Mountaineer Field have declined sharply.

Ross said a lot of tailgate partiers chug as much beer as they can before entering no-alcohol venues so they can "keep their buzz" throughout the game.

"Now these people will realize they can get one in the stadium and they don't need that last beer at the tailgate," Ross said.

Selling alcohol at college football games might seem counterintuitive at a time when there is so much concern about binge drinking on campuses. Mothers Against Drunk Driving national president Jan Withers said her organization opposes any alcohol in a college environment because most of the students are under 21.

"Kids are watching adults all the time," Withers said. "If they see the only way to have fun is to drink a lot, then they're going to model after that. That's not the message we want to be sending to them."

SMU reported no change in crowd behavior after alcohol was introduced at basketball games last season, even with Mustangs seeing huge gains in attendance. The average of 5,653 -- the highest since 1984-85 -- was up 64 percent over 2012-13.

SMU student body president Ramon Trespalacios said having beer available could boost football attendance, too. The Mustangs drew an average of 18,724 to their 32,000-seat stadium last season, a drop of 12 percent from 2012 and the lowest since 2008.

"Sometimes if you wanted to go to a game and were used to drinking beer, people chose to go to a bar instead of the venue," said Trespalacios, a 22-year-old graduate student. "It's good to bring everyone together and enjoy the same environment."

Still, just a handful of college stadiums are giving students and fans the chance to buy a brew. Most remain opposed to it. The Southeastern Conference and the 23-school California State University system, for example, have policies banning alcohol from general seating areas.

"I know why the question is relevant for some," Nebraska athletic director Shawn Eichorst said. "For me, the bottom line does matter. But at what point does it outweigh what you're trying to do, trying to keep the civility?"

Safeguards are used in an effort to keep drinking under control. A fan who wants to drink must obtain and wear a wristband indicating he or she is at least 21. Fans are limited to buying two beers at a time, and sales are cut off at halftime or in the third quarter.

"You do it because, yeah, we want to make some money on it," Wistrcill said. "But in this day and age, we're going to fight the 60-inch high-def TV since every game is available on an ESPN broadcast or on the high-quality Internet. How do we keep people coming to the stadium for the in-stadium experience?"