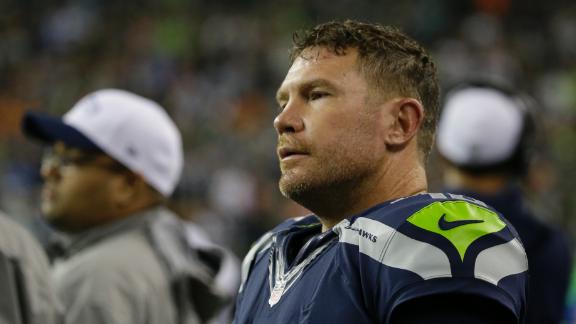 RENTON, Wash. -- The Seattle Seahawks have released rookie Nate Boyer, a 34-year-old former U.S. Army Green Beret who was trying to make the team as a long-snapper.

Boyer confirmed to ESPN on Tuesday that he has been released, a move that was first reported by Fox Sports. The Seahawks needed a roster spot to sign quarterback Jake Waters since backup Tarvaris Jacksonis likely out for at least the next two weeks with a high ankle sprain.

He tweeted about his release, telling fans not to feel sorry for him.

Boyer said in an interview with ESPN's NFL Live that his time with the Seahawks was "amazing."

"Just to have this opportunity to be able to call myself an NFL player," he said. "It might not be over, but if it is, I'm good with that."

He added that when Seahawks general manager John Schneider told him the news Tuesday, it appeared as if it hurt him "more than it hurt me."

Boyer said he isn't giving up on his NFL dream but if he isn't picked up by another team, "my journey doesn't end here, I promise you that."

Boyer made his NFL debut Friday, handling long-snapping duties in the second half of the Seahawks' preseason opener. He was credited with a tackle.

He led the team onto the field Friday, carrying an American flag.

"That was cool," he said, according to the team's website. "I was actually pretty emotional, just because I always think about my buddies who I fought with, or the ones who are overseas right now. And usually in college you don't stay out there for the national anthem, so that got to me too. That whole thing. But just knowing how many of those guys were watching, it's really special. It was neat."

Boyer served in Iraq and Afghanistan before joining the University of Texas football team and then signed with Seattle in May after going undrafted. At the time, Seahawks coach Pete Carroll and general manager John Schneidersaid the team could benefit from Boyer's presence, even if he was a long shot to unseat Clint Gresham as Seattle's long-snapper.

"He's just a phenomenal person, and he's a competitor, and he's tough and he represents a lot of really, really cool things that, quite frankly, I think would be really good for a lot of us to be around," Schneider said. "And he runs down and covers kicks, and he's really made himself into a legitimate snapper at Texas."

Waters, an undrafted rookie from Kansas State, worked out for the Seahawks earlier this month.

Waters went 17-9 during his two seasons as Kansas State's starter. He broke the school record for career completion percentage (64.1) and the single-season mark for all-purpose yards (3,985) despite playing through a shoulder injury as a senior. That shoulder injury required surgery, which kept Waters from attending the scouting combine and participating in his school's pro day.

Adding Waters gives the Seahawks a third healthy quarterback behind Russell Wilson and R.J. Archer. It also allows B.J. Daniels to remain solely at wide receiver, a position he switched to from quarterback earlier this offseason. Coach Pete Carroll said Monday that Daniels would take reps at quarterback so he could serve as the No. 3 if he were needed in a game, but that won't be necessary with Waters in the mix.

Boyer: 'My journey doesn't end here'
Former U.S. Army Green Beret and Seahawks rookie long-snapper Nate Boyer comments on the team's decision to cut him and what he plans to do next.