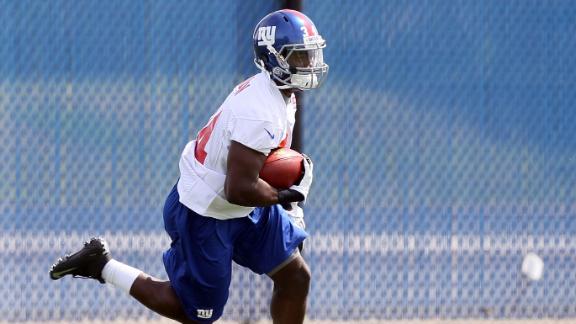 EAST RUTHERFORD, N.J. -- New York Giants running back David Wilson underwent a battery of tests on his neck Tuesday night and will not practice until at least next week.

Wilson, who left Tuesday's practice with what coach Tom Coughlin called a "burner," will be evaluated by Dr. Frank Cammisa at the Hospital for Special Surgery on Monday. He will miss Sunday's preseason opener against Buffalo.

Cammisa, who is the chief of spine services at the hospital, is the same specialist who performed season-ending spinal fusion surgery on Wilson after Week 5 to correct a disk problem in his neck.

According to Tuesday's practice report, Wilson "caught a shovel pass from Curtis Painter, turned upfield with his head down and ran into the back of guard Eric Herman. Wilson was surrounded by several defensive players, and when the scrum separated, linebacker Mark Herzlich had the football and two athletic trainers were running toward Wilson."

"We were all praying that it would not be an issue, that he would be able to come back and go to work," Coughlin said Tuesday. "But we'll see."

Wilson, the Giants' first-round pick in the 2012 draft, had been cleared for contact on July 21, and he has been practicing as normal with the team.