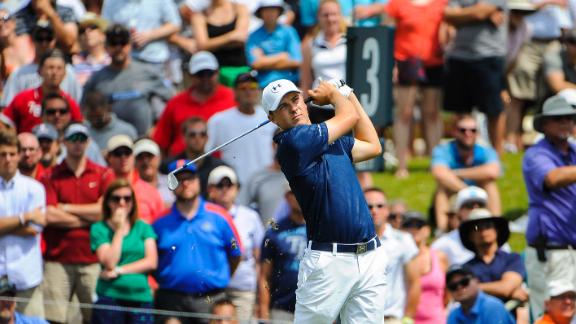 PONTE VEDRA BEACH, Fla. -- Jordan Spieth couldn't see any of the 240 yards to the green on the toughest hole at the TPC Sawgrass. He was in the rough so far right of the 14th fairway that he was closer to a water hazard on No. 12 that he didn't know even existed. His ball was on the back side of a mound. One wrong move could have led to a big number.

The contact was perfect. The ball landed about pin-high in a bunker, setting up another par.

It was like that all day at the Players Championship.

Every time the 20-year-old Texan landed in trouble, he answered with a recovery shot, a chip-and-run, and always a putt that kept him without a bogey through 54 holes and gave him a share of the lead with Martin Kaymer going into the final round.

Spieth's final act was an escape through the trees on the 18th hole and a 12-foot par putt from the fringe for a 1-under 71. Kaymer missed his par putt from just inside 10 feet on the final hole and had to settle for a 72.

Not since Greg Norman won the Players in 1994 has anyone gone through the opening three rounds without a bogey. Then again, Spieth has shown over the last year that he is capable of remarkable feats.

"I didn't play with him the first two days, but there were a couple today where you think it's a tough one to save par, and he always pulled it off,'' Kaymer said. "If it wasn't a brilliant chip, it was a good putt. So it's very tough to beat those guys that don't make mistakes. ... Seems like he doesn't make many mistakes.''

Kaymer wasn't too shabby on the toughest day all week at Sawgrass -- warm, humid, blustery and increasingly frightening. He picked up a pair of birdies on the front nine to build a two-shot lead, only to lost two birdie opportunities on the par 5s on the back nine.

Even when he heard a few cheers after missing his par putt on the 18th, which allowed Spieth to share the lead, Kaymer was in a good spot. A former world No. 1 and major champion, Kaymer is trying to end more than two years without winning.

"It's very important that you enjoy the day,'' Kaymer said. "It's a rare opportunity that you're in the leading group (in) one of the biggest tournaments we play all year.''

For Spieth, who still didn't have a PGA Tour card last year, the final group is familiar territory. He has contended on the weekend in four tournaments already this year, and only a month ago had a two-shot lead with 11 holes to play in the Masters until he finished in a tie for second behind Bubba Watson.

"Augusta left me feeling a little hungry for it again, and here we are,'' Spieth said. "And I have an opportunity to kind of really draw back on that round and the positives, the negatives and everything in between and go out there tomorrow and try and play the same way I played the first two rounds.''

Even so, he knows he'll have to play better and possibly score better. There were some good bounces -- a soft bounce on a wedge at the 16th that possibly prevented his ball from going into the water -- and some good breaks, such as getting a free drop from a drain in the rough that took pine trees out of his line on the 15th.

Spieth repeatedly pumped his fist when his final par putt dropped into the cup, a clutch moment worth celebrating. He now has gone 69 consecutive holes dating to Hilton Head without making a bogey. The question is whether that streak can last as the pressure increases.

"I was all over the place,'' Spieth said. "In order to win, I'm going to have to drive the ball better. Today I got the breaks, got the bounces, and made the 3- and 4-footers to stay alive. I'm not going to be able to keep doing that.''

This course gets tougher on the weekend, especially on Sunday.

And there were still plenty of players poised to either make a run or be waiting if either of the leaders slip up.

Garcia turned a birdie chance into a bogey on the 17th hole by missing a short putt. He did enough right in his round of 69 that he will have another chance to experience the thrills on the back nine of Sawgrass. Along with winning in 2008, he was tied for the lead going to the 17th hole last year until hitting three balls in the water the rest of the way as Tiger Woods went on to win.

Senden won at Innisbrook earlier in the year and played the par 5s in 5 under, including an eagle at No. 9.

Justin Rose was in the group at 7-under 209 until it was determined after his round that his ball moved slightly before he chipped it on the 18th. That turned his par into a double bogey and he wound up seven shots behind.