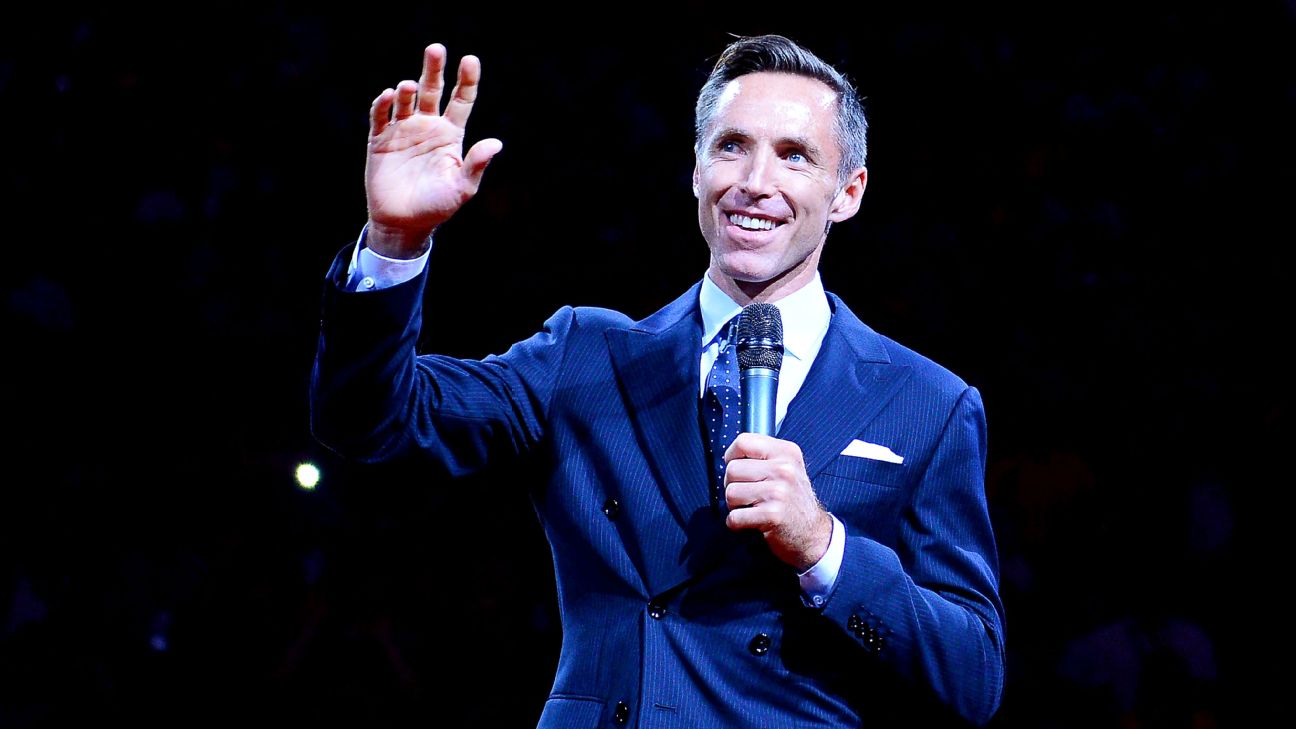 Steve Nash went from an unknown kid from Canada to a college basketball star. After struggling early in his NBA career, the point guard became an eight-time NBA All-Star and a back-to-back NBA Most Valuable Player. And now for the next mammoth basketball challenge in the Naismith Memorial Hall of Famer's life, he is the new coach of the Brooklyn Nets, starring Kevin Durant and Kyrie Irving, without ever having coached before.

"The why is that I love to teach. I love to learn," Nash told ESPN's The Undefeated in a phone interview Thursday. "I love being a part of a team and building a team. And I love to compete. It has all the ingredients in terms of satisfying growing as a person, leading a team and a group of people. Learning from the people and the game. Being part of an organization and a culture. And then competition.


"Those are the ingredients that excite me and put me in a position to be thrilled to take this opportunity."

Nash has kept a low basketball profile since retiring from his 19-year NBA career in 2015. The soccer fanatic has not been a basketball analyst on television, but he has been a Champions League soccer analyst for Turner Sports. Annually during NBA draft week, Nash hosts a celebrity charity soccer game with basketball and soccer players and other celebrities in New York City. Occasionally, Nash has been seen working out Golden State Warriors players after practice as a player development consultant. But outside of that part-time gig, the native of Vancouver, Canada, has probably spent most of his energy on being a father and a husband.

So, it certainly was a surprise that Nash had interest in being an NBA head coach.

"The coaching itch was always there. In a way I kind of kept it to myself to give me the freedom of not being on the radar of coaching expectancy," Nash said. "I've always known in the back of my mind that I'd love to do it. But what was holding me back in many ways was my family. I just really wanted to preserve that time with my kids that I've earned from the good fortunes of playing professional basketball and have as big of an impact on their lives as I can.

"What I realize as well is this is a family move and a family decision. It checks all the boxes in terms of pursuit and passion for me. But for my kids to see another part of the world and a historic city like Brooklyn is a great opportunity for my family, too. You learn from travel. You learn from change, being pushed into a new environment and taken out of your comfort zone."

The biggest question for Nash is how will a rookie head coach handle two superstars in Durant and Irving?

Perhaps what will help is that Nash has a relationship with both that dates back several years. It was not uncommon to see Nash working out Durant after practices while the two-time NBA champion played for the Warriors from 2016 to 2019. Durant would often be seen using some of Nash's one-leg basketball workout routines prior to games.

"We both love the game of basketball. We got a bond, over me in a sense being a teacher and a pupil through the years," Nash said. "It dates back to when I was finishing my career and we would work out together, and working with him with the Warriors. ... I think that there is a trust, a commonality and a language between us when it comes to the game that has developed over time. That definitely is important. He's one of the greatest players I've ever seen and to have his confidence is really important."

Durant missed the entire 2019-20 NBA season after rupturing his right Achilles tendon with the Warriors during Game 5 of the 2019 NBA Finals. Due to the coronavirus pandemic, the 2014 NBA MVP is expected to have ample time for recovery prior to the unknown start of the 2020-21 season. Nash is optimistic that Durant will be ready to make his Nets debut when next season begins, and added that the 10-time NBA All-Star supported his appointment as head coach.

"Kevin looks good and feels good from what I'm hearing," Nash said. "There is still an adaptation process that he is going through where he is healthy enough to do just about anything. But you still have to have time to adapt and fortify that recovery. He is going through the process now to create that durability and staying power with his Achilles and withstand the demands of the NBA game and schedule."


Nash added he and Irving have had a relationship for years, and that the six-time All-Star, who is known for being headstrong and introspective, was supportive of his hire as well.

"Ky and I have history, not only being two point guards, but he is one of my favorite players to watch," Nash said. "He and I spent a couple days in the gym, I believe it was 2015, in New York City working out. There is a respect and admiration there for me. For me and Ky, our relationship is important. He is the point guard and I'm the coach, and I'm thrilled I get the opportunity to know him better and to understand him, how he plays and what he sees and be here to help him refine his gifts."

Nash says he's excited to "build together" with Durant and Irving and that he spoke with both players before taking the job.

"Frankly, we're just all excited. It's that honeymoon period," Nash said. "We are all thrilled we get a chance to do this and do this together. Shortly, we will get to work. Unfortunately, it won't be necessarily on the court with the guys. But in terms of doing work behind the scenes, we will continue to build our culture."

Nash inherits an NBA championship-caliber roster that has never won a title.

"I'm fortunate to have this roster. We have a lot of talent. A lot of versatility," Nash said. "Let's be clear, I feel grateful for the roster I have."

Nets interim head coach Jacque Vaughn will remain on Nash's staff as an associate head coach, sources told ESPN's Adrian Wojnarowski. As a rookie head coach, Nash said it's important for him to have "experienced coaches around me that are mentoring and supportive" that also have character. He expects to have a collaborative environment with his coaching staff and be a "mini-team together that challenges itself to grow."

"I am a rookie coach. I have relatively no experience coaching," Nash said. "What I do have is a ton of experience playing the game, thinking the game and leading my team. I have to catch up, learn, study and grow and ask questions, find answers and solutions and strategies that fit my principles. I also have confidence in what I bring to the table.

Joe Tsai became the governor of the Nets, chairman of Barclays Center and chairman of J Tsai Sports on Aug. 16, 2019. The billionaire Alibaba co-founder purchased the Nets for $2.35 billion.

Nash has a longtime friendship with former Phoenix Suns teammate Sean Marks, who is general manager of the Nets.

"I just said I was ready," Nash said when asked how he sold himself to ownership and management. "I said I wanted it and shared my vision and my methodology. What I bring to the table and how I want to influence the group the more I see it going forward. Those are details and talking points that every coach has. I hope they really value the approach. But at the same time a big part of it is my history, and having trust in the way I see the game and coach the game.

"Sean Marks and I played together 15 years ago and played against each other internationally for 20 years. There is a relationship, understanding and conversations over the decades. That has to be a factor as well."

Nash made calls to several NBA colleagues to let them know he landed the job prior to the Nets' announcement. One coach who could relate and got advance notice was Steve Kerr, who became coach of the Warriors in 2014 with no previous coaching experience and has since led the franchise to three NBA titles.

Along with picking Kerr's brain, Nash plans on reaching out to several coaches he is connected to for advice.

"He was thrilled for me. I definitely lean on him for advice and he will be incredibly helpful in the interim," Nash said of Kerr. "We didn't have a long chat, but we had a joyous conversation. He was excited. I know we will be in touch soon as I go through this process and learn. One thing that has been incredible to see from afar is the coaching fraternity and coaching tree and how coaches are so willing to share and to help. Frankly, they are competitors, but fellow coaches more importantly."

Nash has had an offseason residence in New York City for years in Tribeca and is a big fan of the area.

"I spent enough time in Brooklyn; not a ton of time," Nash said. "It's one thing my family and I are thrilled for, the opportunity to live in the famous borough. We value its history, its cultural fabric and its mentality. It's exciting for my family. I spent many summers in New York City and went to Brooklyn to play soccer games and stuff like that. That is the exciting part, is getting to live in an incredible part of the world."
Report a correction or typo
Related topics:
sportsespnnewskevin durantkyrie irvingnbabrooklyn netssteve nash
Copyright © 2021 ESPN Internet Ventures. All rights reserved.
More Videos
From CNN Newsource affiliates
TOP STORIES