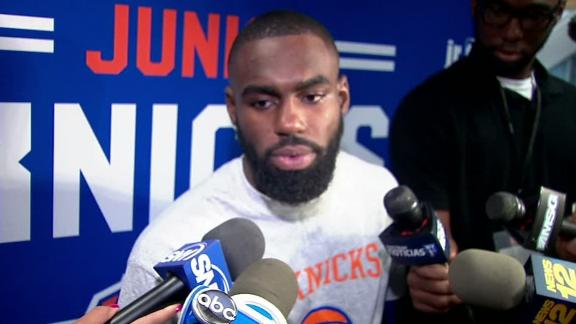 NEW YORK -- New Knick Tim Hardaway Jr., who was close to Carmelo Anthony during his previous stint on the New York Knicks, says it's an "odd feeling" knowing that Anthony may be traded.

Hardaway knows that Anthony has to do what's best for his family and himself, but the young shooting guard made clear on Monday that he'd like to see Anthony remain in New York.

"Yes, we definitely want him back -- no question," Hardaway said during an introductory meeting with the media at Knicks youth camp. "Just having that veteran leader out there on the floor, a go-to guy who can get you a bucket any given moment of the game, it's great. It's great to have that. You want to have that. It'll be tough for him to leave. But like I say, he has to do what's best for him and his family."

New York's signing of Hardaway to a four-year, $71 million offer sheet is expected to trigger a renewed willingness to work with the Houston Rockets on trade scenarios to unload Anthony, league sources told ESPN's Adrian Wojnarowski.

The Rockets have been persistent in their pursuit of Anthony, who is willing to waive his no-trade clause to join Chris Paul and James Harden in Houston, league sources told Wojnarowski. The Knicks do not imagine a scenario where Hardaway is sharing the floor with Anthony to start the season, those sources say.

Both the Knicks and Anthony, per league sources, were feeling confident as of Sunday afternoon that a deal of some sort could be worked out to send Anthony to another team.

With Hardaway, big men Kristaps Porzingis and Willy Hernangomez, and first-round pick Frank Ntilikina, the Knicks feel that they have a core of players age 25 or younger to build around.

They are hoping to bring back younger players in any trade of Anthony, sources told ESPN's Ramona Shelburne.

Knicks general manager Steve Mills, who will be handling the Anthony transaction, noted Hardaway's youth and athleticism when announcing the signing.

"As a versatile wing whose game continues to improve, [Hardaway] will fit right into the core of players that make up a roster emphasizing youth, athleticism, accountability and unselfishness," Mills said.

Hardaway on Monday said he was "happy, excited and overwhelmed" to return to the Knicks, the franchise that drafted him with the No. 24 overall pick in 2013. Hardaway was traded from the Knicks by then president Phil Jackson on draft night in 2015 but was reacquired last week.

Hardaway thought about the possibility of returning to New York but didn't think it would happen at this point in his career.

"I'm not going to lie. I did think about it. Everything happens for a reason. When I got the call I was very, very happy. I was excited," the 25-year-old said. "It was another opportunity. With me being an older, more mature person, [I'm] taking this very, very serious."

The 6-foot-6 Hardaway had a breakout season in 2016-17 for Atlanta, scoring 14.5 points in 28 minutes per game. He made strides on the defensive end with the Hawks. After initially being sent to the D League and benched, Hardaway eventually developed into a key contributor in Atlanta. The Knicks made it clear to Hardaway that they expect that development to continue.

"They loved how I competed on both ends of the floor. They saw the energy I gave, and it was a great feeling just to hear all of that," Hardaway said. "...They said straight up, you have to obviously improve a lot more on defense and improve a lot more on the offensive end. So you can never settle."

Hardaway added that he's not shying away from the pressure that comes with a $71 million contract.

"I think I just have to come in with the same mindset I came in with last season. I know how much work I put in in the offseason, I know how much work I put in during the season," Hardaway Jr. said. "Yes there's pressure but you got to embrace it, you got to take it to heart. I'm ready to fulfill, to do whatever I have to do to help this team succeed as a ball player on and off the court."

The Knicks have a bit of a logjam at shooting guard, having also signed veteran Courtney Lee to a four-year, $48 million deal last summer. But the team has no plans to trade him at this point as the Knicks believe Lee and Hardaway can play well together given the value of shooting in today's NBA, sources confirmed. Hardaway said on Monday that he'd have no problem playing with Lee, comparing the situation to sharing the floor with Kent Bazemore while in Atlanta.

With the Hardaway contract in place, the Knicks at the moment have very little to offer free agents on the market.

The club renounced its rights to free agents Derrick Rose, Sasha Vujacic and Ron Baker to make room for the contract. They also withdrew a qualifying offer to Baker, who was a restricted free agent. Baker, though, already has agreed to a deal with New York. The terms are unknown.

With their current cap situation, the Knicks can sign Baker with a veteran's minimum exception or with part or all of the $4.3 million room exception.

The room exception, a small amount of cap space and veteran's exceptions are the only tools the Knicks have to offer free agents. The club is looking for a veteran point guard to mentor rookie Ntilikina but has limited resources to find one. Rose and Rajon Rondo are among the free-agent point guards remaining on the market.

The Knicks could also obtain a point guard via trade or could open up more cap space in any trade of Anthony. 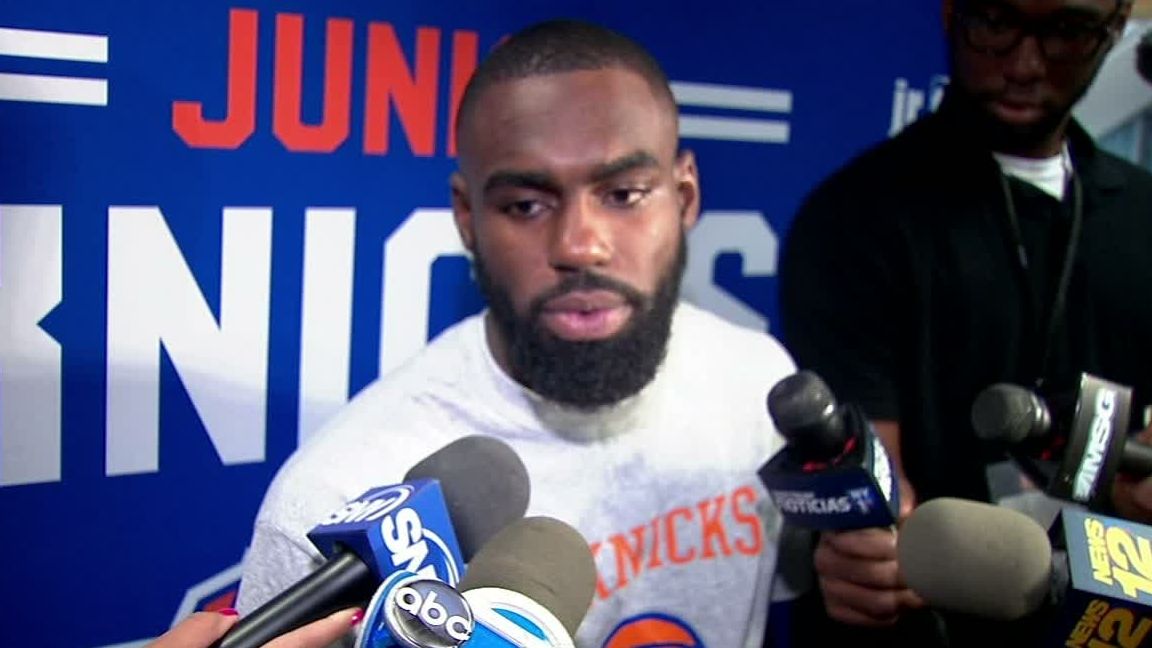 Hardaway hopes Melo stays in New York
Tim Hardaway Jr. shares that he learned a lot from Carmelo Anthony when he was a rookie with the Knicks and hopes to have his scoring ability on the floor.